A mother and daughter are snatched on their way home from the cinema. The crime bears a number of chilling similarities to a cold case Prof. Nick Fennimore was involved in. Then Nick begins receiving taunting messages – is he being targeted by the kidnapper?

Meanwhile, a photograph emailed from Paris could bring Fennimore closer to discovering the fate of his daughter Suzie, now missing for six years. He seeks help from his old friend, DCI Kate Simms, recently returned from the US. But Kate is soon blocked from the investigation… The mother and childs’ lives hang in the balance as Fennimore and Simms try to break through police bureaucracy to identify their abductor.

This was the first AD Garrett book I have read and I have just realised that I already have the first in the series on my kindle – I really must look at my backlog of TBR books!!! #TooManyBooks #SoLittleTime – but I can tell you it won’t be my last!

The plot focuses on Prof Nick Fennimore’s ongoing hunt for his missing daughter and his relationship with DCI Kate Simms who has just returned from the USA where it would appear she had been trying to salvage her career and boost her reputation following some trouble she and Nick had been involved in previously (I really do need to read the rest of the books to fulfill my desire to know what is going on!!!) Meanwhile a mum and her daughter have been kidnapped on the way home from the cinema and Nick is persuaded to investigate a miscarriage of justice by a journalist that he appears to hold in contempt. The three plots flow seamlessly together and provide a rollercoaster ride for readers as they piece together the pieces of the jigsaw…meanwhile the lives of the two kidnap victims hang in the balance and you run a gauntlet of emotions as you read this book. Throw in some gangland connections and Nick’s student, Josh, being placed in mortal danger and your heart will be pounding as you work your way through it!

I loved Nick and Kate together and they fascinated me – have they? Will they? Should they? I certainly wanted them to – there is a real connection between the two of them (yet another reason to read the other books!) The Truth Will Out, isn’t all happy endings for all the characters, there are deaths along they way – but hey I’m not telling who – read the book and find out! Despite only meeting characters in this book, I still felt my heartstrings being tugged at here!

The plotlines took us from Aberdeen to Manchester to Essex to Paris – wow I certainly felt that I was travelling along with the characters, great place descriptions led to a real sense of place for the reader.

I thought that this was a fast-moving book, with a good solid plot underlying the book and it certainly had my heart racing as I read. That last part of the book though – OMG my heart was seriously in my mouth – I kept reading at the pace of my heartbeat and had to go back a few times to re-read. There were lots of twists and turns throughout the book that keep you guessing throughout. A real compelling read all round!

I’d recommend this book – I did read it without reading the first two in the series and it worked for me – but I think to get a real feel for the characters, Nick’s past and the relationship between him and Kate then it would be best to read the first two – which I am off to do very shortly!

Thanks to Netgalley and Little Brown for the ARC in return for an honest review. 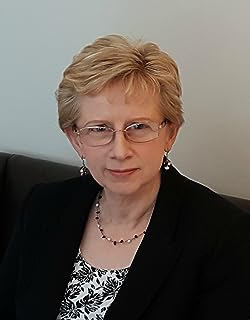 A.D. Garrett is the pseudonym for prize-winning novelist Margaret Murphy, working in consultation with policing and forensics expert, Helen Pepper.

Margaret Murphy has written 9 internationally published psychological thrillers – both stand-alone and police series. She is Writing Fellow and Reading Round Lector for the Royal Literary Fund, past Chair of the Crime Writers Association (CWA), and founder of Murder Squad. A CWA Short Story Dagger winner, she has been shortlisted for the First Blood critics’ award for crime fiction as well as the CWA Dagger in the Library. Her lifelong passion for science is reflected in her painstaking research for her novels.

In 2013, writing as A.D. Garrett, Margaret began a new forensic series, featuring Professor Nick Fennimore and DCI Kate Simms. Everyone Lies, which Ann Cleeves rated ‘thriller writing at its best’, was a bestseller, and Believe No One, was described by Publishers’ Weekly as a ‘stellar thriller’. Truth Will Out, the third in the series, is due for publication November 2016.

Helen Pepper is a Senior Lecturer in Policing at Teesside University. She has been an analyst, Forensic Scientist, Scene of Crime Officer, CSI, and Crime Scene Manager. As a Crime Scene Investigator, she examined over 3000 crime scenes, ranging from thefts and fires to rapes and murders. Later, as Crime Scene Manager for Durham Police, she supervised CSIs in over 50 major incidents. An author in her own right, Helen has co-authored, as well as contributed to, professional policing texts. Her expertise is in great demand with crime writers: she has been a judge for the CWA’s Non-Fiction Dagger award since 2010, and is Forensic Consultant on both the Vera and Shetland TV series.

To buy Truth Will Out and to visit AD Garrett’s author page then hop on over to Amazon and get clicking!

Truth Will Out – AD Garrett

One thought on “Truth Will Out – AD Garrett”