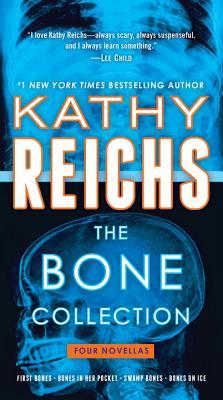 I was delighted when Penguin Random House contacted me to take part in the forthcoming #BlogTour for Kathy Reich’s “The Bone Collection”. I have never read any of the books before and hadn’t even seen the TV series, Bones, based on the books. So I approached the challenge with relish!

From the #1 New York Times bestselling author behind the hit Fox series Bones comes a collection of pulse-pounding stories featuring forensic anthropologist Temperance Brennan—including an all-new story that tells how she got her start!

“Bones in her Pocket” Dr. Tempe Brennan has seen it all. Human bones. Animal bones. Old bones. Young bones. Male bones. Female bones. What she hasn’t seen is all of them mixed together in the same case.
Until now.
The foothills of North Carolina aren’t the only unfamiliar territory Tempe faces as she races to learn the meaning of the Bones in Her Pocket.

“Swamp Bones”  a trip to Florida is supposed to be about rest and relaxation, there’s no such thing as a day off for Dr. Temperance Brennan. She has come to visit her friend, a dedicated ornithologist who’s researching the threat that intrusive Burmese pythons pose to indigenous bird species in the Everglades. While sorting through the stomach of an eighteen-foot specimen, they make a disturbing discovery: bones that are unmistakably human. And when Tempe spots the telltale signs of murder by a very different kind of predator, she’s drawn into a case with its roots in the darkest depths of the swamp.

“Bones on Ice” It is called the “death zone”: the point on Everest, nearly five miles high, above which a climber cannot be rescued. More than 250 souls have lost their lives there. Most of the bodies remain, abandoned, frozen in place. When an earthquake leads to a miraculous recovery, Dr. Temperance Brennan is hired to identify the frozen mummified human corpse. The victim is the daughter of a wealthy Charlotte couple who never got the chance to say goodbye. But far from offering solace and closure, Tempe’s findings only provoke more questions. What happened on Mount Everest? Was the young woman’s death an accident? Why aren’t the other climbers talking? And how far will those hiding the truth go to make sure the past stays buried?

“First Bones” In First Bones, a prequel to Reichs’s very first novel, Deja Dead, she at last reveals the tale of how Tempe became a forensic anthropologist. In this never-before-published story, Tempe recalls the case that lured her from a promising career in academia into the grim but addictive world of criminal investigation. (It all began with a visit from a pair of detectives—and a John Doe recovered from an arson scene in a trailer.)

Bone Collection is  a collection of 4 short stories none of which was over 110 pages long, so it was a relatively easy introduction for a Temperance Brennan novice. Out of the 4 novellas, Bones on Ice was undoubtedly my favourite and I wished that First Bones had been at the beginning of the collection as it would have helped set some scenes for me.

Each of the novellas was set in a different location which laid the background; the plots were all indicative of the level of detail and work that goes into an investigation to bring perpetrators to justice. All the books have a high level of attention to detail and scientific fact, so much so that at times I felt that I should be researching as I read (I did struggle with some of the terminology  and abbreviations used at times). I certainly learned a lot reading this collection!

Given the short length of each book they were all jam-packed and fast paced and certainly gave pause for thought. I was amazed at how much information could be picked up from the study of bones, seriously surprised! I struggled to warm to Temperance, I found her manner quite blunt and sometimes I felt she was rattling out her statements with the warmth of a machine gun – however, having talked to a colleague who loves the Bones TV series tells me this is her manner so it makes perfect sense now. I did, however, admire her tenacity, attention to detail and desire to gain justice for the victims and bring closure to the relatives. Her relationships with others also fascinate me from keeping a brittle and hard edge to at times showing a vulnerability she strives so hard to conceal.

My favourite of the novella’s however, was “Bones on Ice” – this I have to admit fascinated me and I was surprised as extreme sports, thrill seekers and mountaineering do not interest me in the slightest – but it was the realism about conditions on Everest and the references to factual information that pulled me into this one – I was compelled to google “death zone on Everest” after I finished this story – wow just wow! To think of all those corpse landmarks existing out there sends shivers down my spine and the Sherpa Guides and conditions and risks to life they put up with,extremely  emotional. I would actually have loved this novella to be longer! I felt quite cheated when it finished but what a fabulous plot!

I have to say, in the fairness of giving an honest and unbiased review, I have actually found this one of the most difficult books to review. After reading the novellas my first thought was that I wouldn’t rush out and read a full length Temperance Brennan book right now  – not because I think they are poorly written or uninteresting – they are extremely well written, researched and quite fascinating subject matter – but for me the level of scientific detail was too much and detracted from my engagement with the book – however that is a personal view and obviously Kathy has a huge fan base out there; these books will appeal to not only existing fans but also fans of thrillers where attention to detail and factual matter is important to them; they are fast paced, fascinating and definitely an educational and thrilling read. So from my first thought of “not for me” I slept on my thoughts for a while and had a bit of a reflective period and you know what, I think I might be tempted to try some more!

To buy Bone Collection hop on over to Amazon and get clicking!

2 thoughts on “Kathy Reichs – “All the Bones” #BlogTour”