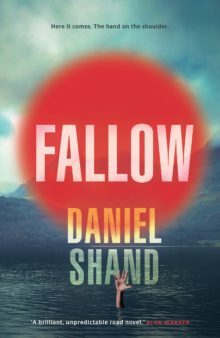 I was delighted when Sandstone Press contacted me earlier this year to ask if I would be interested in reviewing Fallow by Daniel Shand as part of a forthcoming blog tour; I had a wee look at the blurb that they sent over and I was intrigued, actually I was more than intrigued – I couldn’t resist it!

Fallow is a tense, thrilling literary novel combining elements of dark comedy and surrealism. At its heart is the relationship between two brothers bound by a terrible crime. Paul and Mikey are on the run, apparently from the press surrounding their house after Mikey’s release from prison. His crime, child murder, committed when he was a boy. As they travel, moving from one disturbing scenario to the next, they encounter a group of dishonest archaeologists, an unhinged born-again Christian, two American tourists researching their genealogy, the inhabitants of a peace camp and a religious cult headed by the powerful Brother Terry. Gradually, the brothers’ relationship begins to change and we realise there is more to their history than Paul has allowed us to know.

I have a real sense of not being truly qualified to review this book; it was a strange but utterly compelling book to read and I feel that it is deserving of a more literary critique than I can provide. However, I will do my very best to do the book justice.

Fallow follows the journey of two brothers on the run; Michael is just out of prison for the murder of a child and his brother Paul convinces him they need to go on the run for his own safety; the book follows them on a bizarre trail across Scotland

Although Micheal was just out of prison for committing a heinous crime, I actually felt sorry for him throughout the book; he is a weak and vulnerable character at the mercy of his older brother who has taken him on the run to protect him from press interest; Paul – the older brother has a real hidden darkness which is ably demonstrated through the acts he commits throughout the book; he is cruel to all he encounters and his relationship with his brother is clearly based on dominance and manipulation. Their mother is a peripheral character yet her limited input into the storyline is evidence of the level of power that Paul holds in the family unit. It is not until they come across  Isaac a member of a bizarre religious cult that Paul begins to unravel and his journey to self-destruction is easily the most “out of the zone” part of the book; you have to just lose yourself to it and go with the flow.

As well as manipulation the themes of vigilantism, abuse and cults are explored in the book all with an underlying theme of the balance of power within dysfunctional relationships

I’m not sure that I would describe this book as an “enjoyable” read but it is certainly a compelling read. As a reader, I felt like a voyeur, gazing at the troubled relationship and journey of Paul and Michael. I almost had a sense that while reading it – I was watching it play out scene by scene in front of my eyes; I got a sense of Irvine Welsh (without as much swearing) in terms of a real “avant-garde” overview – I could actually see and hear Ewan McGregor play the role of Paul. At times I felt as though I was in some psychedelic drug induced Alice in Wonderland experience – a dark, dark read. At some points I thought “this is ridiculous” and stretching credibility a little too far – but the more I read, the more the book “made sense”. It’s not a crime procedural nor would I describe it as a thriller – it is more a dark almost comical, surreal and most definitely disturbing journey into some kind of personal hell for both brothers.

Daniel Shand was born in Kirkcaldy in 1989 and currently lives in Edinburgh, where he is a PhD candidate at the University of Edinburgh and a Scottish literature tutor.

To buy Fallow then pop over to Amazon and get clicking!