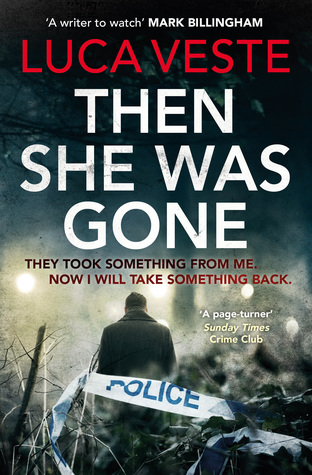 Tim Johnson took his baby daughter out for a walk and she never made it home. Johnson claims he was assaulted and the girl was snatched. The police see a different crime, with Johnson their only suspect.

A year later, Sam Bryne is on course to be elected as one of the youngest MPs in Westminster. He’s tipped for the very top … until he vanishes.

Detectives Murphy and Rossi are tasked with discovering what has happened to the popular politician – and in doing so, they unearth a trail that stretches into the past, and crimes that someone is hell-bent on avenging.

This is the 4th in the Murphy and Rossi series and can I just say that Luca Veste has absolutely surpassed himself with this one! It took me less than 24 hours to read this book and if I hadn’t had to sleep or buy food for my kids then I swear I would have read it and not once put it down!

From page one the plot will draw you in hook line and sinker, a child is kidnapped from her father but investigation by police shows something very different to have happened. The reader is then batted around relentlessly  like a pinball between past and present in what has got to be one of the most intriguing and enticing plot lines ever! I don’t want to say too much and give the game away – suffice to say – read it, you will not be disappointed!

Murphy and Rossi are like tea and toast, like salt and pepper and needles and pins – they just go together, they gel and they work well, they are just meant to be. They are characters that the reader will connect and engage with and each book in the series sees them develop that little bit more. We see Murphy a bit more chilled in this book and Rossi is a bit more angsty but it soon becomes clear what lies behind her unease.

What I love about Luca Veste’s books, is the Liverpudlian dark humour, it’s very much like Glasgow humour and it fits in well with his writing. It provides a gritty realism to a novel which covers rape and sexual abuse from an elitist group. I found this element of the story morbidly fascinating as it is clearly founded on a reality that exists in the “old boys” network from Oxford – think the Bullingdon club and its notorious reputation and views about women and you will get where I’m coming from.

This series goes from strength to strength and there is no doubt that once you pick this book up you will not be able to put it down! Police procedural combined with psychological thriller it kept me guessing right up until the very end, I thought I’d worked things out a couple of times but wham Luca just throws you right off track again with a few curveballs! Read this book, you will not be disappointed!

To buy the book head over to Amazon and get clicking!

Then She Was Gone – Luca Veste

One thought on “Then She Was Gone – Luca Veste”