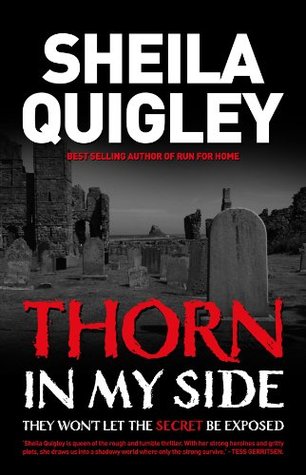 DI Mike Yorke is coming home. After three months in London, he’s looking forward to being back in the north east – but he’s barely off the train before he’s deep into the most bizarre case of his career.

A viciously flogged corpse. Children disappearing, the length of the A1. Horrific new street drugs. And buried somewhere is a deadly secret that will lead him down paths so dangerous, he will question the very fabric of society.

In the first in a stunning new series set on Holy Island, an explosive secret going back to the dawn of time is unearthed by a young woman who, fearing for her life, goes on the run in the wilds of Northumbria. The fate of the world is in the hands of DI Mike Yorke, and abused clairvoyant street kid called ‘Smiler’, and Mike’s elderly Aunt May. Everyone from the lowlifes of the London streets to the monks near Holy Island become involved in a race against time to save humanity.

A huge fan of the #Seahills series by Sheila Quigley I cannot quite believe that I missed out on this trilogy based on the Holy Island of Lindisfarne in Northumberland – a place I visited many times as a child and fascinated by the crossing times that would leave you stranded on the island if you miscalculated and my wish to see monks in brown robes line the street (neither of which ever happened!) So when I recently met the lovely Sheila Quigley at #CarlisleNoirAtTheBar and got talking to her then I knew that this had to be added to my TBR pile!

While the story is narrated mainly by Mike Yorke, who is returning home to Northumberland  from London, for me the main character has to be Smiler – talk about unleashing my mothering instinct – his character made me just want to reach into the pages and bring him home with me!  Smiler has been used and abused since childhood and is found near death on the doorstep of Mike Yorke’s temporary London home – he gets under Mike’s skin and if you read the book you will understand why – what an endearing and engaging character that Sheila has created here and I am looking forward to finding out more about him in the rest of the series.

The main plot did seem a little far-fetched, if I’m honest (although the conspiracy theorist part of me thought hmmmmmm well is it far fetched? I’m a firm believer a lot goes on in the establishment that we are unaware of) However as I am an avid FICTION fan then I don’t have an issues with reality being stretched in the name of a good book – if the characters engage me then I can deal with a bit of imagination stretching.

Thorn In My Side gives you murder, child trafficking, abuse, addiction and conspiracy theory but it is served up with a healthy Northeastern humour which lessens the blow to those who prefer something a bit milder!

Lets just say that I will never visit the Holy Island again without this book coming back to me! I’m looking forward to reading the next two in the series

To buy the book you can pop on over to Amazon and get clicking!

Thorn in My Side – Sheila Quigley