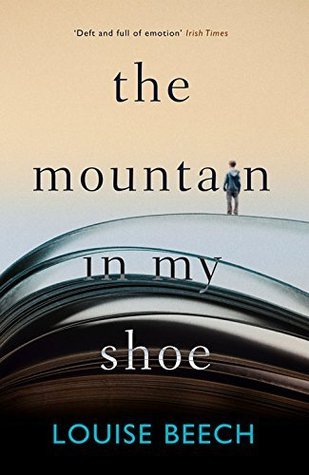 A missing boy. A missing book. A missing husband. A woman who must find them all to find herself. On the night Bernadette finally has the courage to tell her domineering husband that she’s leaving, he doesn’t come home. Neither does Conor, the little boy she’s befriended for the past five years. Also missing is his lifebook, the only thing that holds the answers. With the help of Conor’s foster mum, Bernadette must face her own past, her husband’s secrets and a future she never dared imagine in order to find them all. Exquisitely written and deeply touching, The Mountain in My Shoe is both a gripping psychological thriller and a powerful and emotive examination of the meaning of family … and just how far we’re willing to go for the people we love.

My Review: 5/5 – that is 5 stonking great big massive stars!

This book has actually been sitting on my #TBR pile for a while now after Karen Sullivan of Orenda Books kindly gave me a copy when I met her in Glasgow last year. I also purchased a kindle copy of the book for myself as well and I am just stunned that it has taken me so long to read this! Why would you wait so long? I hear you ask – well those who know me know that I like my crime thrillers and am a lifelong fan of a little bit of murder and mayhem mixed up with some bad boy detectives; Mountain in My Shoe seemed a little gentler than my usual read so it took me a little longer to join this particular party! But you know what,  everybody needs to step outside of their comfort zone every now and then because there are so many great surprises waiting out there to greet you!

It took my some time to gather my thoughts for this review, I wasn’t entirely sure that I could do justice to what really has to be one of the most exquisitely, emotional and intense books I have ever read.

The Mountain in My Shoe doesn’t take you on a breakneck journey through the lives of the characters and the plot, rather it is a measured, moving and intriguing voyage through ten-year old Connor’s life and the connections that are made and lost as he is  trailed through the care system.

Bernadette is devastated to hear that Connor has gone missing, he is the little boy she has been befriending for years; the same night Bernadette had planned to leave Richard, her controlling husband but he is late home – something that never happens in their lives. Torn between staying and ending the relationship and finding out what happened to Connor, Bernadette makes the decision to go to Connor’s foster home and deal with Richard later. What follows is the one of the most powerful and emotive stories I have read in a long time.

The story is told by three narrators – the book (LifeBook that each Looked After and Accommodated Child has follow them through their lives allowing memories to be stored and built up for when they become adults); Bernadette and Connor. Reading the chapters told by “The Book” had me in bits – there were snippets of Connor’s life as told by the various foster families and professionals involved in his very short life; these chapters were starkly realistic from the informal notes from those who were closest to him to the more formal social work case reporting documents – each opening up each sad and tragic chapter of Connor’s life.

Louise Beech has a real talent for bringing her characters to life, I could almost sense Connor sitting next to me, largely mistrusting due to his fear of rejection and loss, the wall he built himself to offer protection and his very clear and desperate need to be accepted and wanted – I defy you to read this book and not want to sweep him up in your arms and look after him.

Bernadette’s fragility was at the forefront of the book and her fear of being on her own was almost tangible throughout the pages – yet underneath this there was a strength of character that I don’t think she really recognised until the very end; I loved Bernadette and her stoic determination and how she dealt with things as her whole world started to unravel around her.

Although the book is narrated by these three, through Louise’s skills the other characters and place are brought uncannily to life – I would shiver with fear at Forest Pines where Bernadette lived isolated and behind the trees – the haunted house she called it; Anne and the taxi driver – the closest friends that Bernadette had radiated a warmth that you wanted her to take advantage of while she dealt with her controlling yet also damaged husband Richard; Frances – Connor’s real mother – there was a sense of feeling we should be “booing” her as the “baddy” in the book – but I could not fail to be drawn to her and moved by her very real plight throughout – despite what it had resulted in for her kids. There is certainly a rich and emotive tapestry weaved throughout this book and I think a story could be written about each and every one of the characters within it.

The Mountain in My Shoe explored contemporary themes  in relation to society and the care system that processes kids through it like some “care” production line – yes they implement systems and procedures to try build a life for these kids but the damage that must be done by having over 10 foster placements before you even hit double figures! It covers the dynamics of dysfunctional families and the ripple effect of our past into our present.

If you ask me how did this book make me feel – I’d say it made me emotional, it made me cry and laugh and draw my breath in wonder at the resilience of the human nature and the inner strength that carries people through the most vilest circumstances. It made me angry at a system that doesn’t always care; it gave me hope that with the right support even those we consider the most damaged can always find a way back up again. This book is going to be with me a long time coming!

To buy the book then head on over to Amazon and get clicking!

7 thoughts on “The Mountain In My Shoe – Louise Beech”