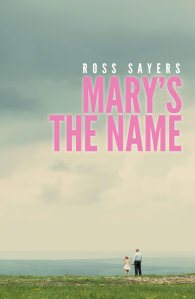 I happened across an ad for this book while scrolling through Twitter one night and the blurb immediately enticed me. Something about it just drew me right in, perhaps it was the reference to #WittyScotsBanter that grabbed me or the bond between Mary and her granpa but I knew that I had to read it! So a huge thank you to Ross Sayers and Cranachan Books (what a superb Scottish name for a publisher!) for the ARC, which I volunteered to read and to provide my honest review.

Ross has also kindly written a short guest post about the character of Mary:

Do you ever find yourself having a really childish thought, or not knowing a basic fact and having to Google it to avoid embarrassment? Well, I do. Fortunately, I was able to take all these silly thoughts and put them into a character.

After I read James Kelman’s Kieron Smith, Boy a couple of years ago, I wrote a LOT of stories as a child narrator. Always boys though. Then I decided to challenge myself and write from a female POV instead. Shortly after, I decided a little girl’s relationship with her grandfather would be a great basis for a novel. This would allow me to show how a wee girl would be influenced if she only had her Granpa to learn from, as well as what she would teach her Granpa. Enter Mary Sutherland.

Mary is 8, and clever for her age. She likes James Bond, Elvis Presley, and playing the keyboard. She has a hard time making friends at school, which only makes her closer to her Granpa, Arthur. She’s never been on holiday before, but that’s about to change!

Because of her close relationship with her Granpa, I wanted to give her some interests most girls her age wouldn’t necessarily be ‘into’. Her and her Granpa spend many nights dancing to Elvis, or watching Bond films. I was keen not to make her an out-and-out ‘tomboy’ though. Just because she likes Bond doesn’t mean she doesn’t want to watch Frozen! (She had to wait for the DVD, Granpa wouldn’t go to the pictures to see it…).

Mary also has a lot of thoughts on everyday occurrences that grown-ups don’t seem to notice. Why is it brunette and not brownette? And why was Pierce Brosnan only allowed to be in a few Bond films? He was the best one!

Mary learns a lot about friendship, family, and loyalty in the book. She sees people at their best and worst, and realises that nobody’s perfect.

I really hope readers like Mary, and I can’t wait for everyone to meet her!

“When me and Granpa watched James Bond films, he told me not to be scared because people didn’t have guns like that in Scotland. That must’ve been why the robbers used hammers.”

Orphaned Mary lives with her granpa, but after he is mixed up in a robbery at the bookies where he works, they flee to the Isle of Skye. Gradually, Mary realises that her granpa is involved. And the robbers are coming after him–and their money.

Mary’s quirky outlook on life, loss, and her love of all things Elvis, will capture your heart. Full of witty Scots banter, Mary’s the Name will have you reaching for the hankies, first with laughter, then with tears.

Heart-warming and heart-breaking, this darkly comic debut is from a fresh voice set to become Scotland’s answer to Roddy Doyle.

Although a crime is the foundation that #marysthename is built upon, it isn’t really #crimefiction in a traditional sense and it is a slight deviation from my normal choice of genre. However there is something completely and utterly captivating about this book that just draws you in and churns you up inside out!

Eight year old Mary and her granpa are caught up in a robbery in the bookies where he works. Not long after Mary’s granpa tells her they are going on a summer long holiday to the Isle of Skye. She is excited by the adventure and not that sad to leave her Stirling home for the summer as she feels quite isolated and friendless there. However Mary soon begins to realise that her granpa wasn’t being entirely truthful with her at all.

This isn’t a “wham bam thank you mam” paced read but rather a gentle yet fiercely emotionally read. The narrator is 8-year-old Mary and I immediately connected with her, whenever I picked up the book to read I was transported into the inside of Mary’s head. Despite her young years she is a wise wee girl and her dialogue is intelligent beyond her years. There is a charm, an innocence, vulnerability as well as a matureness about Mary that makes her a strong and well-developed character. I think that shows a tremendous skill from the author to form such a well-rounded character from one so young. Mary will have you going from howling with laughter to howling with tears as you read this book.

Initially I completely got granpa and the reasons for his actions – his wee Mary is his whole world and this shines through throughout the book but when they moved to Skye I saw a different side of him that I wasn’t so keen on. Despite everything Mary continued to be his protector yet he continued to tell her lies but by the end I got his reasons all over again but was left weeping throughout this story.

Mainly set on the Isle of Skye although it starts off in their hometown of Stirling; the dialogue in the book is local but don’t let this put you off – it is not such that you need to be Scottish to understand but it gives you a real sense of authenticity – my internal voice delighted in reading this book in the dialect that just works so well for it.I’ve never been to Skye before but the author managed to pick me up and transport me there with his description – I could see the big Pink House of Mary’s dreams and could imagine Granpa having his wee dram of an evening while telling Mary a merry tale or two!

Honestly this book had my emotions churned up and spat out right from the very beginning; I laughed and cried throughout the book, my heart was warmed and it was broken – this book chewed me up and spat me out. And being Scottish and also having such a close relationship with my own grandparents I could honestly describe this book as opening the pages and crawling up onto my granda’s knee as I relived so many happy memories.

Mary’s the Name is a quirky yet powerfully evocative tale that will both warm and break your heart simultaneously – go grab yourself a wee corner to read in and settle yourself down, you are going to love it!

To buy the book head over to Amazon and get clicking!

Ross studied English in his hometown of Stirling. Not content with the one graduation, he completed a Masters in Creative Writing the following year. His stories and poems have featured in magazines such as Octavius and Quotidian. Ross also tried his hand at acting in the university’s Drama Society, which gave him valuable life experience at being an extra with no lines.

One of his short stories, Dancin’, was used on West College Scotland’s Higher English course. He only found out after a student tweeted him requesting a copy of the story so she could finish her essay.

Ross mainly reads contemporary and literary fiction, and loves it when a writer remembers to include an interesting plot. He heartily endorses not finishing books which bore you.

While researching Mary’s the Name in Portree, gift shop employees excitedly mistook him for Daniel Radcliffe; Ross had to burst their bubble. But at a football match in London, he agreed to have his photo taken with a wee boy, who believed he was Harry Potter, to save any tears or tantrums.