#SpicerIsBack is the #hashtag that has been chosen to go alongside the 8th book in the Jon Spicer series and it kind of grabbed me when I was asked to take part in this #BlogTour! OK first of all – CONFESSION time – I’ve never read ANY of this series before so I was going in completely blind – no preconceptions – no back story and no ideas! Some might think that’s a bit controversial, picking up a book that far down the line? But I don’t – while I do like to follow a character through from their conception and read as they grow and develop – every now and then I like to throw myself a wee curve ball and just dive right in there…and if I like it then I’ll go back and start at the beginning and if I don’t – well it is a new experience and at least I have tried a new author/series! 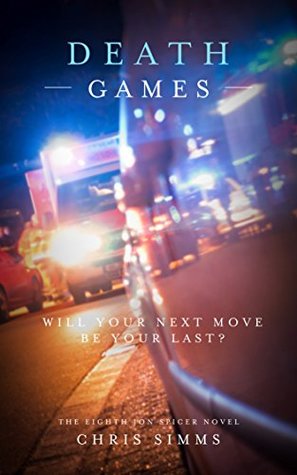 Manchester: an injured survivor from a motorway pile-up flees the scene, leaving behind evidence that a terror attack is being planned…

Jon Spicer, newly trained as a Specialist Firearms Officer, has joined Manchester police’s Counter Terrorism Unit. Thrown out of his previous department and demoted to Detective Constable, he is being kept in the force only because he’ll take on the most dangerous of jobs.

Iona Khan is struggling to find respect and recognition in the male-dominated Counter Terrorism Unit. Her mind might be sharp, but many of her colleagues value physical strength above anything else.

As the investigation quickly snowballs, Spicer and Khan are thrown together. The two officers must learn to trust each other – and fast. Because in this chase, any wrong move could be your last.

Death Games is an action packed thriller that sees DI Jon Spicer in his newly demoted role as DC in the CTU (Counter Terrorism Unit). He has a tough job ahead of him fitting into a new unit and coming to terms with his loss of status in the force. He is paired up with DC Iona Khan who is also struggling to find her place in a male dominated world and despite initial reservations the two go on to develop a mutual trust and respect for one another. We start of with an explosive motorway pile-up and the action just keeps ratcheting up and doesn’t let up its pace right to the very end.

This is obviously the 8th novel in which Spicer features and there is a huge back story to his current position of which I am unaware. Did this spoil the enjoyment or the understanding of the character for me? Not at all – I felt there was enough background information provided to make it possible to read on its own but it certainly piqued an interest for me. I am intrigued to find out more about Jon Spicer. Who is he? What makes him tick? What lies beneath the man who is not afraid of bending the rules. Death Games, however, gave me a well-rounded and multifaceted character who is clearly ahead of the game in relation to his current position in the force…guess this means I have a whole series to catch up on now!

I loved the Iona Khan’s character, short in height perhaps but not short on grit, courage or determination.She’s a feisty wee thing and has got a hard shift in a male dominated environment but there is no doubt that she has got the guts and stamina to prove herself over and over again. I think there is a real bond that could be developed between Iona and Jon and am keen to see where that goes.

Initially the reader assumes they are going to be taken on an investigation into the motorway pile up but it soon becomes apparent that there is more at stake than just a simple road crash. When one of the victims flees the scene and the dead man throws up all kinds of shady connections it is clear that a terrorist activities have to be considered

At first I was a little worried that this was going to be a high-octane, adrenaline junkie, alpha male sort of read; you know all gun-toting, high-speed chases and explosions!  Yes we did have these but amongst it all Death Games also gave me characters that intrigued me and left me wanting more; there was more than just bomb plots and explosions, there were relationships and real people, I wanted to know the why’s and not just the hows and this novel provided it. I have to say that I don’t feel caught on the backfoot by jumping in 8 books down the line, I do want to read more about Spicer and I would recommend it to those who love a bit of action with their murder! #SpicerIsBack