#OMG I’m so excited to be involved in this #TripleBill  #TagTeam #CoverReveal for the brilliant Scottish Crime Writer, Douglas Skelton’s new book #TAGYOUREDEAD

Not only is this  a #CoverReveal but it’s a #TagTeam triple bill one at that! Throughout the day myself, #Twinnie Noelle over at Crimebookjunkie and fellow Scottish Book Blogger, Gordon over at grabthisbook will be posting our cover reveals of what we reckon is going to be one of the best reads of 2017!

“Tag You’re Dead” is the 2nd in the Dominic Queste series. Have you read the first one, “The Dead Don’t Boogie”? If not then why not go read it before #TYD is released! 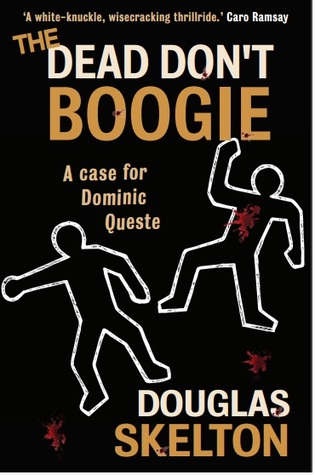 In “The Dead Don’t Boogie” we are introduced to Private Investigator, Dominic Queste, who is on the lookout for missing teenager, Jenny Deavers. “A missing teenage girl should be an easy job for Dominic Queste – after all, finding lost souls is what he does best. But sometimes it’s better if those souls stay lost. Jenny Deavers is trouble, especially for an ex-cokehead like Queste. Some truly nasty characters are very keen indeed to get to Jenny and will stop at nothing… including murder.  As the bodies pile up, Queste has to use all his street smarts both to protect Jenny and to find out just who wants her dead. The trail leads him to a vicious world of brutal gangsters, merciless hitmen, dark family secrets and an insatiable lust for power in the highest echelons of politics.”

This was one of my favourite reads of 2016! And you can read my review here The Dead Don’t Boogie – Book Review

You can buy “The Dead Don’t Boogie” by clicking here

So what’s Dominic Queste going to be up to in “Tag – You’re Dead” then?

Maverick investigator Dominic Queste is on the trail of missing butcher, Sam Price. But he soon uncovers a killer with a taste for games. What began as a simple favour for his girlfriend quickly descends into a battle for survival against an enemy who has no qualms about turning victims into prime cuts. Amidst a twisted game of cat and mouse, suspicious coppers, vicious crooks and a seemingly random burglary, Queste has to keep his wits about him. Or he might just find himself on the butcher’s block.

Well if that has whetted your appetite then why not have a wee look at the book cover….

I know you do…

I have got to say I LOVE this cover and I cannot wait for the publication date! I know you are all going to love reading this book!

Thank you to Douglas Skelton and Sara Hunt of Saraband & Contraband Publishing for the opportunity to take part in this event!

To pre order “Tag-You’re Dead” then click on the link below!