Well the queue was snaked around the Mitchell Library for this event and that’s no surprise really as two of the county’s most popular crime writers came together in conversation with Alex Gray, to talk about their novels, “None But The Dead” (Lin) and “Cold Earth” (Ann)

An atmospheric start to the event was provided through readings from each of the books, evoking the atmosphere of Scotland’s northern islands for a crowd eager to hear from the voices from behind the books – and they were not disappointed. The hour event flew by and despite having seen Lin and Ann at previous events, I’m sure I’m not the only one in the audience who could happily have stayed there into the wee small hours to listen to these talented and inspiring women talk for much longer! 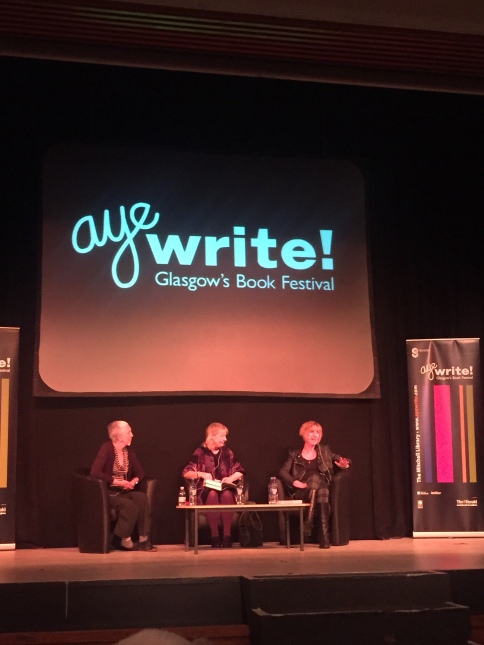 I love Lin’s story of the inspiration behind #NoneButTheDead – small muslin squares fashioned into flowers representing the souls of dead children found in a school-house in Sanday, Orkney – you just know that this book is going to provide you with a dark and atmospheric island tale (and you won’t be wrong – trust me – I’ve read it and it’s fab!)

Ann told us that Jimmy Perez’s character was created for what was originally a one-off novel, Raven Black, which wanted to explore how people assimilate into communities – Jimmy is of Spanish origin (which is not beyond the realms of possibility given that a ship from the Spanish Armada was shipwrecked off the coast of the Fair Isle, Shetland in Sept 1588).

Both Lin and Ann write from experience of living on the Islands; Lin spent time teaching in Orkney, where she lived with her husband John in a caravan on a farm – when the winds got really bad, the farmer would take them into the farmhouse for shelter! While Ann dropped out of university in London and ended up as an assistant cook in a bird observatory in Shetland, despite knowing nothing about birds, nor being able to cook!

They both describe themselves as writing as “readers” – they start with a scene in their heads and the story grows from there – they have no idea where the characters are going or how the story ends!

I think Ann devastated the audience a little when she told us her next Shetland novel will be her last, there was a collective #Aww from the audience! She did point out when she told Ian Rankin of this his response was “Good Luck with that!” Thankfully Lin reassured us that she has no plans as yet to finish Rhona MacLeod off, for which I am very grateful!

A superb event and if you haven’t seen Ann or Lin at an event before then I can highly recommend grabbing a ticket the next time they come along! And of course the books – buy the books – I’m a massive fan of both the Shetland series and the Rhona MacLeod series and would urge you to buy them and try for yourselves – superb sense of place, strong characters and dark, atmospheric plots await you!

Aye Write continues until the 19th of March and you can find out what the rest of the festival holds by clicking the link below! Go on, what are you waiting for!

2 thoughts on “#AyeWrite: Lin Anderson & Ann Cleeves – The Darkness of Orkney and Shetland”