As #AyeWrite draws to a close this weekend I was delighted to be attending #TheDearGrittyPlace featuring three outstanding crime writers whose books are based in the best wee city in the world – aye, that’ll be Glasgow then! We had Alex Gray, award-winning crime writer talking about her latest novel, Still Dark; Douglas Skelton, shortlisted for the inaugural  McIlvanney Prize for Crime Book of the Year in 2016, talking about Tag You’re Dead and Les Wood, prize-winning short story writer and poet talking about his debut novel, Dark Side of the Moon. Such an outstanding panel deserved an outstanding chair and the evening’s event was expertly facilitated by the brilliant Michael J Malone who put them through their paces before throwing them to the audience!

All three talked about their reasons for basing their novels in Glasgow and other than it is clearly the best city in the world to write about, they all recognise the dark, gritty yet colourful and passionate city as being one of the best places to write about crime! Our city lends itself well to this genre, with the shady criminal underbelly existing alongside some of the most warmhearted, humorous and fiery characters out there…gritty just goes with Glasgow crime fiction like, oh I don’t know, Francie and Josie!

And of course we had the readings from each of our authors, with a collective gasp at Alex Gray’s opening chapter of Still Dark….I’ve only read the first 4 in the Lorimer series but I’m telling you, listening to that has me champing at the bit to play catch up! Douglas gave us a glimpse into the life of Dominic Queste and his relationship with Father Verne and the Sutherland brothers – and a wee shoofty into just how our dark gallows humour winds its way into his writing! I’ve read it and I can guarantee you that it is an outstanding read! But kudos goes to Les Woods who broke into song during the reading of his book, Dark Side of the Moon. It sounds like a brilliant read…a Glasgow heist orchestrated by some of Glasgow’s finest villains – no actually scrap that – a bunch of neds who couldnae run a menage have decided to steal a famous diamond worth million…described as “No Mean City meets The Italian Job”in a hilarious comic noir debut – one to watch out for I’d say!

Michael gallantly tried to engage the panel in some serious and soul-searching discussion, which Alex contributed to – Douglas was clearly possessed by Dominic Queste at this point with his one liners while Les told us he didn’t go in for all that “high falutin” stuff; a fascinating insight into how much of each authors character contains elements of their own personality! All kidding aside, despite the gallows humour and the Glasgow grit, each of the novels do touch upon some serious social commentary from the increase in cases of filicide, the country’s addiction epidemic and the growing number of vulnerable and homeless people existing in an invisible underclass in our streets and cities across the country.

All in all an excellent panel, Glasgow is fondly known as the Dear Green Place, it also is a crime fiction lovers Dear Gritty Place – it is a city of many faces, some of them dark, some of them beautiful – its brutal, tense, yet sassy at the same time – as Alex Gray said last night “It’s MY Glasgow” 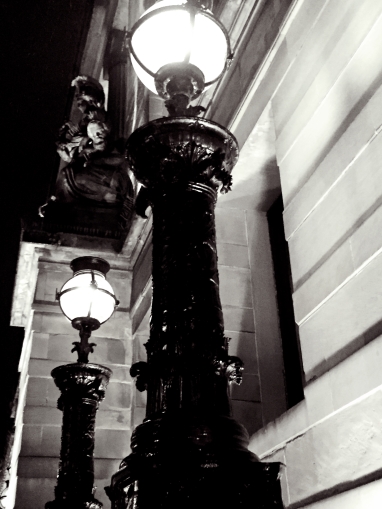 To buy the books from any of the authors features, get yourself over to Amazon or another decent bookstore and get clicking!

Les Wood, Dark Side of the Moon

For your very last chance to visit the festival for closing day tomorrow then see below! If you have missed Aye Write this year (then you must be crazy!!!) be sure to get it in your diary for next year! It is a wee jewel in Glasgow’s crown this one!