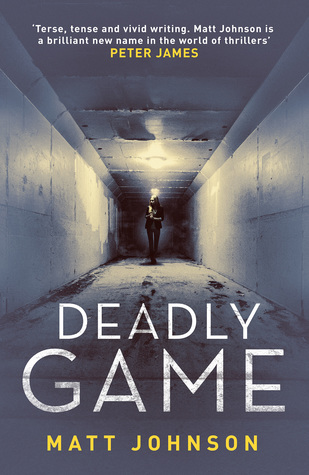 I am delighted to be hosting today’s spot on the #BlogTour for Matt Johnson’s #DeadlyGame, the 2nd in the Robert Finlay series and another exhilarating read from #OrendaBooks.  You know, sometimes I think that Karen Sullivan from Orenda knows my reading mind better than I do! I’m not so much a fan of action reads but every so often one or two appear on my radar and they just zap me! #DeadlyGame is one of these!

Reeling from the attempts on his life and that of his family, Police Inspector Robert Finlay returns to work to discover that any hope of a peaceful existence has been dashed. Assigned to investigate the Eastern European sex-slave industry just as a key witness is murdered. Finlay, along with his new partner Nina Brasov, finds himself facing a ruthless criminal gang, determined to keep control of the traffic of people into the UK. On the home front, Finlay’s efforts to protect his wife and child may have been in vain, as an MI5 protection officer uncovers a covert secret service operation that threatens them all… Picking up where the bestselling Wicked Game left off, Deadly Game sees Matt Johnson’s damaged hero fighting on two fronts. Aided by new allies, he must not only protect his family but save a colleague from an unseen enemy … and a shocking fate.

Deadly Game is going to drag you screaming and kicking right into a multi-layered, fast-moving and a terrifying plot that will have all your senses on high alert right the way through to the last page! I read the last few chapters that fast that I had to read them all over again, such was I caught up in the pace of the book. The book picks up from the end of Wicked Game (the first in the Robert Finlay series) with Robert and his family in a safe house following attempts on his life which left some of his SAS colleagues murdered. I hadn’t read Wicked Games prior to this but there was enough information provided that made it possible to read this as a standalone. Having read Matt’s bio, his personal knowledge and understanding shine through in this book and work to place the reader smack bang in the middle of the plot no matter where in the world we are with Finlay as we read. This is not a high-octane espionage thriller but political subterfuge is high on the agenda and if you are anything like me then your levels of paranoia are going to be through the roof by the end of this!

Despite having no prior knowledge of Finlay, I immediately warmed to him; despite his career he appears to have a level of sensitivity and dignity that can sometimes be missing in similar characters; as a reader I could feel the world on his shoulders and the impact of PTSD and the danger his family and friends were under had on him. I got the feeling he felt a bit like a fish out of water in his new posting and that there was an internal struggle going on between his desire to ensure the safety of his family against his passion for his life in active service. While his wife, Jenny, did not play a major part in the book, I warmed to her immediately and her influence on Finlay is very real and strong.

Deadly Game explores the topical and horrific subject of human trafficking and sadly the plot reflects what is happening more and more across the world. Despite the harrowing nature of the topic, it is approached with a sense of realism as opposed to sensationalism and this is to be applauded. Again it is clear that Matt is writing this book with a sense of authority and although I know it is a work of fiction, at times, I read it thinking that it could, in fact, be a true story that I was reading.

I did find myself getting tangled up in knots at times with the M15/16 secret service narrative, but that was more about my lack of knowledge in this subject matter and that the terminology was unfamiliar to me. Despite this, it still had me hooked! I didn’t know who to trust!

Well, even though I hadn’t read the first book, Wicked Game, Deadly Game had me hooked from the start – with short action packed chapters (ideal if you are one of those people who cannot put a book down halfway through a chapter) the twists and turns throughout are going to have you spinning; the sense of realism and reality was spot on – I really did think I was an observer in a real life case! The human element of the book appealed to me the most – Finlay’s reaction to events as opposed to gun-toting action; the horrific nature of human trafficking and the ripple effect of PTSD were all true to life and are what attracted me to this book. My head was spinning by the end of it and my paranoia levels are sky-high! This book is going to rock your socks; blow your mind and have you reeling!

Matt Johnson served as a soldier and Metropolitan Police officer for twenty-five years.

Blown off his feet at the London Baltic Exchange bombing in 1992, one of the first police officers on the scene of the 1982 Regent’s Park bombing, Matt was also at the Libyan People’s Bureau shooting in 1984 where he escorted his mortally wounded friend and colleague, Yvonne Fletcher, to hospital.

Hidden wounds took their toll. In 1999, Matt was discharged from the police with Post Traumatic Stress Disorder. Whilst undergoing treatment, he was encouraged by his counsellor to write about his career and his experience of murders, shootings and terrorism.

One evening, Matt sat at his computer and started to weave these notes into a work of fiction that he described as having a tremendously cathartic effect on his own condition. He has used his detailed knowledge and memory to create what has been described by many readers as a fast paced, exciting and authentic tale of modern day policing.

Matt Johnson is living proof that PTSD is a condition that can be controlled and overcome with the right help and support. He has been described by many fans as an inspiration to fellow sufferers.

A keen biker, Matt rides a ’99 Harley Davidson Fatboy and is patron to the UK based ‘Armed Forces Bikers’ charity. He is also patron to a newly-formed charity, ‘Shoeboxes for our Heroes’.

In his spare time Matt keeps honey bees and produces his own honey. He scuba dives, collects unusual hats and enjoys hill-walking with his three dogs at his home in Wales near the Brecon Beacons.

Matt is now represented by James Wills at Watson-Little Literary Agents in London. He is available for interview either through Watson Little and can be contacted by email mattjohnson57@hotmail.co.uk and through twitter @Matt_Johnson_UK .

To buy #DeadlyGame get yourself over to Amazon and click NOW!