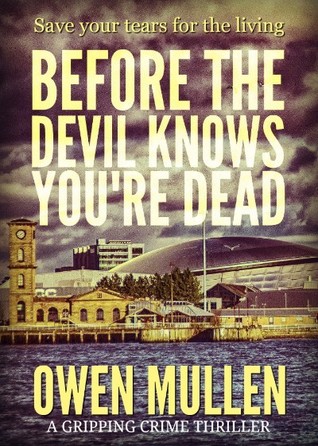 I am absolutely delighted to be hosting today’s spot on the #BlogTour for #BeforeTheDevilKnowsYoureDead by Owen Mullen – the 3rd in the Charlie Cameron series. I discovered Owen’s books just over a year ago and I am hooked on them so I was delighted for Owen when he was signed with #BloodhoundBooks late last year and even more delighted that book number three is out there! and I am positively #EEEEEEEKING about being on the 3rd #BlogTour for Owen! A top Scottish author and I’d highly recommend you read his books like NOW!

Gavin Law was a whistleblower.
Now he’s missing.
Just another case for Glasgow PI, Charlie Cameron, until he discovers there is more to Law and his disappearance than anyone imagined.
Wallace Maitland, the surgeon responsible for leaving a woman brain-damaged may have abandoned his sacred oath and become a killer. Did the hospital which refused to accept responsibility for the tragedy have Law silenced permanently? Or, with his wife little more than a vegetable, has David Cooper, believing he has been betrayed yet again, taken justice into his own hands?
Charlie comes to realise the world of medicine can be a dangerous place.
Across the city, East End gangster, Sean Rafferty is preparing to exploit the already corrupt city council in a multi-million-pound leisure development known as Riverside. The project will be good for Glasgow. But not everybody is keen to work with Rafferty.
With more than money at stake, Sean will do anything to get his way. His motto, borrowed from his old man, is simple. Never take a no from somebody who can give you a yes.
If that means murder, then so be it.
Charlie has crossed Rafferty’s path before and lived to tell the tale.
He may not be so lucky a second time.

Before the Devil Knows You’re Dead provides the reader with an enthralling, gripping and fast-paced rollercoaster of a ride through the streets of Glasgow with Charlie Cameron and his hunt for whistleblower, Gavin Law.

Charlie Cameron is a Private Investigator with his own demons to torment him and throughout this series, the reader is drawn further into his character and begins to learn more about what drives him and what makes him tick.  With no word of a lie, I think I’ve been developing a little #GirlCrush on Charlie over the 3 books; he has wormed his way into my heart with his determination and down to earth, straight talking Glaswegian grit and humour! In Before the Devil he has gone straight to my heart! The love of his life makes a brief reappearance but is Charlie as in love with her as he first thought and is there a new love interest on the horizon?!

Patrick Louge, Charlie’s sidekick, seriously this guy has me in stitches with every book, borderline alcoholic and part-time crook, it would appear that he is tolerated by Charlie but in reality, you know that Charlie couldn’t do without him. Patrick’s earthy Glaswegian dry wit is brought to the fore in Before The Devil and there are some class one liners in there that had the tears streaming down my face!

Notorious gangster, Jimmy Rafferty appeared in Old Friends and New Enemies and in this book we are given the pleasure of getting to know his son, Sean. Hmm, you thought Jimmy was bad news – well let’s just say Sean may have more of a respectable persona on the outside but inside he is more ruthless and dangerous than his father ever was. Owen has given a spot on portrayal of the gangster underworld in present day Glasgow – they are not all wee neds running around with blades and chibbing folk – today’s gangsters have a more “respectable veneer” and are often found courting business with those in positions of power.

DS Andrew Geddes, Charlie’s police link, plays a greater role in this book and it was good to be able to find out some more about what is going on with him. He is struggling with his boss who has not risen through the ranks but who is a fast-tracked entrant into Police Scotland. His desire to manage by statistics and budgets as opposed to Geddes’ need to deliver justice through the truth, sees Geddes question his role in Police Scotland and him linking up with Charlie to find the truth behind the deaths….

Corruption and the dark underworld of Glasgow gangsters are the themes explored in Before the Devil and Owen pulls no punches when narrating the tale of the lengths those in power will go to, to protect their own interests!

Characters and plot aside, one of my favourite things about Owen’s books are the sense of place that he gives the reader – he has the knack of bringing the streets of Glasgow alive for you! I know every street and every landmark in his books and I swear it is like he has picked me up and placed me slap bang in the centre of the action when I read his books! Even if you don’t know Glasgow, you will feel like you do after you read this. I can now drive or walk through the city centre and see the characters step out of the pages into the streets such is Owen’s talent for providing the reader with that sense of place.

Before The Devil Knows You’re Dead gives you a tightly knit and enthralling plot, with Glaswegian grit and gallows humour thrown in; Owen has an uncanny knack of creating solid and multi-dimensional characters that will draw you in and leave you wanting more…it will keep you engrossed until the very last page and shouting for book number four!

When he was ten, Owen Mullen won a short story competition and didn’t write anything else for almost forty years. In between he graduated from Strathclyde University with a Masters in Tourism and a degree in Marketing, moved to London and worked as a rock musician, session singer and songwriter, and had a hit record in Japan with a band he refuses to name; on occasion he still performs. He returned to Scotland to run a management consultancy and a marketing agency. He is an Arsenal supporter and a serious foodie. A gregarious recluse, he and his wife, Christine, split their time between Glasgow – where the Charlie Cameron books are set – and their villa in the Greek Islands

To buy this book then get yourself clicking – you would be crazy to miss out on this! Before the Devil Knows You’re Dead/Amazon