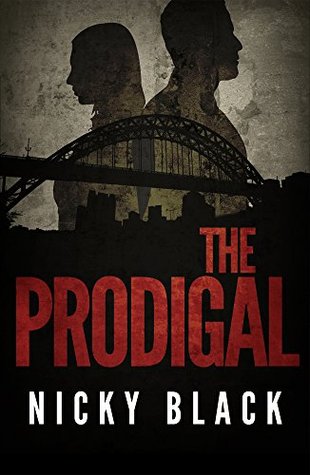 I have to confess, I have actually had The Prodigal sitting in my #ToBeRead folder since November last year and have only just read it #HangsMyHeadInShame. But anyway better late than never and yes it was well worth the wait!

Exiled from his beloved Newcastle sixteen years ago, Detective Sergeant Lee Jamieson is returning home in search of the teenage daughter he’s never met. With a good promotion under his belt and his parents gone, he’s ready to return to his roots and the warm Geordie spirit he has missed so much.

Much to his surprise, his first assignment is in Valley Park, a forgotten sink estate and home to some of the worst social deprivation in the country – the estate where he grew up, and where Nicola Kelly, the wife of a renowned local villain, calls home.

As Lee and Nicola’s lives become entwined through a series of dramatic events, they fall in love and embark on a dangerous affair that will change both of their lives forever. Nicola’s husband, Micky, has few scruples, and, as he feels her slipping away, tightens his grip on her affections.

In order for Lee and Nicola to be together, Micky Kelly has to go.

My review:
I love a good gutsy and realistic read and #TheProdigal certainly gave me that in abundance! DS Lee Jamieson has returned to his home town of Newcastle to a newly promoted post and to make contact with the daughter he has never met after being forced to leave the area 16 years ago. He is assigned to Valley Park, one of the most deprived areas in the country and where Lee grew up as a boy. His paths cross with a Nicola Kelly, wife of local hard man Mickey and despite her ingrained hatred for the police it is clear that there is a connection between them – but what cost will that connection bring?
The Prodigal takes you on a hard-hitting  journey littered with poverty, deprivation, domestic abuse, drugs and gangland warfare. There is just something so intrinsically real about reading Northern based crime novels, the cities lend themselves so well to the plots and as a reader I found myself transported to the streets of Newcastle and firmly entrenched in the lives of the characters as the story unfolded.
Lee is a man with a past firmly rooted in the community he has now been assigned to serve but he is at odds with what he sees play out in front of his eyes and the methods used by those in authority to deal with crime and social deprivation. Residents of Valley Park don’t like to play ball with the Police and he has his work cut out trying to make a difference. I got a real sense of depth from Nicky Black’s portrayal of Lee’s character, he struggles with the apathy of his colleagues, the fear of reprisals from locals who don’t want to be seen as “grasses” and his new relationship with the daughter he had never met before. He also has to contend with his guilt for abandoning her mother, Debbie and any residual feelings he had left for her – this is compounded by his growing infatuation with Nicola Kelly and the danger that any relationship with her would bring to those around them.
Nicola plays a major part in the storyline and oh how I could connect with her, I really felt like I got inside her head and faced the struggles she was experiencing as the wife of a local gangster, a member of the community that could potentially turn against her and fighting her feelings for a man who was part of a system that she hated. I watched Nicola grow from a weary and downtrodden woman who thought that she had to put up with her lot to a strong and feisty character who showed a great strength in standing up to those who set out to destroy the lives of others.
Along with other women in the novel, Nicky Black has created an army of strong, resilient and empowered women and has challenged some of the preconceptions that attach themselves to those who live in estates similar to Valley Park. #TheProdigal explores that notion of sink estates as home to an underclass who just don’t care, she raises a challenge to the stigma surrounding such estates and the lack of any real thought to the communities who live there from those in authority when development is considered. #TheProdigal helps give a voice to the communities who live there and this is what makes this book such a compelling and realistic read.
If you enjoy true to life, gritty novels with a social conscience then this is one for you! I loved it and hope that there is a second one coming out soon!
To buy the book then please click below:
The Prodigal by Nicky Black (Amazon)

2 thoughts on “The Prodigal: Nicky Black”