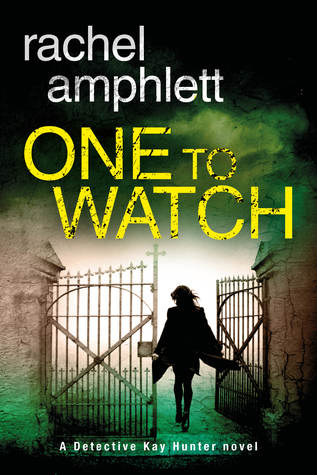 I’m absolutely BUZZING to be closing down this #BlogTour along with Amy over at NovelGossip , In fact, I’m running around my house doing the happy dance as we speak!

It is a bit of a fan girl moment for me as I have to admit that I am a huge fan of Rachel Amphlett and her #DetectiveKayHunter series. I have followed it from the very beginning and delighted to have been involved in the blog tours and cover reveals of the previous two books #ScaredToDeath and #WillToLive, so when Emma of Emmathelittlebookworm asked me if I wanted to be a part of this #BlogTour for the third Kay Hunter novel, I was happy to ignore my toppling #TBR pile and my #ReviewList to make the space in my diary to participate!

A huge thanks to Emma for organising the tour and Rachel along with #SaxonPublishing for giving me the chance to be a part of it! Let’s get this show on the road folks!

Detective Kay Hunter and her colleagues are shocked by the vicious murder of a teenage girl at a private party in the Kentish countryside.

A tangled web of dark secrets is exposed as twisted motives point to a history of greed and corruption within the tight-knit community.

Confronted by a growing number of suspects and her own enemies who are waging a vendetta against her, Kay makes a shocking discovery that will make her question her trust in everyone she knows.

One to Watch is a gripping murder mystery thriller, and the third in the Detective Kay Hunter series.

Oh, my! What a tangled web we weave when first we practice to deceive! One to Watch is a rollercoaster ride of a read that will have you hurtling through lies, deceit and secrets. When Sophie Whittaker is brutally murdered at a party thrown to celebrate her “purity pledge” and engagement to Josh Hamilton, Kay Hunter and her team unravel a tangled web of lies and secrets as they investigate the murder. Once again though, Kay finds her investigations hampered by instructions from the top and faces the dilemma of not knowing who she can trust as it becomes clear that someone out there is out to get her…and it’s personal!

Kay Hunter is up there on my list of all time favourite female detectives. I’ve followed the development of her character throughout the series and Rachel Amphlett has created one of the best female detectives out there. Life runs deep for Kay with difficulties and betrayals in her personal and professional life but she approaches them with a #KickAss attitude and isn’t going to let anything stand in the way of her doing her job. Despite this we get to see a more vulnerable side of the character as the series develops; her struggles to trust others are magnified as it becomes clear that there is someone out there who is determined to bring her down and the steps to do so become darker and darker with each book. I love her relationship with her team, her loyalty at times swayed by events but never floundering despite DCI Larch’s overt dislike of her and his attempts to thwart her at every turn. DCI Larch – oh he is the baddy that just makes me want to go “boo, hiss” every time he appears – I really do hope he gets his comeuppance as this series continues.

One To Watch throws so many suspects into the mix I began to think everyone was involved! And this kept me guessing all the way up to the very end, twists and turns galore had me engrossed so much so that I read this book in one sitting – I literally could not put it down!

A fascinating insight into the lives of those who are driven by class and status, One To Watch explores the unravelling of families who seek to bury so many secrets that they fail to see what is happening around them. I was intrigued by the “Purity Pledge” storyline, so much so that I had to go do some googling to find out more about it – it makes for some compelling research and throws up all sorts of issues around the gender roles, patriarchy and sexual health and the fact that those who sign the pledges are more likely to end up pregnant than those who don’t!

I am delighted and honoured to have been involved in blogging about these books since the start and I tell no lies when I say this series just gets better and better. One to Watch was a riveting and compelling read. It will satisfy the most hungry crime fiction reader out there! If you haven’t read any of this series yet then why not!

Rachel Amphlett is the bestselling author of the Dan Taylor espionage novels and the popular new Detective Kay Hunter series, as well as a number of standalone crime thrillers.

Originally from the UK and currently based in Brisbane, Australia, Rachel’s novels appeal to a worldwide audience, and have been compared to Lee Child, James Patterson, and Chris Chibnall.

She is a member of International Thriller Writers and the Crime Writers Association, with the Italian foreign rights for her debut novel, White Gold, being sold to Fanucci Editore’s TIMECrime imprint in 2014, and the first four books in the Dan Taylor espionage series contracted to Germany’s Luzifer Verlag in 2017.

To buy the book please click the link below!

5 thoughts on “#BlogTour: One to Watch by Rachel Amphlett”