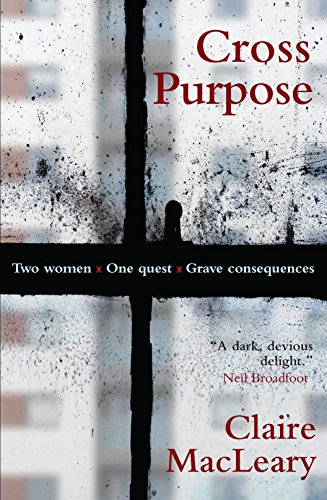 Today I am delighted to be hosting today’s spot on the blog tour from the lovely Claire MacLeary, author of #CrossPurpose, published by Saraband/Contraband I read Cross Purpose a couple of months back after attending Claire’s book launch in Waterstones, Argyle Street, Glasgow. If you ever get a chance to attend one of Claire’s events please don’t miss it – she is a woman of hidden depths and she is hilarious! You can read about the event here Cross Purpose Book Launch

As well as sharing my review I have a fab Q&A with the lady herself!

Welcome, Claire. Before we start, could you tell me a little about yourself?

I’ve had a long and varied career, first working in newspaper and television advertising, then in HR. After my two children were born, I set up in business, first as an antiques dealer – with a baby under one arm – then with a number of shops.

Writing is my first love. I read English at university and returned to do a MLitt in Creative Writing when my son and daughter reached senior school. Having several of my short stories published gave me the confidence to write a full-length novel.

I have recently down-sized from a Fife village to the West End of Glasgow, and divide my time between there and St Andrews on the east coast.

Today we are talking about your new novel: Cross Purpose. Could you give us a quick summary and introduce us to your leading ladies?

Maggie, a stay-at-home mum of two teenagers, is devastated when ex-policeman husband, George, is found dead in his struggling detective agency. Divorced Wilma, recently moved in next door, rides to the rescue, persuading Maggie to take on George’s business as a conduit both to paying the bills and restoring his good name.

When a crudely mutilated body is discovered in St Machar kirk-yard, the two women are drawn into an unknown world of Aberdeen’s sink estates, clandestine childminding and drug dealing.

When we first meet Maggie she is at her lowest ebb, is Cross Purpose a crime thriller but also a motivational tale to highlight fighting spirit?

I see it as a celebration of ordinary women. When I first started researching my novel, I was struck by the preponderance of lead characters who were either detectives with divorce/alcohol/drugs backgrounds or highly qualified forensic scientists. What if someone were to write a crime novel, I wondered, in which no one was qualified in anything?

My years in business introduced me to scores of women who had no paper qualifications, yet managed to juggle family life with a part-time job, sometimes several jobs. Not only able to multi-task, these women proved to me, time and again, that they could rise magnificently to whatever challenges were thrown at them.  It was this competence, inner strength and resilience that I wanted to celebrate in writing Cross Purpose.

Cross Purpose takes place in Aberdeen is that a city you know and love? Also – do you feel Aberdeen lacks representation on the bookshelves?

I lived in Aberdeen for a number of years and both my children were born there. I still have good friends in the Granite City and holiday every year on Royal Deeside.

When I did my research, I felt the Scottish Central Belt was well represented, the North-east less so. As an antiques dealer, I came to know both the city and its agricultural hinterland, attending sales most evenings and farm roups at weekends. My husband was an academic at the time and a willing babysitter!

One feature of Aberdeen based stories which may not be something that many readers come across…Doric.  How important was it to capture the dialect of the North East and what was your Editor’s reaction?

When I first moved to Aberdeen, I found Doric impenetrable, and it took me a long time to respond to the question, “Fit like?”, without feeling – and sounding – a total fool. Nor did I realise that many people slip in and out of the Doric in their everyday speech, depending on who they’re talking to.

I think the use of Doric in Cross Purpose serves both to reinforce the sense of place and, in Wilma’s case, add the pithy humour necessary to balance the darkness of the subject matter. However, I’ve had to moderate the local dialect on the advice of my publisher, Saraband, so that potential overseas sales aren’t adversely affected.

Cross Purpose released earlier this year, what sort of reaction have you received from readers and how does it feel to do events such as Noir at the Bar?

Cross Purpose was launched in February at Aberdeen’s inaugural crime festival, Granite Noir. I loved the atmosphere at The Lemon Tree and was touched by the many friends and members of the public who came along to support me.

Since then I’ve done a number of events. It has been great fun, both to meet other authors and avid crime readers, and my debut has been well received, attracting extensive press coverage and five-star reviews.

My first Noir at the Bar, at Aberdeen’s Belmont Cinema, was daunting, with celebrated Scandi authors on the bill. But Big Wilma, as she has come to be known, raised a resounding cheer. A subsequent NATB in Edinburgh was also lively, and I’m looking forward to my next appearance in Dundee on 26 July.

Last one…I was just about to send you these questions when the 2017 McIlvanney Prize nominees were announced. I couldn’t help but notice that Cross Purpose is in the final 12 – Congratulations!  When did you find out and have you been celebrating?

I found out last Monday on a boat in Bratislava. I was on a week’s holiday, having just handed my next book, Burnout, to my editor. Sara Hunt, my publisher, had been trying to call me. My phone was switched off, and there was no Wi-fi reception other than in Bratislava’s old town. So I rushed ashore, found a bar, and the rest… Well, what would you do if your debut novel was up there with Val McDermid, Denise Mina, Lin Anderson, Ian Rankin?

Thanks for that Claire, a wonderful insight into the woman behind the book!

Two Women, One Quest, Grave Consequences When Maggie Laird’s disgraced ex-cop husband suddenly dies, her humdrum suburban life is turned upside down. With the bills mounting, she takes on his struggling detective agency, enlisting the help of neighbour ‘Big Wilma’. And so an unlikely partnership is born. But the discovery of a crudely mutilated body soon raises the stakes… and Maggie and Wilma are drawn into an unknown world of Aberdeen’s sink estates, clandestine childminding and dodgy dealers.
Cross Purpose is surprising, gritty, sometimes darkly humorous – a tale combining police corruption, gangs and murder with a paean to friendship, loyalty and how ‘women of a certain age’ can beat the odds.

I’ve had #CrossPurpose sitting on my shelves since publication day. I bought the book at Claire’s launch in Waterstones, Glasgow earlier this year – there was no way I could resist after listening to her readings from the book…and Claire’s unique sense of humour meant I was hooked!

Cross Purpose gives us Maggie Laird and her neighbour and unlikely business partner, “Big Wilma”. The two women are thrown together following the death of Maggie’s husband, George. He had been a policeman before being “forced” into early retirement from Police Scotland and had set up his own PI Business. Maggie finds herself in dire straits financially and Wilma convinces her to keep George’s business running. Desperate to clear her deceased husband’s name, Maggie is soon embroiled in some dark and dangerous investigations. Set in some of the least desirable areas of Aberdeen, Cross Purpose is a fast-moving, humorous, yet dark read which leaves you feeling slightly grubby at times, yet rolling around laughing with the two women at others. I loved the Doric slang which gave it a real authenticity and having lived in Aberdeen for a short while myself, I found my inner doric voice reading in my head!

Maggie and Wilma are poles apart – Maggie is a petite and quite refined woman who seems to have lived a very sheltered life while “Big Wilma” is as her name suggests, a larger than life, down to earth character who has been around the block a bit but has a heart of gold. On the surface, they are an unlikely pairing but strangely they work well together and compliment each other superbly! Their off the cuff humour had me giggling and their determination brings some very unsavoury characters to the fore throughout the book.

This is Claire’s debut novel and much is spent building the relationship between the two woman and laying the groundwork for their new business venture, which means there is more to come from this delightful duo! A couple of times throughout the book, I felt that things were wrapped up just a little too quickly in the circumstances. However, this does not detract from the fact that it is a stonking debut novel and comes highly recommended. Claire MacLeary is a fresh new voice in Scottish Crime Fiction and this Quine is one for the watching!

Claire MacLeary lived in Edinburgh, Aberdeen, and Fife, before returning to her native Glasgow. She describes herself as “a feisty Glaswegian with a full life to draw on”. Following a career in business, she gained an MLitt with Distinction from the University of Dundee and her short stories have been published in various magazines and anthologies.

Claire is currently working on Burnout, the sequel to Cross Purpose.