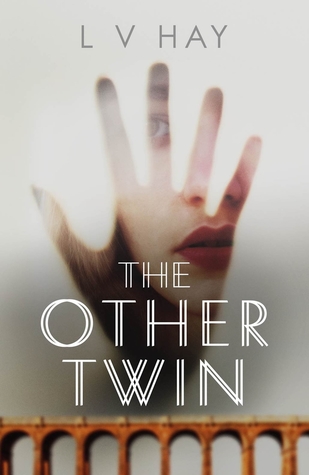 I’m not going to lie I have been eagerly awaiting this latest #Orenda book since I first spotted that cover! I mean it has been shouting out “READ ME” to me for ages! So when Anne at Randomthingsthroughmyletterbox invited me to take part in the #BlogTour I was hyperventilating with happiness! And of course it is published by Orenda Books so it was definitely a Buckle up and enjoy the ride moment for me! Thanks to Anne and Karen for including me on the tour!

When India falls to her death from a bridge over a railway, her sister Poppy returns home to Brighton for the first time in years. Unconvinced by official explanations, Poppy begins her own investigation into India’s death. But the deeper she digs, the closer she comes to uncovering deeply buried secrets. Could Matthew Temple, the boyfriend she abandoned, be involved? And what of his powerful and wealthy parents, and his twin sister, Ana? Enter the mysterious and ethereal Jenny: the girl Poppy discovers after hacking into India’s laptop. What is exactly is she hiding, and what did India find out about her? Taking the reader on a breathless ride through the winding lanes of Brighton, into its vibrant party scene and inside the homes of its well-heeled families, The Other Twin is a startling and up-to-the-minute thriller about the social-media world, where resentments and accusations are played out online, where identities are made and remade, and where there is no such thing as truth.

Feeling decidedly like Alice through the Looking Glass sliding down the rabbit hole and into The Lanes of Brighton as Poppy sets out to uncover what happened to her sister, I found myself immersed in this novel right from the very first page. Delightfully disorientating, chilling in its deception, The Other Twin burrowed its way into my brain as I followed Poppy and the mysterious narrator who was unfolding a tale I really wasn’t sure that I wanted to hear!

I can’t help but compare my reading experience to Alice in Wonderland – with the White Rabbit as the spark of Poppy’s curiosity and desire to discover what lay behind her sister, India’s apparent suicide. The mysterious King and Queen of Hearts (the invisible narrators throughout the book) with their control over their “followers” and the whole notion of the “Mad Hatters Tea Party ” concept in which societal “norms” are abused and used to the advantage of the narrators. The Other Twin is a complex and compelling exploration of it all!

But fear not, it was not some wacky bizarre read, rather it was an intelligently and tightly constructed plot which uncovered a myriad of secrets, lies and covert cover-ups and left me reeling as it all became clear what had been happening.

As a character Poppy, completely engaged me, I found myself thinking with her head on my shoulders, who could I trust and just how far should I go to uncover the truth? I really became caught up in the complexity of her character and the depths of emotions she experiences following the death of her sister and the unravelling of life as she knew it. Although we did not get to “meet” India in the book her character is uncovered through posts on her blog which gave cryptic clues as to what she had become involved in and this use of current social media trends was an excellent addition to the storyline – giving it a true to life connection to the world that we all inhabit these days.

Each character comes with a depth and a complexity that slowly unfolds as the story develops; I found myself swaying from believing them and disbelieving them throughout, I wanted so much for Poppy to uncover what had really happened that my focus was on her throughout. The “invisible” narrators voices really had me in turmoil, I could not for the life of me work out who they were and what exactly they were involved in – but I knew that it was bad with a capital B!

Set in Brighton, the most bohemian and free thinking city and home to the largest LGBT community, The Other Twin is also a heartfelt and emotional exploration of identity, acceptance and what it is like to be “different” even in a community where difference is the norm. It tugged at my heartstrings and by the end, I was visibly moved by the outcome and found myself cheering on Poppy further as they mystery was unwrapped before my very eyes.

This book ticked all my boxes – characters – complex and engaging; plot – twisted and conniving; the setting provided my need for a very real sense of place and I found myself on the streets of Brighton alongside Poppy every step of the way.

If you like your psychological thrillers, dark, compelling, twisted, thought provoking and emotional with a real sense of the here and now then you are going to LOVE The Other Twin!

Lucy V. Hay is a novelist, script editor and blogger who helps writers via her Bang2write consultancy. She is the associate producer of Brit Thrillers Deviation (2012) and Assassin(2015), both starring Danny Dyer. Lucy is also head reader for the London Screenwriters’ Festival and has written two non-fiction books, Writing & Selling Thriller Screenplays, plus its follow-up Drama Screenplays. She lives in Devon with her husband, three children, six cats and five African Land Snails.

To buy the book please click the link below:

Amazon UK: The Other Twin

Amazon US: The Other Twin

3 thoughts on “#BlogTour: The Other Twin by Lucy V Hay”