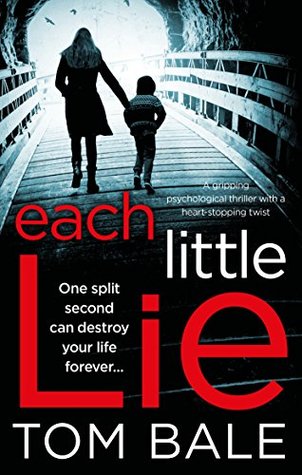 Oh, how I love a #Bookouture book and a Tom Bale release always appeals to me as I love his writing style. I was, therefore delighted when the lovely Kim from Bookouture contacted me and asked me to be on the Blog Tour  I had a complete fan girl moment!

One split second can destroy your life forever

Single mother Jen Cornish is just trying to hold things together for the sake of her seven-year-old son Charlie. Until the day when she does an impulsive good deed to help a neighbour, setting off a terrifying chain of events that quickly spirals out of control…

When she is arrested for a crime she didn’t commit, Jen quickly starts to wonder if someone is playing a cruel game with her – or is she losing her mind?

Desperate to clear her name with the police, she must first untangle a chilling web of lies. But someone is watching her every move – and it isn’t just Jen who is in danger.

They’re watching her child as well.

“Each Little Lie” is the story of Jen Cornish, whose life is thrown into turmoil following a small act of kindness for a neighbour. Jen is quickly catapulted into a living hell as she is arrested for a crime that she is sure that she did not commit. She is torn between convincing herself that she is being targeted by someone unknown or that she is somehow losing her mind. But when her son, Charlie, is placed in danger her fear knows no bounds as she races against the clock to uncover the truth.

Tom Bale has this uncanny knack of taking an ordinary situation and twisting it into something so bizarre but at the same time so believable that you find yourself glued to the pages and compelled to read without putting it down!

Less than 3 chapters in and I found myself screaming at Jen – Noooooooooooo! What the hell are you doing woman – you just know that this good turn you are doing is going to turn out so bad….I could almost hear the scary movie soundtrack playing as I turned the pages! At the start Jen irritated the living daylights out of me, I could not believe some of the things she was doing – I found myself lying in bed thinking what would I have done in that situation – which is a sure sign of brilliant character portrayal, when as a reader I found myself inside the head of the character and that’s where I was for the entirety of the book!

In “Each Little Lie”, Tom Bale has created a small but tightly connected group of unreliable narrators. Each and every one of them was plausible yet unbelievable at the same time. As a reader, my head was tied up in knots not knowing who I should trust. From Jen’s ex-husband, Freddy and his philandering ways to his overbearing and manipulative father and media star, Gerard; the cast of characters that were written into the narrative created a chatter in my brain that threatened to send me into meltdown!

One character, however, deserves special mention as you need to be warned about him! Russell – ugh what an odious little man – you may want to wear some gloves when you are reading about this as he is going to make your skin crawl. Eugh I still shiver thinking about him!

I have enjoyed all of Tom Bale’s books; his brilliantly twisted mind has created yet another dark and suspenseful masterpiece in “Each Little Lie”! I read his books with a #WTF moment as each chapter unfolds; despite stretching the bounds of reality – because I read it saying to myself, yeah right as if that is going to happen! – his books are some of the most compelling reads I’ve come across in this genre – extraordinarily bad things happening to very ordinary people in everyday circumstances grab my attention from the start and “Each Little Lie” is no exception to the rule! Did I enjoy it? Yes in a stomach churning, fearfully, paranoid way I LOVED it! 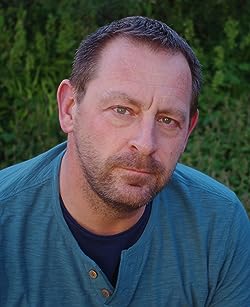 Tom Bale is the author of eight books, including the bestsellers SEE HOW THEY RUN and ALL FALL DOWN. He has been writing since the age of seven and completed his first novel at fifteen. After twenty years and hundreds of rejection slips, his first novel SINS OF THE FATHER was published under his real name, David Harrison. With his next book, SKIN AND BONES, he acquired an agent, a pseudonym and a book deal that enabled him to write full-time. He lives in Brighton with his family. Visit his website at http://www.tombale.net, follow him on Facebook, or on Twitter: @t0mbale (zero instead of “o”).

The book is available from 29th June
UK