The McIlvanney Prize is Bloody Scotland’s annual prize awarded to the best Scottish Crime book of the year. It provides Scottish crime writing with recognition and aims to raise the profile and prestige of the genre as a whole. Scottish roots are a must for competition applications: authors must either be born in Scotland, live there or set their books there. Crime fiction, non-fiction, and anthologies of short crime stories are all eligible. The prize was renamed in memory of William McIlvanney, often described as the Godfather of Tartan Noir, in 2016.

Fourth on my list was “Beneath the Skin” from Sandra Ireland 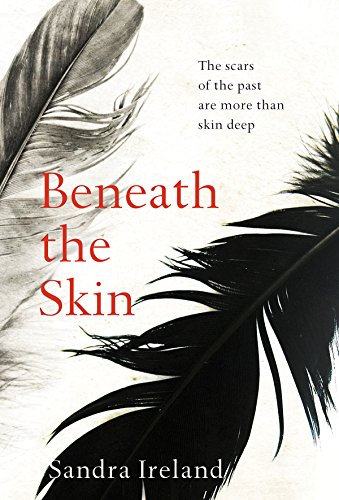 A taxidermist with a secret. A soldier with nothing left to fight for. A mother determined to protect her young son. Together, can they fight a past that doesn’t want to let them go?

Taking a job in the studio of an Edinburgh taxidermist is probably not Walt’s wisest move. Already suffering from combat stress, and struggling to outrun the horrors of his time on the front line, he finds himself confronted by the undead on a daily basis.

His boss Alys and her sister Mouse are sharing a secret that is threatening to destroy them. When Mouse’s eight-year-old son disappears, can Walt find the strength for one more battle and finally lay the past to rest?

This compelling thriller peels back the skin of one modern family to reveal the wounds no one wants to see. It deals with the effects of trauma, and explores how facing up to vulnerability is sometimes the only way to let go of the past.

Oh, what a dark and macabre read! I felt as though I was peering into the windows of a doll’s house from hell reading this book! Descriptive narrative and characters that chilled me to the very bone. However, I felt the build up to the climax just took a little too long and it lacked the punch I was looking for until the last 30% of the book where it ramped up again, but by this time I had guessed the outcome and was left feeling slightly disappointed.

For many years, I thought I’d been born ON Doncaster Racecourse. This was not the case, but the result of classic parental misdirection. “You were born there, Sandra!” Ma and Pa would cry, waving at the TV screen whenever the St Leger was on. I was nine before I realised they meant the town, not the racecourse. I do love horses though.

Growing up, we moved to North Yorkshire (a garden with fruit trees and room for the pony I never got), to Sheffield (a newbuild beside a Gothic Rectory) and Northumberland (old castles, stepping-stones in the river).

After dropping out of uni at 18, I ran off to Éire to live The Good Life (goats, pigs, chickens) before returning to Scotland with two children and a pile of skulls skills I’ll probably never use again. A stint as a heraldic artist and a café owner followed, before the writing bug bit deep.

It was always my mother’s wish that I go back to education, and I eventually did, at a time when most folks are calculating their pensions. I’m a great believer in following your heart. Age shouldn’t get in the way of being creative or achieving your dreams. I began writing fiction after my Mum died as a way of coping with grief, and that led to me enrolling at the University of Dundee as a mature student. Studying wasn’t easy, and I did an early morning cleaning job before lectures in order to make ends meet. I graduated in 2013 with a First Class Honours degree in English and Creative Writing, and went on the study for the MLitt in Writing Practice and Study with the help of Carnegie- Cameron Scholarship.