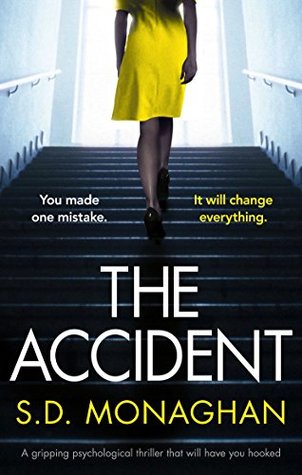 As usual when that #Bookouture Siren calls I am unable to resist the lure of her call and so here I am on the blog tour for #TheAccident from S.D Monaghan. Huge thanks to Bookouture and the author for the ARC to review! And may I say what a simply stunning cover to draw us all in!

One mistake could change your life forever.

Tara has it all. Married and about to move into her dream home, she can’t explain why she is tempted by one last fling with her ex before she settles down.

David would do anything for Tara. So when he finds her with another man, his world starts to crumble around him.

Ryan isn’t prepared for the punch David throws at him. Stumbling, he slips over the balcony and falls three storeys to the patio below.

How far would you go to save everything you have?

A twist-filled thriller for fans of The Couple Next Door, T.M. Logan and Rachel Abbott.

Well, what a twisted web we weave when first we practice to deceive indeed! Tara and David have, what appears to be the perfect lifestyle, recently married with a baby on the way and their dream home almost completed when Wham bam one hot and steamy night with her ex-boyfriend leaves their dream in tatters and both in fear of their lives! The Accident makes you ponder just how far you would go to save everything you have!

Reading #TheAccident was like watching one of those creepy movies where you just keep saying “nooooooooo don’t do that” to the screen; you know the ones with the soft but eerie music playing as the scenario unfolds before your very eyes! It’s not a fast-paced action thriller but rather a slow and suspenseful build up based on a split decision made by David when he discovers his wife, Tara, with her ex-boyfriend Ryan. The devil is in the detail with this novel and it provides a sinister and satisfying read.

I swung between empathy for the couple to a deep dislike of them both and their desire for a materialistic lifestyle and at first, this kind of threw me off kilter in my reading. Was I enjoying this book, was it what I was looking for or was it just a story of two little rich kids getting their comeuppance? Yet the deeper into the storyline I got the more it got its claws right under my skin! Did I particularly like the two main characters? Not really – but as a reader, I am ok with not liking a character – as long as their story engages me and they are believable then all is good with me. And engage me it did, I found it to be a thought-provoking read and I found myself, on a few occasions putting down the book to think, what the hell would I do in this situation! As a couple, Tara and David were very believable; we got to know them as individuals, what happened in their lives to bring them to where we find them and to leave them with the dilemma that they now find themselves in and as a reader, you don’t need to like them to be able to empathise with the decisions they had to make.

The plot itself was extremely clever, full of twists and extremely addictive; I read this book in one sitting. On the surface, it can come across as a bit of an over the top plot – like would that really happen?! But it is fiction right! And when you read fiction then you have to let your imagination be stretched a bit!

The Accident explores the themes of secrets and lies and what happens when we start to cover up and lie, just how far those little tiny lies spread and wrap their tentacles around everything in their path until there is no escape. It also places the reader in a position where they are compelled to think like the characters in the book to work out exactly how they would have reacted in a similar situation if they faced losing everything that they had.

An enjoyable, compelling and twisted read that will hook you in, spin you around and spit you out at the other end questioning your own morals and values! Enjoy!

#TheAccident can be purchased via Amazon using the link below: 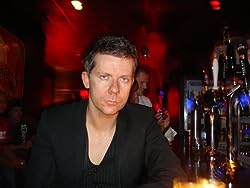 S. D. Monaghan grew up in Dublin, before travelling extensively in Asia, Europe and America. After teaching English in Thailand for two years, he moved back to Ireland and gained an honours degree in psychology. While living in Canada for four years, he studied screenwriting in Toronto. S. D. Monaghan completed the Masters in Creative Writing at Trinity College, Dublin with the editorial guidance of the Pulitzer Prize winner Richard Ford and Orange Prize nominee, Deirdre Madden. On the strength of his work there, he was chosen to represent both the university and the Oscar Wilde Writers’Centre to read excerpts at the Dublin Publishers Festival and on Dublin Culture Night.  He lives in Dublin with his wife, where he is currently working on his new novel. He is represented by Zoe Ross at United Agents.