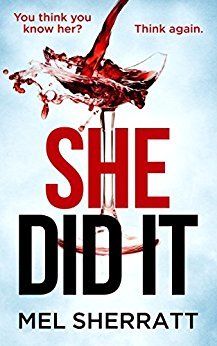 I’ve waited so long for a new book from Mel Sherratt and I’ll just start off the review by saying this one was well worth the waiting for! I absolutely love Mel’s #Estate series and adored #WatchingOverYou so I knew that I wasn’t going to be disappointed with #SheDidIt, her latest stand-alone psychological thriller!

So what does the blurb say?

From the million seller author comes a gripping psychological thriller.

A successful businesswoman, Tamara enjoys her champagne lifestyle to the full. At least, that is the front she displays to the world. As well as being lonely, she’s running out of money. A promising new member of staff brings the injection of fresh blood needed to win the contract that will turn things around.

Working for Tamara is a perfect ruse for Esther. But, along with fake references and qualifications, she also has a plan for revenge. Sensing Tamara’s vulnerability, Esther uses their acquaintance as a way of getting close to someone who hurt her in the past.

Tamara is keeping things secret. Esther has a dark side she is trying to hide. For both of them, lying is a habit. But when mistakes begin to catch up with Esther, and people start dying, Tamara realises she’s chosen the wrong person to trust as a friend…

#KillerHook opening alert! Right from the start, I knew that there was something very wrong and oh so very bad going to happen in #SheDidIt and OMG so much blood in that prologue was the killer hook opening for me!

Tamara and Esther come together as Tamara seeks someone to give her failing business the boost that it needs, while Esther has clearly been seeking someone to help her in her quest for revenge. Two women – both with something to hide, both of them liars and together they provide a chilling psychological thriller that will have you on the edge of your seat!

Loved the references to the publishing world and marketing campaigns for the launch of the book as well as the shout out to bloggers involvement in the process.

As characters it was extremely difficult to warm to either woman, they are unreliable narrators and both using each other for their own means, however,  as the plot develops you begin to see what lies behind the insecurities and lies and the vulnerability that has left them damaged but can they be repaired?

The very sense of ordinariness about #SheDidIt is what makes it so chilling, how often do we accept and invite people into our lives and open up to them; when do we know when we are being manipulated or a true friendship?

Stick with the changing timelines and the unseemingly unconnected crimes, it all ties up into a twisted and brilliant conclusion that makes perfect sense.

#SheDidIt is A delightfully twisted web of lies and deceit that will trap you in the pages and leave you screaming for just one more chapter before you put it down!

#SheDidIt can be purchased using the link below 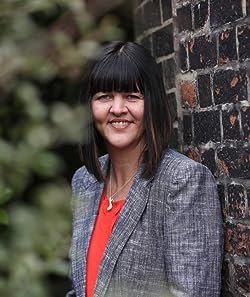 My novels take you to the heart of the crime. I write police procedurals, psychological suspense and crime dramas – fiction with a punch. Shortlisted for the prestigious CWA (Crime Writer’s Association) Dagger in Library Award 2014, my inspiration comes from authors such as Martina Cole, Lynda la Plante, Mandasue Heller and Elizabeth Haynes.

Since 2012, all ten of my crime novels have been bestsellers, each one climbing into the Kindle UK top 20 and I’ve had several number ones. I’ve also had numerous Kindle All-star awards, for best read author and best titles.

DETECTIVE EDEN BERRISFORD works in a community intelligence team and helps to gather information and intel for investigations. THE GIRLS NEXT DOOR is the first book, followed by DON’T LOOK BEHIND YOU.

TAUNTING THE DEAD is part police procedural/part psychological thriller. It was a standalone for two years but I have now written two more books with Detective Sergeant Allie Shenton as a main character to create a trilogy. FOLLOW THE LEADER is book two and ONLY THE BRAVE is book three.

THE ESTATE SERIES is a mix of psychological suspense and family life with a sprinkling of grit and a dash of menace – where drama meets crime. There are four at the moment, available individually or you can read the first three as a box set. WRITTEN IN THE SCARS, is the latest in the series to be published.

WATCHING OVER YOU is a standalone psychological thriller. It’s dark in places, light in places, disturbing in places too – where obsession and friendship turn into murder.

I also write women’s fiction under the pen name of Marcie Steele. Stirred with Love, The Little Market Stall of Hope and Heartbreak and The Second Chance Shoe Shop are out now.

I live in Stoke-on-Trent, Staffordshire, with my husband and terrier, Dexter (named after the TV serial killer) and make liberal use of my hometown as a backdrop for some of my books. You can find out more at my website http://www.melsherratt.co.uk or I’m on Twitter at @writermels

***Not tried The Estate Series yet? For a limited time, you can grab a copy of the ‘behind the scenes look’ at the series, Secrets on The Estate. Just copy and paste this link into your browser for your free book: http://bit.ly/1fFPgmD ***