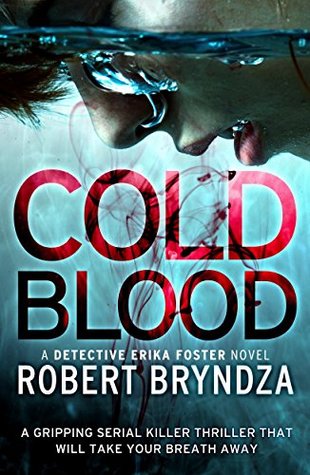 It’s no secret that I’m a huge Robert Bryndza fan and that his Erika Foster series is one of my favourite police procedurals out there! So when the lovely Kim and Noelle from Bookouture asked me to be a part of the #BlogTourBlitz for #ColdBlood, number five in the series then I’m sure you could hear my scream of YEEEEEEEESSSSSSS all the way down in big old London town! Huge thank you to Bookouture and Robert for the ARC for review.

And that cover! I mean, have you ever seen anything as #Covergasmic as this!

She fell in love with a killer, now she’s one too.

The suitcase was badly rusted and took Erika several attempts, but it yielded and sagged open as she unzipped it. Nothing could prepare her for what she would find inside…

When a battered suitcase containing the dismembered body of a young man washes up on the shore of the river Thames, Detective Erika Foster is shocked. She’s worked on some terrifying cases but never seen anything like this before.

As Erika and her team set to work, she makes the link with another victim – the body of a young woman dumped in an identical suitcase two weeks ago.

Erika quickly realises she’s on the trail of a serial killer who’s already made their next move. Yet just as Erika starts to make headway with the investigation, she is the victim of a brutal attack.

But nothing will stop Erika. As the body count rises, the twin daughters of her colleague Commander Marsh are abducted, and the stakes are higher than ever before. Can Erika save the lives of two innocent children before it’s too late? She’s running out of time and about to make a disturbing discovery…there’s more than one killer.

Brilliantly gripping, Cold Blood will have you hooked from the first page and holding your breath to the heart-stopping and shocking ending.

And #Boom, Erika is back! When a suitcase containing the remains of a dismembered male is washed up on the banks of Thames, DCI Erika Foster makes the link with a similar case a couple of weeks earlier when the body of a female was also discovered dumped in a suitcase. With her new superintendent anxious to transfer the case to the drugs squad, Erika is determined to keep this one under her control. And we all know just how determined Erika can be! Her determination doesn’t save her from a brutal attack which sees her confined to home and off the job but when another body turns up and the family of Commander Marsh are affected then there is no way Erika will be sitting back and licking her wounds at home!

#ColdBlood is book five in the series,  and yes you could read it on its own but why would you when the other four are just screaming out to be read!

Told in flashbacks between the present time and last year as we follow the two characters central to the investigation; cleverly segmented and written providing the back story for the readers to unwrap alongside the main course!

Personal lives are tangled with professional; lies, deceit and betrayal and thrown into the mix a good dollop of twisted relationships, addiction, and guilt; all these ingredients combined have cooked up a tightly crafted and powerful police procedural with one kick ass female detective charging headlong into the pages! Do not miss this!

Assumptions are challenged about addiction and the idea that all addicts are claiming benefits and living in squalor is shelved in this book and I loved the great line written by Robert ” we are all just a few pieces of bad luck away from having to make horrible choices to survive” it just hits the subject right home.

Erika Foster, I bloody love her! She has got guts, balls and is not afraid to raise her head above the parapet but she has also got a vulnerability and this comes to the fore in Cold Blood; she lets the readers catch a glimpse of her softer side, her emotions and her fears slowly making their way to the surface at times.

As usual, Erika’s relationship status remains at the “it’s complicated” level and in #ColdBlood DI Peterson is in recovery, will he and Erika recover from the incident that left him fighting for his life! We also see Commander Marsh back on the scene after being reinstated, he and Erika have history, is this about to unearth itself again!

Max and Nina, too much to say about these two but don’t want to give any spoilers away – just be prepared to be contradicted in your feelings for this pair as the book progresses.

DCI Melanie Marsh, the new superintendent, I wasn’t sure what I thought of her; a bit of a wimp compared to Erica I guess but I’m sure Robert has great plans to bring her out of her shell!

There were so many heart stopping twists and turns that my jaw hit the deck over and over again! Fast paced and edgy with an energy and vibe about the narrative that hooks you right from the very start!

Cold Blood just kept ramping up the pressure page by page with no let-up, it didn’t take its foot off the gas once! I’m exhausted now! (But in a great way!)

Robert Bryndza is the king of keeping you awake, that one more chapter sees you reading way past your bedtime into the wee small hours!

You can buy the book here:

I was lucky enough to meet Robert at Harrogate this year and he is every bit as lovely in real life as he is on social media!

Robert Bryndza is the author of the international #1 bestseller The Girl in the Ice. The Wall Street Journal and USA Today bestseller is the first book in the Detective Erika Foster series.

The Night Stalker, Dark Water, and Last Breath are the second, third, and fourth books in the series, and the fifth book, Cold Blood is now available to pre-order.

Robert’s books have sold over 2 million copies, and have been translated into 27 languages.

In addition to writing crime fiction, Robert has published a bestselling series of romantic comedy novels. He is British and lives in Slovakia.