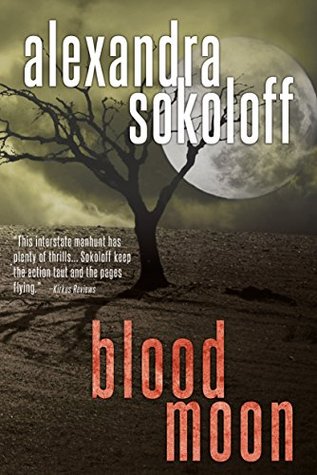 With thanks to TBConFB Reviewers Group and the author, Alexandra Sokoloff,  for a copy of Blood Moon for review which I chose to review and give my honest opinion.

Twenty-five years have passed since a savage killer terrorized California, massacring three ordinary families before disappearing without a trace.

The haunted child who was the only surviving victim of his rampage is now wanted by the FBI for brutal crimes of her own, and Special Agent Matthew Roarke is on an interstate manhunt for her, despite his conflicted sympathies for her history and motives.

But when his search for her unearths evidence of new family slayings, the dangerous woman Roarke seeks – and wants – may be his only hope of preventing another bloodbath.

It is highly recommended that you read Book 1 of the series, Huntress Moon, first.

Well, I’ve found myself on a bit of a Huntress Binge after devouring the first in the series, I just had to dive straight into book number two. Blood Moon sees us two weeks after the end of book one with Roarch and team closing down the raids that they had started in the last book. The opening scene pulls no punches, the guys they are bringing down are seriously bad guys of the “baddest” kind and you are left in no doubt the trauma and cruelty they have inflicted on their victims.

FBI special agent, Matt Roarch has teamed up with Epps and Singh again as the hunt for the huntress is underway. They have a new guy on their team, Ryan Jones, and we are also introduced to Roarch’s boss, Special Agent in Charge, Reynolds. There is clearly some tension between Roarch and Reynolds with the latter wanting him off this case and back to his place in Criminal Organisations.

In a bid to hunt Cara down Roarch and his team uncover evidence of another family having being murdered, will Roarch try to seek the assistance of the Huntress to prevent any more brutal slayings?

Roarch’s desire to catch The Huntress is called into question and this is echoed by Agent Epps who is suspicious of his boss’s motive in wanting to catch up with her but I have got to say I am firmly siding with Roarch on this one! She is one kick-ass serial killer and the one that you really do want to get away!

The book is interspersed with Roarch’s nightmares, the Lindstrom massacre when he was a boy, and the crime that set him firmly on the path to becoming an FBI agent and where his path crossed with Cara Lindstrom, but there is an additional element to his nightmares, hinting at his real reason for leaving the BAU.

I don’t always tend to do the old “hot and bothered” about male characters in books but Roarch, what can I say but phwoarr! I’ll bet he has a few hearts a fluttering and I’m not usually drawn to the clean-cut fed kind of guy but for him, I’m willing to make an exception!

We learn more of Cara’s demons, the monsters who haunt her and drive her to do what she does; we uncover more of her hidden past as she narrates her life while following Roarch as he tries to hunt her down. We really get a chance to delve into who Cara Lindstrom really is and that frisson is still bubbling between Cara and Roarch. This is a #Dynamite duo, seriously dynamite! I am hooked on the character of Cara Lindstrom and  I’m eager to see how the development of her character is going to play out over the series.

Cara is beguiling, intriguing and compelling, as a reader you cannot help but be drawn to her, to be rooting for her and wanting her to evade justice, there is just something deliciously evil about this book that entices you into the pages and refuses to let you go.

Alexandra doesn’t pull her punches in this series, covering dark subjects such as human trafficking, child abuse, addiction and prostitution it is easy to see why as a reader you would be firmly on the side of the Huntress in this one. While dark topics are explored the narrative is never gratuitous. This was one of those reads where your heart rate increases as you turn the pages and you cannot help but go faster and faster!

We end #BloodMoon with one of those made for TV cliffhangers (and this series so needs to be on our screens!) that ensures the reader is ready to dive straight into the next book. If you are looking for a fast paced, heart racing, gut-clenching killer of a read then get yourself a set of this series now! You will not be disappointed…you may lose out on some sleep as you read that famous “just one more chapter” but the bleary eyes in the morning are well worth it!

To get your copy pop on over to Amazon where it is available to purchase!