This is the first time I have ever attended #Tidelines Book Festival in Irvine and sadly I was only able to attend one event but you know me, I made the absolute most of it! It was blowing a wee hoolie down in Irvine today and the harbourside took me back in time to my childhood evoking fond memories of times on the beach (and some occasions being left in the car, with crisps and juice outside the Ship Inn with my cousin while our dads went in “to see a man about a dog” – we never did get that bloody dog!)

Anyway enough about my reminiscing! I was delighted to bump into the lovely Mary from Kindledelight Blog (look out for her posts later as she was there for a few events today!) before the main event started!

We sat and had a good wee blether before heading into the main event which was, of course, to hear Su Bristow talk about Sealskin (which is one of the most beautiful books I have ever read!) Su was being interviewed by Alison Craig today.

Su provided the audience with a brief background of the Selkie legend of which there are many variations. Sealskin is based on the powerful attraction between Selkies and humans; male Selkies are very willing to mate with female humans but do not often stick around whereas the female Selkie has to be “captured” by a male human who steals their skin thus preventing them from returning to the sea and it is this variation of the legend that Sealskin is based upon.

Su’s basis for the book came from Hilary Mantel’s quote from the Leith Lectures where she said “If you can locate the area of doubt, that’s where you go to work” with Su’s area of doubt being Donald taking Mairhi home to be his wife, she acknowledged that this act was a terrible and awful thing for Donald to have done, this was what was “wrong” for Su, this was her place of doubt, the abduction and rape of a young woman could never be right and she wanted to challenge this act, to make Donald grow and learn and make amends for the wrong he has done. Su admitted that there was an inherent danger in telling the story from Donald’s sole point of view, he was not a likeable character, he committed an awful act at the very outset but if you read the book you will experience the simple narrative, poetically written which engages the reader from the very start and doesn’t let go until long after the book is finished.

The themes of the book, roles of men and women, culture and community, the interplay between the sea and the land and the healing powers of women were all touched upon in the discussion with Su highlighting a very topical theme running through the book for her, one of the need for tolerance and compassion for people who are different to enable us all to live together in our communities.

We heard of Su’s own background, she is medical herbalist and the influence this played in writing the book; Su told us about her own family background and her mum (whom she dedicated the book to) and how she too lost her childhood far too early in life; Su spoke of Mairhi as being similar to a feral child where she missed the opportunity to learn how to speak yet her means of communication was much more powerful than mere words.

We were also delighted to find out that Su is currently working on another book, this time based on the legends of fairies, but not the cute little fairies we think of in a fairytale kind of way but rather the more malevolent and mischievous kind…I am definitely going to be looking out for that one!

All too soon the session was over and once again the sheer magic of Sealskin was evoked for me, I will honestly tell you if you want to read a book that will stay with you for a long time and worm its way under your skin then this is one of them (and that’s saying something from someone who is a diehard crime fiction/psychological thriller fan!). You can read my review of Sealskin here

And of course, it was then time to get the book signed and the obligatory picture was taken! And we also bumped into the lovely Gunnar Staalesen in the centre and so it was a definite photo opportunity not to be missed! 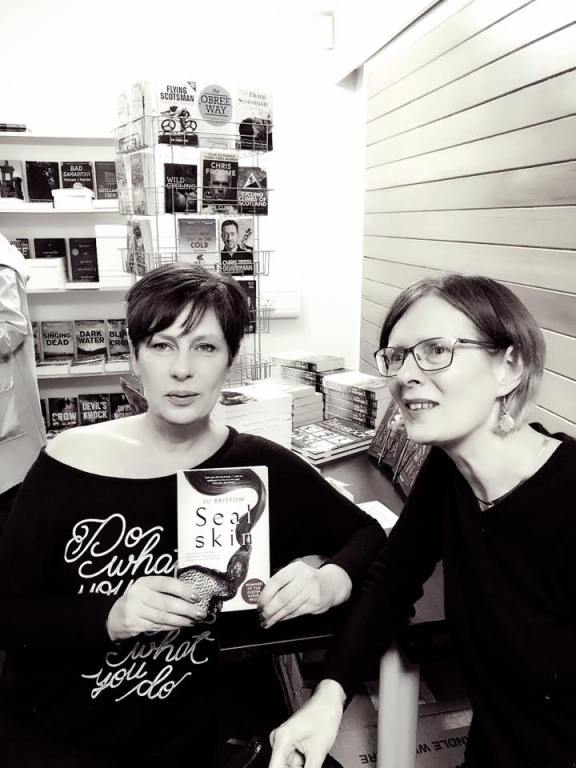