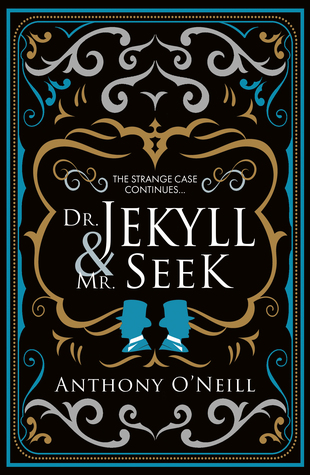 I had been invited to moderate an author event with Anthony O’Neill alongside Michael J Malone and Charles E McGarry to celebrate the launch of three gothic tales of mystery and suspense. So, naturally, I had to read the books before the event!

Now, this one might have been slightly out with my normal reading choice but oh boy am I glad that I picked this one up and read it (in less than a day I may add, so engrossed was I!)

Seven years after the death of Edward Hyde, a stylish gentleman shows up in foggy London claiming to be Dr Henry Jekyll. Only Mr Utterson, Jekyll’s faithful lawyer and confidant, knows that he must be an impostor – because Jekyll was Hyde. But as the man goes about charming Jekyll’s friends and reclaiming his estate, and as the bodies of potential challengers start piling up, Utterson is left fearing for his life … and questioning his own sanity.

This brilliantly imagined and beautifully written sequel to one of literature’s greatest masterpieces perfectly complements the original work. And where the original was concerned with the duality of man, this sequel deals with the possibility of identity theft of the most audacious kind. Can it really be that this man who looks and acts so precisely like Dr Henry Jekyll is an imposter?

I have to confess, I have never read the original Dr Jekyll and Mr Hyde (unless you count children’s versions of the story when I was younger) but I could remember enough of the storyline to give me a head start on this book.

We start seven years following the death of Mr Hyde and the disappearance of Dr Jekyll. Jekyll’s lawyer, Gabriel Utterson, is the sole heir to his estate and he is on the brink of taking over his inheritance when his plans are scuppered by the appearance of Dr Jekyll himself! Now Utterson knows the secret behind Dr Jekyll’s disappearance and so he knows this man is an imposter. However, it would seem that it is only Utterson who does not believe the great Dr Jekyll has returned. What follows is an excellent and expertly written account of the follow up to one of the classic novels of our time.

Straight away I was transported back to Victorian England and I actually found myself reading it as though I was living in that period too. I could feel the shock and revulsion at the crimes and events (which by today’s standards would be considered pretty tame!) that a Victorian lady might have felt reading the original story. The language, the characters and the atmosphere created were so realistic that it was a seamless transition into days gone by!

The portrayal of Utterson as a man determined to uncover the imposter was fantastic, it left my brain in a mess as I tried to work out who in fact was telling the truth? Had Dr Jekyll really returned and was Utterson going insane or was this imposter an intelligent and wily imposter who was adept at running rings around others. I questioned this all the way through the novel.

Anthony O’Neill certainly kept me guessing all the way right up to the very last page and even then he left me with even more questions! I was sure that I knew the truth but there was a part of me not quite sure at all!

Dr Jekyll and Mr Seek is available to purchase from