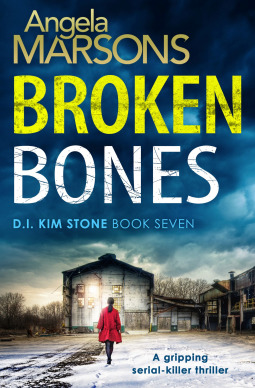 I actually cannot believe that this is the seventh book in the Kim Stone series! How time has flown since I first met this kick-ass DI! She’s like a fine wine, she just keeps on improving and Broken Bones is testament to that! I feel like I am repeating myself every time I write a review for the DI Stone series but OMFG this one actually had me engrossed so much so that it was essentially a one sitting read!

Thank you to Netgalley and the publishers for the review copy.

They thought they were safe. They were wrong.
The murder of a young prostitute and a baby found abandoned on the same winter night signals the start of a disturbing investigation for Detective Kim Stone – one which brings her face to face with someone from her own horrific childhood.

As three more sex workers are murdered in quick succession, each death more violent than the last, Kim and her team realise that the initial killing was no one-off frenzied attack, but a twisted serial killer preying on the vulnerable.

At the same time, the search begins for the desperate woman who left her newborn baby at the station – but what looks like a tragic abandonment turns even more sinister when a case of modern slavery is uncovered.

The two investigations bring the team into a terrifying world of human exploitation and cruelty – and a showdown that puts Kim’s life at risk as shocking secrets from her own past come to light.

That prologue! #killerhook alert! It just sets you up perfectly for the next in the Kim Stone series and you know it’s going to be good when your eyes fill up with tears while at the same time you gasp with shock as a young girl is pushed to her death. On the same night, a young baby is abandoned outside of the police station and this is just the start of an emotional whirlwind of a read.

DI Kim Stone is one of my favourite female ballsy detectives out there and in Breaking Bones, she loses none of those special qualities that I have grown to love over the series. But this time around we also see a softer side to Kim, as she uncovers some of the worst examples of human behaviours imaginable. I found it impossible not to be moved by the harrowing tales of prostitution, modern-day slavery and grooming that emerged as the story progressed. This was more than simply a police procedural for me, this was a loud and clear statement highlighting all that is wrong in our modern-day world. In a world where “poverty porn” has become a form of TV entertainment, where kids are so isolated and fractured from any sense of family that their own homes are no longer places of safety; a world where newspaper headlines scream about “murdered prostitutes” and lose focus on the person behind the label they have so cruelly and thoughtlessly attached; a world where other human beings are forced to flee the horrors of their own country only to end up as slaves in this country. This is what grabbed me about this book! Authors are sometimes criticised for using their work as a personal soapbox but I for one will never criticise authors like Angela and others who use their books as a means to make a statement and to get that message out there. If just one person reads this book and changes their assumptions and stereotypes about the people behind the headlines then it is always going to be worth it!

Ohhh sorry, I went off on a bit of a rant there didn’t I?! Relationships in the team put to the test with the addition of two new members of staff to assist in the current investigations and I found it intriguing to see how this impacted on the team dynamics. Yet despite this nothing impacts on the core strength of Kim’s team, they are tight-knit and they are all on the side of justice, even if it means bending the rules a little to get there! Aside from Kim, Dawson, kind of stole the show for me this time around, he has been keeping a secret but when it is revealed then my heart just about melted!

As I said before, the themes of the book are pretty dark and as such there are a number of odious characters but one that I’d never tire of slapping is Kai Lord, OMG he was vile! He made my skin crawl!

Each strand of the two plots weaves effortlessly together to provide a satisfying and nail-biting conclusion. As usual with Angela Marsons, she has taken what appears to be two very different cases but managed to make them work and turn them into a fully rounded plot.

It’s kind of hard to talk too much about the storyline without giving anything away but if I were, to sum up how this book made me feel, I’d have to say: Broken Bones broke me into tiny pieces, I was like a wrung-out sponge by the time I’d turned the last page. Never so much have I wanted to climb into the pages of a book and rescue so many characters. Angela Marsons is one of the most immensely talented writers out there; she has an exceptional skill in creating a cast of characters and a spider web of plots that will keep you glued to the book until it is finished. I’d strongly advise getting yourself well comfy before you start reading this as you are not going to move until you are done!

Broken Bones is available to purchase from the links below: