Oh, that naughty Noelle over at Bookouture just knows what to do to tempt me into agreeing to more blog tours! I mean look at that cover, check out that blurb! Tell me, how’s a girl meant to resist! And how glad I am that I did not resist! Massive thank you to Bookouture and the author for the ARC to review as part of the blog tour.

As she saw his face for the first time, she knew he was going to kill her. She just didn’t know when.

Three young women are dead. Thousands of miles between them and nothing except the marks on their bodies to link them.

Detective Jess Bishop sees something that strikes fear into her heart: the similarities between this case and the one she’s spent her entire career trying to forget. Brilliant and methodical, Jess always plays by the rules. But she’s not the person anyone thinks she is. And she’ll do whatever she can to keep her secrets hidden.

As more bodies are found, it seems Jess’ past is coming back to haunt her. And with her partner, Jamison, back from two years undercover, she doesn’t know if she can still trust him.

When the hunt goes cold, Jess knows she has to confront her past in order to catch the killer, even if that means making herself the bait…

Now You See Me is a gripping and heart-stopping thriller full of twists and perfect for fans of Robert Dugoni, Karin Slaughter, Robert Bryndza and Lisa Gardner.

“Now You See Me” starts with a bang, a killer hook prologue that tells you that the bad guy is just going to be one of the #baddest guys out there. We are talking pure psychopath material here, this guy has no empathy or remorse. This guy is going for the kill and that scene where he is sitting in the car practising a smile so as to get it just right, tingled my spine from top to bottom!

You know that way you read a book as though a movie is playing out in your head? You do? Well, I have just read a bumper episode of Criminal Minds with an added OOMPH! This book deserves all the #OMFGs as it grabbed me in from the start, chewed me up and spat me out at the other end crying for more!

Caught up in an investigation with chilling similarities to her past, Detective Jess Bishop is struggling to hold herself together. Only one man knows the truth about her past and it looks like she might have been wrong to place her trust in him. With the body count rising and the clock ticking will Jess have to lay her soul bare to ensure the killer is caught? A tense and fast-paced, and may I say perfectly executed, the plot kept me on tenterhooks all the way through it!

“Now You See Me” not only has a heart-racing plot, it is also an exceptional character-driven novel; I found myself getting right under the skin of Jess and Jamison, or rather I should say they got right under my skin. The tension and chemistry between the two of them was electrifying, it was magnetic. Both of them have secrets, secrets they want to keep buried. Both of them know each other’s secrets and this can either work to strengthen or compromise their relationship. When Jamison returns from his undercover assignment, Jess is thrown into turmoil; her feelings for him are conflicted and she doesn’t know how to deal with it. When he announces his wedding she is sure that he is making the worst decision ever but is this because she just cares for him as a partner in a professional sense or is there something more?

As a character, Jess is complex, her secrets haunt her every single day and she lives in fear of them becoming public. We are told her story in a series of flashbacks and only then do we realise what drives Jess to behave the way that she does. She has a fear of becoming close to anyone, she does not want that intimacy a relationship would bring and to her sex is just a means of numbing herself to the pain. In “Now You See Me” her defences are shaken as she is introduced to Matt, could he be the one to make her change her mind? Don’t let all this emotional stuff put you off and make you be thinking that this is just some bodice-busting steamy read – oh, no way is it that – this is a burrowed right inside your head and screw your mind up kind of read; the psychological delving will satisfy the most inquisitive of readers believe me.

Jess, quietly focused, doesn’t do small talk and is prepared to act the “dumb girlie” to get what she needs but don’t be fooled by this act, she can cut you to shreds in seconds if required. Her whole wellbeing is thrown into chaos in this investigation though, as it becomes clear to her that there is a link to her past and this makes for dark and disturbing reading!

Jamison, well here comes a new character crush that’s for sure! Remember I said Criminal Minds, well I think I just found myself a  fictional Morgan! Be still my beating heart! This is a man with a past, a man who has just come back from an undercover assignment and seen and done some dark deeds. Just how much has it affected him and how much of his past is he willing to share with anyone other than Jess?

Agent Chan was partnered with Jess while Jamison was on undercover duty. He is a bit of a ladies man and rather shallow it has to be said but watch out for his interview skills, this man is a showman and he might be a bit of an ass at times but the scene where he is interviewing one of the suspects is on point!

And a mention has to go to Tina, a white collar worker in the FBI she has just been transferred to Jess’ team; she is the IT whizz kid and someone that Jess connects with; she had to be my Penelope in the book! She is one person that Jess could see a friendship developing with and I’m looking forward to seeing where this goes as the series develops.

Now obviously as well as exceptional characters, Now You See Me also has an ingenious plot. It is dark, it is disturbing and without giving any spoilers away it will keep you engrossed right until the very end! So many twists, turns and red herrings that you are going to be twisted like a corkscrew by the time you put this book down! It gives you secrets and lies and dysfunctional families and relationships that are taken to a whole new level beyond Jeremy Kyle or Jerry Springer level! These guys are off the wall dysfunctional!

If you like your serial killers twisted, your relationships screwed up and a read that will have you gripped to the point your skin wrinkles in the bath as you cannot get out until you finish the book then “Now You See Me” is one for you! A read that will pick away at your brains and leave you reeling! Do not miss it!

“Now You See It” is available for purchase from 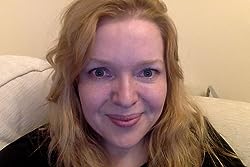 Originally from California, Kierney Scott lives in Edinburgh, Scotland with her husband and their daughter.

In her spare time she likes to read and invent new recipes. Her stuffed peppers are particularly popular with her family, as are her grain-free chocolate chip cookies. In an effort to convert her family to the joys of pumpkin, she created the Great Pumpkin Challenge. For the ten weeks before Thanksgiving, they tried a new pumpkin recipe every week. Pumpkin arancini and pumpkin queso were a big hit. She has promised her daughter to never again roast pumpkin and call them chips.