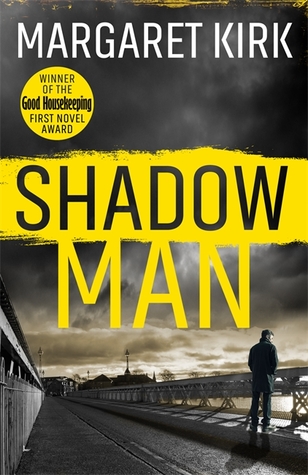 I’ve had this sitting on my #TBR since I was lucky enough to receive an ARC at Harrogate earlier this year. It was a perfect read over the festive period and I’m delighted to share my review here today.

The body of the queen of daytime TV, Morven Murray is discovered by her sister, Anna, on the morning of her wedding day. But does Anna know more about the murder than she’s letting on?

Police informant Kevin Ramsay’s murder looks like a gangland-style execution. But what could he have stumbled into that was dangerous enough to get him violently killed?

Mahler has only a couple of weeks to solve both cases while dealing with his mother’s fragile mental health. But caught in a deadly game of cat and mouse, is ex-Met DI Lukas Mahler hunting one killer, or two?

Set against the backdrop of the Independence Referendum in 2014, Shadow Man is an intriguing and enigmatic debut from Margaret Kirk and introduces us to a new Scottish DI, Lukas Mahler and a new name in Scottish Crime Fiction that you need to look out for!

Right away DI Lukas Mahler engaged me. This debut gives us plenty of clues as to his difficulties in both his personal and professional relationships but left me wanting to find out more about this man. He is originally from Inverness but left to go to England as a child where it would appear he grew up. He served in the Met before taking a transfer back to the Highlands to allow him to be closer to his mum. His mum, Gracie, lives with poor mental health and while we get a couple of hints as to what happened to her, there is definitely more of a story there waiting to be told. Her vulnerability and Mahler’s guilt combine to provide a realistic picture of a relationship that has been damaged somewhere along the line. I really hope that there is a next in the series!

Inverness may be a relatively large city in the Highlands but the novel also highlights the very real difficulties faced by Mahler who finds some of his team are resentful of his position. The whole concept of outsiders fitting into a tightknit community is realistically portrayed throughout.

We are introduced to a whole host of characters but two who stood out for me were, Anna Murray, the sister of Morven and DS Iain Fergie. Anna did not have a close relationship with her sister and she finds herself under suspicion but I could not help feeling sorry for her. It seemed that she lived very much in the shadow of Morven and the rift between the two sisters had not shown any signs of healing in the run-up to the wedding. Their mother also appeared to have favoured Morven and it was difficult not to put myself in Anna’s shoes as she struggled to deal with her grief, caring for her parents and dealing with her mother’s dismissal of her. DS Fergie provided a breath of humour to the proceedings, his somewhat haphazard ways and his absolutely filthy Audi were a source of despair to Mahler but it was obvious that both characters gelled and the follow up to the Shadow Man will no doubt see this develop further.

Shadow Man opens with a violent death in Glasgow in 1994 before introducing us to Mahler who is returning to Inverness from a friend’s funeral in London. He has no sooner touched down than he is faced with two brutal murders to investigate; the murder of police informant Kevin Ramsay and that of media darling Morven Murray. What follows is a fantastic cat and mouse game with a river full of red herrings that kept me guessing and second guessing all the way through. The novel is also peppered throughout with fascinating snippets of the history around the Highland Clearances and while it might sound peculiar, it worked perfectly well and gave the novel just that something a little bit different, there was a real sense of “cosy crime” set in modern day times and the political backdrop combined with the breathless beauty of the Scottish Highlands resulted in a taut and atmospheric police procedural beautifully written by the author.

An excellent debut which promises a great series ahead for lovers of Scottish Crime Fiction.

Shadow Man can be purchased from: