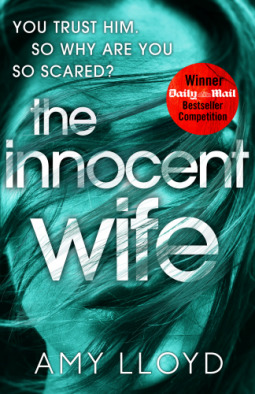 I’m delighted to be closing down the blog tour for Amy Lloyd’s “The Innocent Wife”. Thank you to Anne of randomthingsthroughmyletterbox and Penguin Random House for the ARC to review. Since I read this, I’ve been banging on about it so much, so I am delighted to finally be able to share my thoughts!

Before I share my thoughts here’s what the blurb says:

A young schoolteacher falls for a man on Death Row whom she believes is falsely accused, only to begin wondering after their marriage – and his release.

Twenty years ago Dennis Danson was arrested for the brutal murder of Holly Michaels in Florida’s Red River County. Now he’s the subject of a Making a Murderer-style true crime documentary that’s taking the world by storm – the filmmakers are whipping up a frenzy of coverage to uncover the truth and free the victim of a gross miscarriage of justice.

Samantha may be thousands of miles away in Britain, but she is as invested in Dennis’s case as any of his lawyers. Perhaps even more so, as her letters to the convicted killer grow ever more intimate. Soon she is leaving her life behind to marry Danson and campaign, as his wife, for his release.

But when the campaign is successful, and Dennis is freed, events begin to suggest that he may not be so innocent after all. How many girls went missing in Red River, and what does Dennis really know?

Every now and again you pick up a book and it just grabs you and sucks you right in! The Innocent Wife was one of those books, the very premise of the novel captured my imagination right away:  a man on death row in America, a British woman obsessed with his case, a woman who up sticks and gives up everything to move to the US to become his wife and fight his case. When he is freed, they all live happily ever after, right? Eh, that will be a big fat NO! As soon as Dennis is released I could almost feel the anxiety and tension in Sam rise, was this the life she had planned for and was she really safe living with her new husband?

The Innocent Wife is a fantastic exploration of the phenomenon of women who fall in love with prisoners on death row? What on earth possesses a woman to commit to a man who is unlikely to see the outside world again and what actually happens in a relationship when the unthinkable happens and the prisoner is released? How does being incarcerated for over 20 years impact on a person, can they really fit neatly back into the world they left behind? And what happens when you start to have doubts about the prisoner you fell in love with when the shackles are broken? All these questions and more are considered throughout this novel resulting in a compelling read that will prod and poke at your brain cells and has you questioning yourself and your beliefs as you read on.

Watching Sam and Dennis “fall in love” from the safety of glass screen to the courtroom scenes where he is freed was like watching the life that Sam had created inside of her head slowly unravelling in front of her eyes. It was kind of hard to feel sorry for her when all I wanted to do was give her a shake and tell her to take the blinkers off and look a bit more closely at reality. Yet, I know that these relationships happen and the reasons behind them are varied and complex. It was clear that Sam was not a happy woman, she had few friends, a poor self-image and longstanding issues with relationships and so perhaps the “safety” of her relationship with Dennis was what she fell in love with rather than the actual relationship with him.

Dennis was a strange character, I swung from feeling sorry for him being thrown into a world which had changed beyond all recognition from when he was incarcerated, to be thrown like scraps to the media pack that bayed for his story and his blood to be deeply suspicious about his innocence. So many little hints are thrown into the mix that left me wondering all the way through the book.

Dennis only seemed to trust Carrie, the documentary maker who had campaigned tirelessly for his freedom since the beginning but was her trust in him about to be shattered? And what of his childhood friends, Lorraine and Howard, how much trust really lay between them and just who can Sam trust, if anyone?

The Innocent Wife is a tense and compelling exploration of relationships, emotions and the human psyche, it is a dark psychological thriller that felt real to read, I actually felt as though I were reading about a real case reading this novel. Gripping and heart-stopping at times, this is a novel that you could easily pick up and read in one sitting!

The Innocent Wife is available to purchase from: