Join three relatively new names on the Glasgow crime writing scene as they discuss their novels. Bloody January by Alan Parks brings to life the dark underbelly of 1970s Glasgow and introduces a dark and electrifying new voice in Scottish noir, in A Murder Of Crows by Ian Skewis DCI Jack Russell is flung headlong into a race against time to prevent the evolution of a serial killer and The Ghost of Helen Addison by Charles E. McGarry, sees private detective, avowed gourmet and wine connoisseur, Leo Moran drawn into the investigation of the ritualistic murder of a young woman in rural Argyll

So my final day at Aye Write and the first panel of the day for me was The Glasgow Crime Boys and a packed audience had turned out to see them.

Chaired by Martin Greig this was a debut author panel of three very different authors. Starting with the background of the authors we heard how Ian Skewis’ idea for Murder of Crows goes back to the 1970s when he and his parents found the body of a man hanging from a tree in the woods in Dunbarton! For Charles McGarry he initially started off writing a screenplay which he then turned into his novel, The Ghost of Helen Addison co-written with Martin Greig. His idea of a crime novel was born from a story in which a psychic had predicted Pearl Harbour and so Leo Moran was created. Alan Parks initially wanted to write a social history of Glasgow but realised he wasn’t qualified to do so! He then came up with the idea of a detective investigating a murder which married the idea of the division of social class in the city and so Bloody January was written. 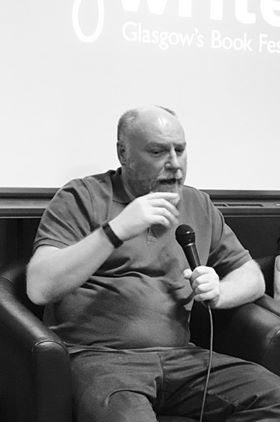 The three authors reflected on their plotting process which Ian described as hell, though his novel evolved over a number of years and so he didn’t feel overly pressured by it. Charles felt intimidated by the whole whodunnit and didn’t want to use his detective’s psychic abilities as a shortcut so his was an intricate process involving spreadsheets. Alan’s process was much more fluid with the places inspiring the plots with events taking place at the time his book was set developing the plot.

Going onto settings Alan’s Book is set in Glasgow in the 1970s, not the prettiest time for the Dear Green Place, a real contrast between poverty and wealth, a rich social history lending itself to his novel. Charles’ protagonist lives a salubrious lifestyle in the West End of Glasgow, an almost timeless area in which, Leo, a man of contrast and conflict finds himself as an old-fashioned type of detective. Ian’ Murder of Crows is very much an urban/rural divide where Glasgow is the save haven from the madness of the countryside. 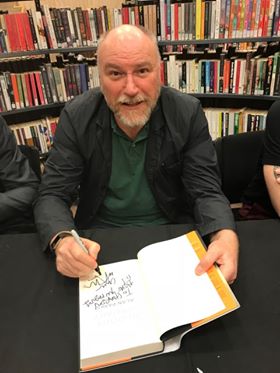 Tomorrow is the last day of Aye Write, click below to catch what’s on: