This is a story about a city. As with all others, it’s a place of violence. There are murderers, and they live among us.

This is also a tale about a couple — sometimes friends, occasionally lovers, but always partners. Dan and Olivia are fighting modern battles; the ones parents have over a lack of money, time or peace.

An escalating serial killer terrifies the streets and homes. The body count rises as their relationship crumbles. Society reveals its dark side, and no one is safe. Dan and Olivia experience this first-hand as danger closes in.

Will Abel’s reign of terror ever end?

Who will live and who will die?

Abel’s Revenge is a tale of an ordinary couple living an ordinary life. Neither of them seem particularly happy in their relationship but neither of them seem to be able to find a way out of the hole they seem to have dug themselves into. Meanwhile the city is subject to the terrifying presence of a serial killer and the killer is about to make a huge impact on their lives.

OK this was a surreal one but not in a bad way just in a very strange way! Ross Greenwood has a brilliant knack of writing strong character focused novels and Abel’s revenge is no different in this respect. Ross has created a cast of extremely well written characters.

Dan and Olivia are struggling in their relationship, parenthood and career stresses have eroded any depth of feeling that they have for each other and their lives seem to have become a never-ending series of petty squabbles. As a reader I found myself sucked into the apathy that was their relationship and it often felt as though I was carrying their burdens as I read. However, and I don’t know if the author intended this, at times I was absolutely howling with laughter at their behaviour; some of the one liners are class! A realistic portrayal of how people’s lives can quickly fall into a rut.

Abel, now we know right from the beginning that he is the serial killer terrorising the city. We know his name but we don’t know who he is.We are told from the start of the book about the issues he faced as a child and we are led to ponder over the idea of nature V nurture, especially when the advice given to him by his father is to ensure that he keeps himself hidden and not get caught doing the things that he does. He really is the most revolting individual, a sociopath or a psychopath, it is difficult to tell but you certainly wouldn’t want to be meeting him on a dark night by yourself! Yet at times there is something about him that makes you wonder if there is another side to Abel.

The city is under attack with crime rates soaring, it isn’t clear if Abel is responsible for them all or if he has acted as an inspiration to others. At times it became unclear if Abel was actually real or a representation of the sickness in society. The police play a very minor part in this novel, it is not a police procedural, it’s not about the good guys catching the bad guys; it’s more of an exploration into the darker side of human nature.

The book is written from Dan and Olivia’ point of view interspersed with narrative from Abel and random characters he has chosen as victims. Other characters were very much on the periphery and as such I never really felt much connection with the other characters in the book as this was more a story of Dan, Olivia and Abel.

I don’t know that I would categorise Ross Greenwood’s books in the genre of thriller, there is something quite different about them. Reading Abel’s Revenge was almost like an opportunity to identify with the main characters, Dan and Olivia, yet at the same time being taken on a rollercoaster ride of a read way outside of your normal everyday experiences. Domestic Noir with a twist, dark psychological read? I’m not sure but it is certainly a twisted and disturbing read altogether!

If you are looking for a straightforward psychological thriller/good guys catch bad guys type of read this one is probably not for you. If, however, you are looking for an exploration into the depths of human nature where the darkness of the mind combined with a dark sense of humour then I think you might like this one.

Abel’s Revenge is available to purchase from: 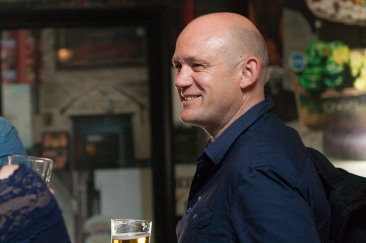 Ross Greenwood was born in 1973 in Peterborough and lived there until he was 20, attending The King’s School in the city. He then began a rather nomadic existence, living and working all over the country and various parts of the world.

Ross found himself returning to Peterborough many times over the years, usually, so he says “when things had gone wrong.” It was on one of these occasions that he met his partner about 100 metres from his back door whilst walking a dog. Two children swiftly followed. And, according to Ross, he is “still a little stunned by the pace of it now.”

Lazy Blood book was started a long time ago but parenthood and then four years as a prison officer got in the way. Ironically it was the four a.m. feed which gave the author the opportunity to finish the book as unable to get back to sleep he completed it in the early morning hours.

Ross Greenwood’s second book, The Boy Inside, was picked up by Bloodhound Books, and in September 2017, Fifty Years of Fear was published. All his books are thought-provoking, and told with a sense of humour.

Ross Greenwood hopes you enjoy reading them.
Please feel free to get in touch on http://www.rossgreenwoodauthor.com

Other Books by Ross Greenwood