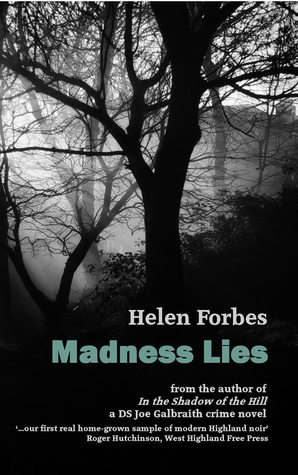 I was invited by the author to read and review this book and thanks goes to Helen Forbes for the review copy.

When an Inverness Councillor is murdered in broad daylight in the middle of town, Detective Sergeant Joe Galbraith sees a familiar figure running from the scene.

According to everyone who knows him, the Councillor had no enemies, but someone clearly wanted him dead.

The victim’s high profile means the police want a quick resolution to the case, but no one seems to know anything. Or if they do, they’re not prepared to say.

This second novel of Highland Noir from Helen Forbes continues the series with a crime thriller that moves between Inverness, North Uist and London, reaching a terrifying denouement at the notorious Black Rock Gorge.

Madness Lies has it all; murder, drugs, mental health, prostitution and dysfunctional relationships it provides a sharp and dark journey into the underbelly of the North East of Scotland taking us from Inverness, North Uist and London before a chilling climax at Black Rock Gorge which featured in Harry Potter, The Goblet of Fire.

I hadn’t read the first novel and while the storyline works as a stand-alone there would definitely be a benefit to having that back story to the characters to add the meat to the story. I think I struggled to get into it a little at the beginning because I hadn’t read the first one but that soon passed and I settled into what turned out to be a fast paced, enthralling and brilliantly authentic journey around Inverness. What a fabulous sense of place Helen Forbes has created in this novel.

I don’t know the history behind DS Joe Galbraith and his colleague DC Jimmy Jackson but I do know that Jackson was one of those characters that I’d never tire of slapping what an odious little man!

The MacRae family featured heavily in the novel and I have to say that my heart broke for them. Sharon MacRae has been through the mill in her life  but seems to have turned her life round since meeting this new guy, Chris.  But is he all he seems and just how is he connected to the stuff that her son Ryan has got himself mixed up in? Aw Ryan, I just wanted to reach out and give him a massive hug, that “scheme boy” conflict was clear as day with this character as he struggled between portraying that “hard man” image expected of him and the boy who just wanted a big cuddle from his mammy. The family find themselves embroiled in situations and with some very dangerous individuals and my heart was in my mouth as the story unfolded before me.

Madness Lies was full of twists, shocks and heart-rending moments as I got completely caught up in the lives of the characters and the streets of the locations. Helen Forbes has created a cracker of a read here and she is certainly a name that I will be looking out for in Scottish Crime Fiction

Madness Lies is available to purchase from: