Gotta love a #CoverReveal here at Chapterinmylife. Especially when it is for one of my favourite Scottish crime writers! Then I get all overcome with excitement as I cannot wait to share it all with you!

But you know the game folks! No giving it away for too easily! Nope, I like to tamtalise and tease you a little first! #MyBad!

Anyway today it gives me great pleasure along with two of my favourite blogging #partnersincrime, Noelle over at Crimebookjunkie and Gordon over at Grabthisbook to be sharing the cover from the latest novel from the one and only, the most talented and brilliant writer, Mr Douglas Skelton! The Janus Run. Published by Contraband this cracking new novel is due out in September 2018!

So what is The Janus Run all about then?

Here’s what the official blurb says:

‘A bullet doesn’t know good from evil, right from wrong. A bullet only knows how to kill. I was a bullet…’

For Cole Lang, the past was buried. A successful advertising executive, he has put one horrific marriage behind him but ahead was a new life with corporate lawyer Gina Scolari.

But then someone murders Gina. In his bed.

They thought he was just a white collar pushover but they were wrong. He has secrets.

Gina had secrets, too, and one of them may have got her killed.

Was it because of her father, Tony Falcone, a former Mafioso who turned rat?

Or was it something else? Something from Cole’s past, from his days with Janus, a group so shadowy only those in the highest echelons of government know of its existence.

In the frame and on the run from the dogged cop Rosie Santoro and US Marshal TP McDonough, Cole must tap into old skill in order to survive.

But those old skills are rusty and that could prove lethal.

He forges an uneasy alliance with Falcone, who seeks revenge for his daughter’s death.

Falcone has baggage of his own, mistakes in his past he must address if they are to survive. Not the least is the Marino family, out for blood.

They have the law, the feds and the mob on their tail as they dodge bullets and bodies across the Five Boroughs.

Meanwhile, someone else is tying off loose ends. Is it Nicky ‘The Juke’ Bruno, the Marino’s cold-hearted enforcer? Or is the chilling professional killer Mister Jinks responsible?

And all the while, Janus watches and waits.

OMG! And we need to wait until September to read this!!! Who’s up for a bit of kidnapping before then and doling out some blogger torture until that Mr Skelton coughs…

Who is the man behind The Janus Run? 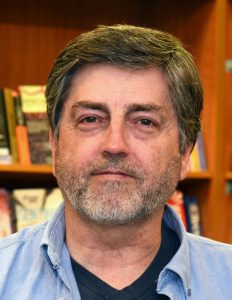 Douglas has been a bank clerk, tax officer, taxi driver (for two days), wine waiter (for two hours), journalist and investigator. He has written 11 true crime and Scottish criminal history books but now is concentrating on fiction. Doesn’t mean he won’t, some day, come up with another factual piece – there are a couple of old cases he’d love to get into – but for now he’s making stuff up.

He’s been on the telly often, which, he says, is a scary experience but more so for the viewer!

Buy his books on:

I guess it is almost time….

What about a little drum roll first….

Oh la la! I love it! That blurb, that cover, what a perfect match! I really don’t like wishing my life away but oh how I wish it was September already!