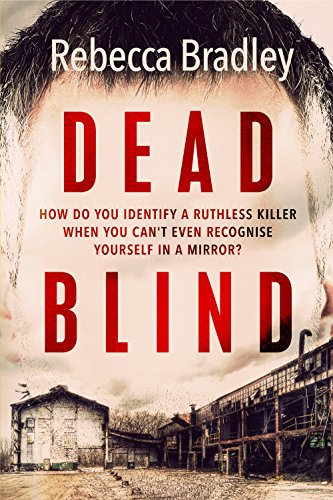 I was delighted when Rebecca Bradley contacted me and asked me to review her latest novel, “Dead Blind”. Dead Blind will be published on 8th May 2018

Before I share my thoughts here is what the official blurb says:

How do you identify a ruthless killer when you can’t even recognise your own face in a mirror?

As Ray deceives his team he is pulled into a police operation that targets an international trade in human organs. And when he attempts to bring the organisation down, Ray is witness to a savage murder.

But it’s a killer he will never remember.

The pressure mounts as Ray attempts to keep his secret and solve the case alone. With only his ex-wife as a confidant he feels progressively isolated.

Can he escape with his career and his life intact?

Dead Blind is a riveting standalone thriller. If you like your detectives flawed and human, and your plot taut, then you’ll love Rebecca Bradley’s nail-biting, hold-your-breath read.

Imagine waking up from an accident and not recognising anyone? That is exactly what happens to DI Ray Patrick following an incident at work which left him and his colleague in hospital.  Six months later her returns to work, his physical scars may have healed but he is left with one injury that he is not prepared to come clean about. Others may not see this injury but if found out, Ray could lose his job and his reason for living. Ray has been diagnosed with Face Blindness, the inability to recognise faces!

Ray wrestled with his decision to return to work, he knew that his ability to do his job would be compromised by the fact he was unable to recognise faces but he reckoned that with a supervisory role and very little front line policing he could manage to pull it off. And perhaps he might have been able to do so, had he not been called to take part in a major investigation into the murky world of human organ trafficking. Just what impact will Ray’s condition have on the investigation and indeed on the lives of others?

“Dead Blind”  was a terrifying journey into the dark web, the murky world of organ trafficking, the lengths people will go to obtain a transplant and reasons which lead others to sell them on the black market. It was terrifyingly authentic and my heart was racing throughout as we are taken on a heart pounding and chilling race against time to bring the culprits to justice. The plot was fast-paced and energetic, it kept me gripped throughout and compelled me to read faster!

I found the whole concept of face blindness fascinating and especially the tools that Ray used to see him through each day,  as he works on markers to recognise his colleagues and to prevent suspicion. I felt the strain and pressure that he was under. I did, however, feel a little annoyed at his selfishness for putting others at risk simply to allow him to do his job. Yet, it was not difficult to understand why he took this route, his job was his reason for being and he could not imagine his life without it. His relationships with others were also put at risk, his over-reliance on his ex-wife Helen put his new relationship with Celeste at risk. Helen is the only one who knows about his condition. It was difficult not to feel frustrated at Ray as he kept it all to himself, I wanted to shake him and say “For God sake man, tell someone” but then that wouldn’t have been much of a storyline would it! Others do realise that there is something not quite right with Ray and the question is will he open up before he is found out? You will just need to read it and find out for yourself!

“Dead Blind” is an innovative and taut standalone from Rebecca Bradley, it is one that will keep you glued to the pages and play with your mind as you ponder the rights and wrongs of DI Ray Patrick’s actions!

“Dead Blind” is available to purchase from: