Thanks to Sarah at Bloodhound Books for inviting me to be a part of the Blog Tour for Tony Forder’s latest Bliss and Chandler novel. I absolutely love this series!

When a torched body is found in a country lane, DI Bliss and Chandler are called in to investigate.

The detectives are drawn towards recent missing person reports, and believe their victim will prove to be one of them. Bliss thinks he knows which, and fears the outcome if he is proven right.

Soon the body is identified, and Bliss and Chandler discover evidence suggesting this murder might be a terrorist attack.

Meanwhile, someone from Bliss’s past needs his help, and soon he is juggling his personal life with the demanding case. To make matters more complicated, MI5 and the Counter-Terrorist Unit are called in to help solve the case. But are they on the right track?

Bliss and Chandler soon find themselves in a race against time, and this might just be their most challenging case yet…

Once again Tony Forder nails it with this winning duo, Bliss and Chandler, these two detectives are made to work together and just their names alone make them worthy of a TV series, add in the superb plot lines and you have yourself a winner!

Anyway “If Fear Wins” is a cracking read that picks away and explores at a number of issues which is what makes this series more than “just” a police procedural. Resources, politics and racism are all thrown into the mix resulting in a novel that will result in paper cuts to your fingers as you will be turning the pages so fast!

Racial and political tensions are explored with a brutal, but frank honesty and the pressure really builds up as a sensitive approach is required to lead the investigation without causing further unrest in the community. Throw into the mix, an old face from Bliss’s past and this plot just gets even more intriguing!

I love Bliss, he’s old school in his heart and constantly battling internally with new ways of policing and the politics involved. He has good strong banter with his team and is a solid leader but definitely not a character that makes for a dull reading experience. His wee spark and indeed his flaws give off an intrigue that is both engaging and compelling. He and Chandler gel together so well. Bliss might be her superior but there is a real sense of equity in the relationship and she is not afraid to challenge him where she thinks he is in the wrong. There is still a bit of an emotional dance going on between the two of them, a real “will they/won’t they” feeling.

A cracking police procedural with well crafted plots, superb character development and a real feeling of being caught up in the lives of the characters as well as in the investigation. “If Fear Wins” is another outstanding installment in the Bliss and Chandler series and not to be missed!

If Fear Wins is available to purchase from: 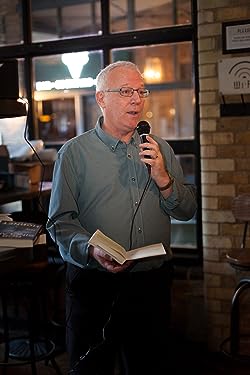 Tony J Forder is the author of the critically acclaimed crime thriller series featuring detectives Jimmy Bliss and Penny Chandler. The first two books, Bad to the Bone and The Scent of Guilt, will be joined in the series on 29 May 2018 by If Fear Wins.

Tony’s dark, psychological crime thriller, Degrees of Darkness, featuring ex-detective Frank Rogers, was also published by Bloodhound Books. This was intended to be a stand-alone novel, but Tony is now considering the possibility of a follow-up.

One book that will definitely see a sequel is Scream Blue Murder. This was published in November 2017, and received praise from many, including fellow authors Mason Cross, Matt Hilton and Anita Waller. The second book in this new series is Cold Winter Sun.

Tony lives with his wife in Peterborough, UK.