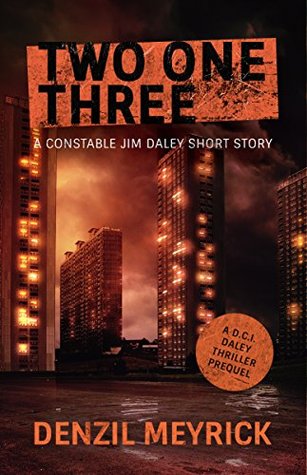 I’ve decided to have myself a little Denzil Meyrick binge! I’ve a couple of his books downloaded on kindle already but thought I’d kickstart my binge with this cracking little novella #TwoOneThree

Glasgow, 1986. Only a few months into his new job, Constable Jim Daley is walking the beat. When he is called to investigate a break-in, he finds a young woman lying dead in her squalid flat. But how and why did she die? In a race against time, Daley is seconded to the CID to help catch a serial killer, under the guidance of his new friend DC Brian Scott. But the police are not the only ones looking for the killer . . . Jim Daley tackles his first serious crime on the mean streets of Glasgow, in an investigation that will change his life for ever. This is a stunning eBook only prequel to Denzil Meyrick’s critically acclaimed, best-selling DCI Jim Daley series.

Well my first thought was, hell woman you are a Scottish Crime Fiction fanatic, so why haven’t you even started this series yet!

Two One Three is a short sharp piece of writing introducing PC Jim Daley fresh out of Tulliallan (The Scottish Police Training College) and straight onto the streets of Glasgow in the midst of the 1980s. In an era before Police Scotland and before the introduction of political correctness this novella packs one hell of a punch into its 73 jam-packed pages!

We are introduced to Jim Daley as a new recruit who has been asked to help out in CID; the misogynistic attitudes so prevalent in this time were evident in the writing and it is so hard to believe that this happened within my lifetime! Daley shows promise as a young man who is part of a new breed of recruit; one who can see victims as people and takes some time to understand why people might live a certain lifestyle.

Much to his sergeant’s disgust, Jim Daley is roped into helping CID investigate the series of murders of women working as prostitutes. He quickly proves his worth as he becomes a key player in the investigation. Cleverly plotted with some gritty dialogue and excellent twists, this novella was tighter than a drum. It proved a brilliant introduction to a series that I am looking to get my teeth into!

Two One Three is available to purchase from: