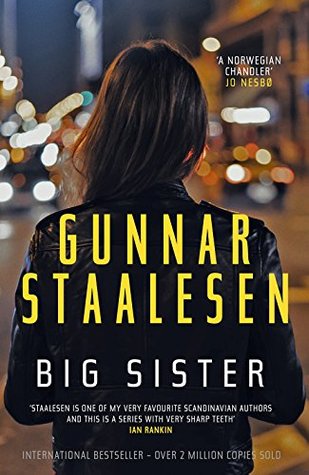 Powerless to resist an #OrendaBook and I am delighted to be a part of the #BlogTour for  Gunnar Staalesen’s #BigSister. Huge thanks to Anne over at randomthingsthroughmyletterbox for the invite to take part and to Orenda Books for the ARC for review.

Varg Veum receives a surprise visit in his office. A woman introduces herself as his half-sister, and she has a job for him. Her god-daughter, a 19-year-old trainee nurse from Haugesund, moved from her bedsit in Bergen two weeks ago. Since then no one has heard anything from her. She didn’t leave an address. She doesn’t answer her phone. And the police refuse to take her case seriously.
Veum’s investigation uncovers a series of carefully covered-up crimes and pent-up hatreds, and the trail leads to a gang of extreme bikers on the hunt for a group of people whose dark deeds are hidden by the anonymity of the Internet. And then things get personal…
Chilling, shocking and exceptionally gripping, Big Sister reaffirms Gunnar Staalesen as one of the world’s foremost thriller writers.

I am having to rest a little before picking up my next read as “Big Sister” from Gunnar Staalesen has just reduced me to a quivering wreck if I am honest! Beautifully translated by Don Bartlett, it is a dark and atmospheric race to find missing student Emma, who is god-daughter to Varg Veum’s half-sister, a woman who has just turned up announcing her relationship to him. This sets the scene for a story steeped in secrets, darkness, mystery and heartbreak.

There was something inherently vulnerable about this novel. As I watched secrets from the past being slowly revealed it was almost like I was picking away at the “scabs” of the characters, each revelation bringing something new and something heartbreaking to the table.

Veum’s dry sense of humour and outer strength belies the sensitive nature of the man, there is something about him that compels me as a reader to want to engage and reach out to him. He is a very driven character and lets nothing stand in his way. In “Big Sister” he is forced to face a number of secrets that have a huge impact on who he is as a man and it was an outstanding exploration of his character by the author.

“Big Sister” is a chilling read, there is a real sense of foreboding and darkness from the outset, which continues to work its way under your skin, probing and poking at your brain. The novel explores the impact of secrets and lies on families as well as looking at an online world that preys on the vulnerabilities of others. At times it is not an easy read but such is the expertise of the author it never plunges you into the very depths of despair and Veum’s character always manages to bring a little light to the darkness.As his investigation progressed I had a real sense of fear, racing heartbeats and quickening pulse meant I was glued to the pages. The author builds up the powerful suspense with an expertise that is astounding, complex plotting perfectly paced provides a terrifying Nordic Noir journey.

Big Sister is available to purchase from:

check out what the other bloggers have been saying:

Gunnar Staalesen was born in Bergen, Norway in 1947. He made his debut at the age of 22 with Seasons of Innocence and in 1977 he published the first book in the Varg Veum series. He is the author of over 20 titles, which have been published in 24 countries and sold over four million copies. Twelve film adaptations of his Varg Veum crime novels have appeared since 2007, starring the popular Norwegian actor Trond Epsen Seim. Staalesen, who has won three Golden Pistols (including the Prize of Honour), lives in Bergen with his wife. When Prince Charles visited Bergen, Staalesen was appointed his official tour guide. There is a life-sized statue of Varg Veum in the centre of Bergen, and a host of Varg Veum memorabilia for sale. We Shall Inherit the Wind and Where Roses Never Die were both international bestsellers.