Thanks to my lovely sister for taking me and picking me up, me and the broken bones were able to make the Glasgow launch of Liam McIlvanney’s latest novel, The Quaker tonight!

Taking place in Waterstones, Sauchiehall Street, I was glad of the in-store lift to get me to the top floor for the event. Folks, if you haven’t been along to the new event space at the Sauchiehall St. branch then you really should get yourself along! Cracking venue with a licensed bar and restaurant…bookshop, food, drink…what more could you ask for!

Glasgow Fair Monday saw a good size turn out for the event with Michael J Malone in the chair. The cover in the backdrop above is actually the Canadian cover and I have to say that I love this one big time!

Liam talked about his fascination with the Bible John case as he was growing up. Although he was only a baby when the murders took place, the case has been a longstanding feature of most Scottish newspapers over the years and that identikit picture of Bible John is something we probably all recognise. It was this fascination that led him to write The Quaker. Originally he was going to base it on fact but felt a little morally queasy about doing so when the families of the victims were still living. He does give the female victims a voice in the novel through chapters narrated from their POV. It was one of these chapters that he gave a reading from and it was extremely poignant to listen to.

Michael asked what it was about cases like Bible John that fascinates the public and while Liam didn’t claim to be an expert on the area he did think that fiction and film provide us with a safe place to explore events and the crimes that repulse us.

The main character in the novel is Detective Duncan McCormack and Liam certainly put this character up a tree and threw some pretty weighty branches at him! He is from the Highlands, he is gay and a Catholic, all pretty tough going for a detective in Glasgow in the late 1960s when homosexuality was still a crime. For those who have read and loved the book, you will be pleased to know that Liam is currently writing the sequel! Although Liam cautioned that he sees himself as a slow-motion crime writer and not in the league of writing a book a year but rather one every 4 years.

When Michael asked Liam about the recent comments made by Howard Jacobson recently who declared that falling sales of literary fiction was not the fact that the novel was dead but rather the fault of modern-day readers who lack the attention span required to enjoy the intellectual challenge of reading. Liam’s response to this was a resounding “Bollocks”!

All too soon the evening was over and it was time for the book signing! I haven’t read The Quaker yet but it is pretty high up my list to be read and I have been hearing some excellent things about it!

Liam will be around at a number of festivals over the next few months in the UK and if you get a chance to hear him talk at an event then I’d urge you to do so! 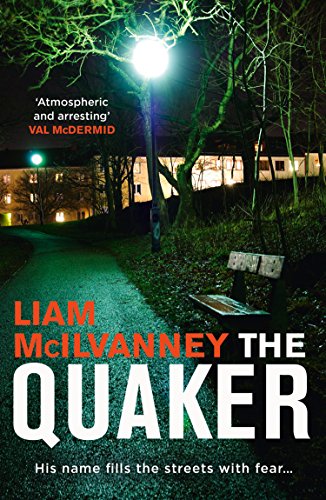 His name fills the streets with fear…

In the chilling new crime novel from award-winning author Liam McIlvanney, a serial killer stalks the streets of Glasgow and DI McCormack follows a trail of secrets to uncover the truth…

A city torn apart.
Glasgow, 1969. In the grip of the worst winter for years, the city is brought to its knees by a killer whose name fills the streets with fear: the Quaker. He takes his next victim – the third woman from the same nightclub – and dumps her in the street like rubbish.

A detective with everything to prove.
The police are left chasing a ghost, with no new leads and no hope of catching their prey. DI McCormack, a talented young detective from the Highlands, is ordered to join the investigation. But his arrival is met with anger from a group of officers on the brink of despair. Soon he learns just how difficult life can be for an outsider.

A killer who hunts in the shadows.
When another woman is found murdered in a tenement flat, it’s clear the case is by no means over. From ruined backstreets to the dark heart of Glasgow, McCormack follows a trail of secrets that will change the city – and his life – forever…

I shall be reading and reviewing my copy soon!

The Quaker is available for purchase from: