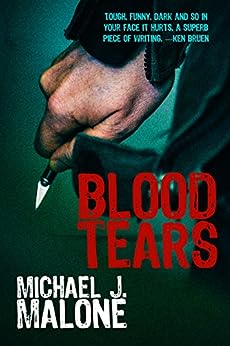 I was delighted when Michael J Malone announced that he was re-releasing #BloodTears, the first in the Ray McBain series. Having previously devoured all of the books in the series, I was champing at the bit to be involved in the #BlogTour for the re-release of this book! I am over the moon to be kicking off this tour today!

The first in a series of books with D.I. Ray McBain – a Glasgow detective who turns to his best friend, Kenny O’Neill when he goes on the run after he becomes the prime suspect in a grisly murder.

An old man is found murdered in his Glasgow flat. DI Ray McBain is called to the scene and is the first to notice that the man’s wounds mirror the Stigmata. The police quickly discover that the victim is a former janitor who worked in several care homes where he abused his charges. Is someone taking revenge thirty years after the fact?

McBain, as a child was a resident of Bethlehem House, a Catholic-run care home where the murdered man worked and early on in the investigation, McBain decides to hide a crucial bit of evidence relating to his stay in the convent orphanage.

When his superiors find out, McBain becomes the prime suspect in the case and has to make a decision which will leave him on the run and alone, trying to solve the murders and, at the same time, the puzzle of his past – a past that is pushing into the present with a recurring suffocating dream of blood and feathers that descends on him every night.

Blood Tears is a dark psychological thriller combined with gritty police procedural resulting in an outstanding introduction to DI Ray McBain, his colleagues and some friendships which sit firmly on the outside of the law!

Blood Tears introduces us to DI Ray McBain – possibly the most dysfunctional detective I have come across but also one who you cannot help being drawn to. As his mind begins to unravel his life follows suit as a brutal murder has links with his childhood in a Catholic monastery. Littered with flashbacks to McBain’s childhood years set in a Catholic orphanage we see his nightmares of the past come tumbling into the present with disastrous consequences for McBain. The subject matter is not an easy read, child abuse, paedophilia and murder are not for the faint-hearted but Malone manages to inject that famous Glaswegian dark humour into the novel providing a good few snorts of laughter along the way! It takes a skilled author to do this and Malone proves that he has got this skill in bucketloads!

Blood Tears sees his career and indeed his life on the line as he goes on the run to find the killer and to clear his own name. Taking us on a breakneck journey from Glasgow, to Ayr and to Manchester, this one will have you hooked right from the start. A #KillerHook prologue drew me in immediately promising intrigue, suspense and a healthy dose of violence. I was not disappointed!

Blood Tears produces a set of strong and well-developed characters and an excellent sense of place; my hometown in brought to life as McBain goes into hiding amongst those who are hunting him!

A whole host of characters are introduced in the novel but the two who stand out most for me are DC Alessandra Rossi and Glasgow “businessman” Kenny O’Neill. Businessman being that well-known euphemism for gangster! And boy what a bad boy he is – and he is that kind of bad boy we all can’t help but loving! McBain and O’Neill have been close since childhood and he is the one that McBain turns to for help when things start to unravel. McBain and O’Neill are my dream team! The detective and the gangster might make an unlikely pairing but Malone makes them work together perfectly. Rossi is fairly new to the Force and she is well able to hold her place in a male-dominated environment; strong and ballsy she is a force to be reckoned with but she too has her own private demons to fight. With such a strong cast of characters, you just know that this series is going to have mileage and then some!

The plot is fast and furious as we are hurtled at 100 miles an hour into the investigation; heart pounding and heart breaking at the same time it was almost impossible to put this one down! That “just one more chapter” easily leads to “hell, let’s just finish the book in one sitting” so be warned, if you pick this up then cancel your plans for the day!

Scottish Crime Fiction has produced some of the country’s best writers and I firmly place Michael J Malone amongst them. This is one series you are not going to want to miss!

Blood Tears is available to purchase from 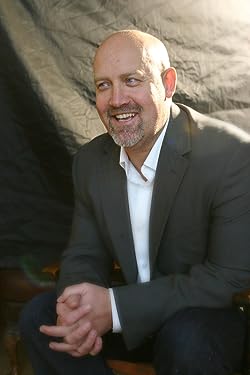 Michael J. Malone was born and brought up in the heart of Burns’ country, just a stone’s throw from the great man’s cottage in Ayr. Well, a stone thrown by a catapult, maybe.

He has published over 200 poems in literary magazines throughout the UK, including New Writing Scotland, Poetry Scotland and Markings. His career as a poet has also included a (very) brief stint as the Poet-In-Residence for an adult gift shop. Don’t ask.