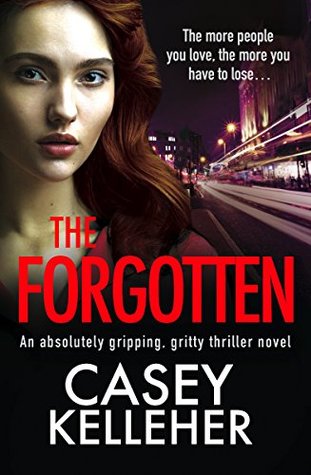 Some of you may know I had a slight accident earlier resulting in a few broken bones and bruises but you know what, every cloud has a silver lining and for me, this is extra reading time! It also meant that I was able to settle myself down and devour the final book of the Nancy Byrne trilogy #TheForgotten. Let’s just say it was worth a few broken bones!

I have to give a big massive thanks to Noelle over at Bookouture for inviting me onto the #BlogBlitz and of course Casey Kelleher for writing such an outstanding trilogy.

The more people you love, the more you have to lose…

Nancy Byrne might be the head of the notorious Byrne crime family, but she’s determined to give her little daughter, Scarlett, the best start possible.

After the death of her beloved father, the notorious gangster Jimmy Byrne, nothing’s stopping Nancy from making money on her own terms – even if she has to combine motherhood with providing for her entire family. But with enemies at their door, she’ll do whatever it takes to protect her loved ones.

But then comes the day when Scarlett goes missing, snatched by a stranger during a trip to the local park, and Nancy’s world is torn apart. Amidst the terror of losing her precious daughter, Nancy is sure of only two things. Someone has taken her daughter … and when she finds them, there’s going to be hell to pay.

Can she find Scarlett – before it’s too late? Or will Nancy’s life of crime come back to haunt her in the worst way possible?

A gritty and hard-hitting thriller packed with shocking twists… Fans of Martina Cole and Kimberly Chambers won’t be able to put this down.

Can you all hear my heart thumping? Because it is just about to burst right out of me after finishing #TheForgotten! And I can tell you this is one trilogy that I will not be forgetting for a long time!

The Forgotten is a journey into the dark and dangerous underworld of the Byrne family. Following the death of Jimmy Byrne, his daughter Nancy has taken over the reigns and she is determined to show the world that being a woman does not mean that you play soft. Oh, no siree, Nancy Byrne is bad and she is dangerous. Cross her if you dare! In The Forgotten, someone tries to cross her by breaking into her new exclusive club and injuring her best friend Bridget in the process. Nancy is not going to let this lie but unbeknown to her there is trouble brewing elsewhere and when her daughter Scarlett goes missing then a distraught Nancy will stop at nothing to get her back.

I bloody love Nancy Byrne, what a character, hard-faced and cold to the core she is determined to make her own way in the world. Plagued by damaged relationships, family secrets and lies the only chink in her armour is her daughter Scarlett. I probably shouldn’t really like Nancy, she makes her living from prostitution and violence but there is something raw about her, something that compels you to root for her all the way through this series. Her relationship with her mother is totally messed up, her brother betrayed her and her father was brutally murdered. She has built a wall around herself and refuses to let anyone through it, Nancy Byrne is not going to let anyone hurt her!

A cast of familiar characters combined with a few new faces provided it’s like a snake pit of gangsters who will stop at nothing to protect their own place in this world. The Forgotten is a dark exploration of underworld life. Characters who you should dislike but find yourself drawn to, it feeds that hunger we have for the dark world of gangster life. Does it glamorise it, hell no, yes they might live in a different world of riches than most of us but you wouldn’t want to be spending every day looking over your shoulder would you? But it also shows the human side of those who inhabit the world, they have hopes, fears and insecurities.

There are so many things I want to say about this book and the characters but to do so might spoil some of the surprise for you all so I will just mention a couple! Nancy’s mother, Colleen and her grandmother, Joannie are still at loggerheads as they compete for the attention of young Scarlett; the underlying feud between the two women is bubbling away and shows no signs of letting up. Michael Byrne is besotted by his great-granddaughter and shows a different side to the womanising man he was before, but can a leopard ever change its spots?

One new face I will mention is Marie Huston, she is a nurse who has become slightly obsessed with one of her patients, Robert Parkes and let’s just say that she reminded me a little of Annie Wilkes of Misery! Where does she fit into this storyline, well you are just going to have to read it and see!

As the final chapter of the trilogy, a few old threads are tied up and issues resolved. Which ones, I hear you ask? Well, that would be telling you wouldn’t it! But it doesn’t give you everything all neatly tied up with a big pink bow! Nope, there are a few shocks, surprises and jaw-dropping moments left to have your head reeling!

Secrets, lies, betrayal, revenge and a whole lot of dysfunctional relationships are tied neatly up into this 300-page perfect package of grit lit and I promise that you will not be disappointed! A brutally honest, raw and realistic novel which will have your heart racing and your jaw dropping! Do yourself a favour and read it! Damn, read the whole trilogy!

You can find my reviews of the first two books by clicking on the links below:

The Forgotten is available to purchase from: 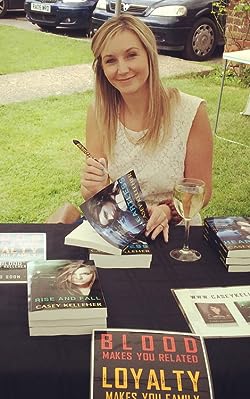 Born in Cuckfield, West Sussex, Casey Kelleher grew up as an avid reader and a huge fan of author Martina Cole.

Whilst working as a beauty therapist and bringing up her three children together with her husband, Casey penned her debut novel Rotten to the Core. Its success meant that she could give up her day job and concentrate on writing full-time.

She has since published
Rise and Fall,
Heartless,
Bad Blood,
The Taken,
The Promise,