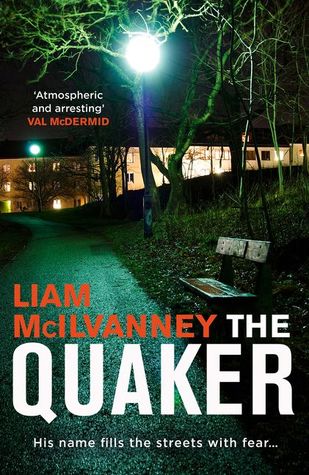 The Quaker by Liam McIlvanney is a recent addition to my bookshelves following the launch of the book at Waterstones in Glasgow last month. I’ve been looking forward to reading it for ages! The Quaker is also on the longlist for the McIlvanney Prize at this year’s Bloody Scotland

His name fills the streets with fear…

In the chilling new crime novel from award-winning author Liam McIlvanney, a serial killer stalks the streets of Glasgow and DI McCormack follows a trail of secrets to uncover the truth…

A city torn apart.
Glasgow, 1969. In the grip of the worst winter for years, the city is brought to its knees by a killer whose name fills the streets with fear: the Quaker. He takes his next victim the third woman from the same nightclub and dumps her in the street like rubbish.

A detective with everything to prove.
The police are left chasing a ghost, with no new leads and no hope of catching their prey. DI McCormack, a talented young detective from the Highlands, is ordered to join the investigation. But his arrival is met with anger from a group of officers on the brink of despair. Soon he learns just how difficult life can be for an outsider.

A killer who hunts in the shadows.
When another woman is found murdered in a tenement flat, it’s clear the case is by no means over. From ruined backstreets to the dark heart of Glasgow, McCormack follows a trail of secrets that will change the city and his life forever

Bringing to life the closes, the backyards and the middens of 1960s Glasgow, Liam McIlvanney easily transports us back to an era of dance halls and murder as The Quaker strikes fear into the heart of ordinary Glaswegian men and women. Based loosely around the Bible John case this novel will strike a chord with not only those who grew up in the era but with those who remain fascinated with the unsolved case.

DI Duncan McCormack has been sent from the Flying Squad to report on the handling of the investigation and to potentially close it down given that The Quaker has stopped his killing spree. He faces hostility from his colleagues in Glasgow, especially DS Goldie who seems to have a special disdain for this softly spoken Inspector from the Highlands.

Running parallel to this is the return to Glasgow of safebreaker Alex Paton. Paton and his gang are involved in an auctioneer heist but he soon finds himself embroiled in the Quaker investigation. The robbery is an investigation more up McCormack’s street as he has a long-standing wish to bring down McGlashan, the man who “runs” Glasgow. The author effortlessly brings the two plots together to a satisfying and authentic resolution.

Each of the Quaker’s victims is given a voice through short chapters narrated at the time of their murder; this was a powerful tool to use especially since the book was set in an era where the female victims were held somewhat responsible for what had happened to them and this redressed the balance of power slightly.

Littered with the bigotry, homophobia and sexism that was the shame of the city in the 1960s policing methods and language left a lot to be desired. McCormack found it increasingly difficult to fit in given he had his own secrets to keep.

The sense of place and time created by the author was second to none, even if you didn’t know Glasgow in the 60s it was impossible not to find yourself transported there as you read, from the darkness of the Necropolis to the dank poverty of the city to the bright lights and exhilaration of The Barrowlands where hundreds went “up the dancin” every week to the fresh openness of the Highlands a picture so authentic was painted before my eyes

The Quaker isn’t a fast-paced wham bam type of read: policing was a lot slower in the 60s and the book reflects this pace but what it does do is give you the chance to slow down and see the characters behind the words, to get a sense of time and of place and to immerse yourself in a story which has fascinated a city for my lifetime. With a cleverly executed plot, a very real sense of place and time and well-developed characters this was an excellent start to what I hope is a whole new series from Liam McIlvanney as I would love to see what happens with McCormack next!

Liam McIlvanney will also be appearing at this year’s Bloody Scotland on Saturday 22nd September. You can purchase tickets for the event here

The Quaker is available to purchase from:

Liam McIlvanney was born in Scotland and studied at the universities of Glasgow and Oxford. He has written for numerous publications, including the London Review of Books, the Times Literary Supplement and the Guardian. His debut, Burns the Radical, won the Saltire First Book Award, and his most recent book, Where the Dead Men Go, won the Ngaio Marsh Award for Best Crime Novel. He is Stuart Professor of Scottish Studies at the University of Otago, New Zealand. He lives in Dunedin with his wife and four sons.