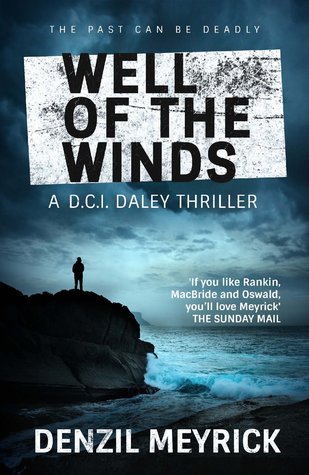 My binge read of Denzil Meyrick’s DCI Daley series has almost come to an end just in time for the publication of his 6th novel (The Relentless Tide out next month) What a whirlwind of a binge it has been; I might have been a bit late to the party but boy have I had a ball since I joined!

As the Second World War nears its end, a man is stabbed to death on the shoreline of Kinloch, in the shadow of the great warships in the harbour.

Many years later, the postman on Gairsay, a tiny island off the coast of Kintyre, discovers that the Bremner family are missing from their farm. There s a pot on the stove and food on the table, but of the Bremners there is no sign.

When DCI Daley comes into possession of a journal written by his wartime predecessor in Kinloch, Inspector William Urquhart, he soon realises that the Isle of Gairsay has many secrets. Assisted by his indomitable deputy, DS Brian Scott, and new boss, Chief Superintendent Carrie Symington, Daley must solve a wartime murder to uncover the shocking events of the past and the present.

Well of the Winds switches effortlessly between 1945 and the present day with the two plots marrying together perfectly and proving once again that Denzil Meyrick is a master of both plotting and characterisation. This combined with a breathtaking sense of place made for a compulsive read in the 5th of the DCI Daley series.

An eerie first chapter sees a farmhouse abandoned like the Marie Celeste on the small island of Gairsay. Daley has taken a short leave of absence to deal with his demons and Brian Scott is standing in for him and he’s delighted to be going on a boat again when he gets the call about the missing family – we all know that boats and Brian Scott don’t have the best relationship!

Brian Scott’s character gets better with each book, his sense of humour is legend and despite the dark subject matters he never fails to make me laugh. His character really comes to the fore in this novel and I enjoyed him taking more of the centre stage. Daley is struggling with the personal events in his life and there was a real sense of gloom surrounding him throughout the book. Chief superintendent Carrie Symington isn’t having an easy time of things and it looks like her past is coming back to haunt her. I really enjoyed the easy relationship that has built up with her and Brian throughout this book and these two characters definitely stole the show for me in this novel!

This series is hailed as a police procedural but Denzil Meyrick manages to keep every book fresh by mixing the recipe up a little adding his own unique twist. And boy does this work; never dull or dreary the series promises something new every time and delivers and more! Well of the Winds is no exception with Special Branch, Secret Agents and Nazi sympathisers this is never a dull read! Past and present collide in what is a taut and excellently plotted tale and another outstanding installment in the DCI Daley series!

Denzil is also appearing at Bloody Scotland this year alongside Quintin Jardine on the 23rd Sept 2018. You can purchase tickets for the event here