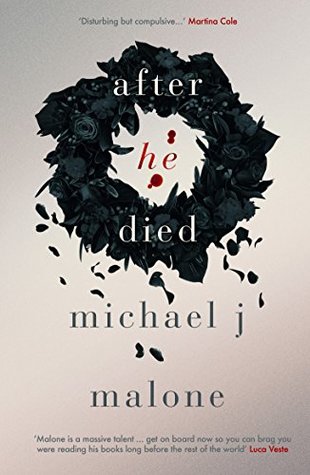 I’m absolutely buzzing to be taking part in the Blog Tour for Michael J Malone’s latest novel to be published by Orenda, “After He Died”. This one holds a special place in my heart as Michael came along to my work to do some research for the character of Cara Connelly. We are all delighted at #TeamCeartas to have Independent Advocacy, and its importance, highlighted in a book written by one of my favourite Scottish Crime Writers! I’m sharing the hosting today with Kate over at The QuietKnitter so go check out her review too!

You need to know who your husband really was…

When Paula Gadd’s husband of almost thirty years dies, just days away from the seventh anniversary of their son, Christopher’s death, her world falls apart. Grieving and bereft, she is stunned when a young woman approaches her at the funeral service and slips something into her pocket. A note suggesting that Paula’s husband was not all that he seemed…
When the two women eventually meet, a series of revelations challenges everything Paula thought they knew, and it becomes immediately clear that both women’s lives are in very real danger.
Both a dark, twisty slice of domestic noir and taut, explosive psychological thriller, After He Died is also a chilling reminder that the people we trust the most can harbour the deadliest secrets…

‘A stark, gripping storyline’ Scots
‘A terrific read … I read it in one sitting’ Martina Cole
‘An expert plotter; twists & turns feel properly embedded in the story. It’s a tough high-wire act, balancing believability with surprise, but the author pulls it off with aplomb’ Doug Johnstone, Big Issue

Kicking off with the grieving widow Paula Gadd greeting mourners at the end of the funeral service for her husband, Thomas. Medicated and hazy she ponders the reason behind the tradition (and to be fair I’ve pondered it many a time too! ) when a young woman approaches her, whispers and slips a note into her pocket. I just got the sense that a whole host of lies are about to come tumbling out and I was not wrong at all! Dropping bombshells and revelations leave Paula reeling and unsure as to whether her whole life with Thomas was based on a lie. Paula’s brother-in-laws Father Joe and Bill were two very different men and along with her sister-in-law, Daphne, they were the only family she had left. But could Paula trust them to tell her the truth about her husband? Once again Michael J Malone proves that he can nail an opening scene. And bang I’m hooked!

Good use of the Scottish dialect warms the cockles of my heart so it does, the old funeral purvey is something we in the West of Scotland are all familiar with. Michael really does provide that very real sense of place from the streets of Glasgow to the small island of Bute, with dialect and familiar places. It was so easy to simply slot myself into the narrative and get lost in the reading experience.

I loved the narrative of loneliness against the modern-day desire to own, to possess and to live life through the lens of a smartphone. There was something so poetic in the way that he wrote Paula’s grief it made my heart ache. Paula was a difficult woman to feel sorry for despite all of this. She felt almost aloof compared to the other characters. Far removed from the harsh realities of life she came across as quite cold and self-indulgent however as we dug deeper into her character and her life experiences we began to understand her a little bit more. For me, it was when she was with Cara that she really came alive. The two women, so very different, brought out the best in each other and their relationship in this book was brought to life through the authors’ talent.

I liked Cara, she has that typical Glasgow toughness about her but at the same time, that inner nagging self-doubt that is West of Scotland folks judge themselves on daily. The part where she meets Paula but suddenly feels that she is “not worthy” as her life is materially much poorer than Paula’s. These little character nuances make the characters so much more believable and multidimensional

Cara is an Advocacy Worker and Michael J Malone gave an authentic portrayal of some of the casework that Advocacy services deal with and a totally realistic picture of a local authority system that is as damaged as those it is meant to provide services for. There was a real sense of social justice going on here as the issues of addiction, homelessness and poverty were all explored.

Cameo appearances from a couple of well-known faces brought a smile to my face! I’m sure that they will forgive you, Michael!

There were so many twists and turns that by the end I was dizzy! A sense of mistrust developed throughout the book as I met each character, who to trust and who to fear? The moments of suspense slotted in effortlessly providing an authentic and compelling reading experience. Once again Michael J Malone has wowed me with another irresistible read!

After He Died is available to purchase from:

Michael Malone is a prize-winning poet and author who was born and brought up
in the heart of Burns’ country. He has published over 200 poems in literary
magazines throughout the UK, including New Writing Scotland, Poetry Scotland
and Markings. Blood Tears, his bestselling debut novel won the Pitlochry Prize
from the Scottish Association of Writers. Other published work includes:
Carnegie’s Call; A Taste for Malice; The Guillotine Choice; Beyond the Rage; The
Bad Samaritan and Dog Fight. His psychological thriller, A Suitable Lie, was a
number-one bestseller, and the critically acclaimed House of Spines soon
followed suit. A former Regional Sales Manager (Faber & Faber) he has also
worked as an IFA and a bookseller.