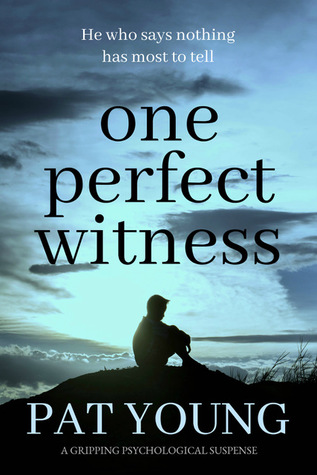 I’m delighted to be a part of the #BlogTour for Scottish author, Pat Young’s third novel “One Perfect Witness”. Thanks to Bloodhound for inviting me to take part and to the publishers for the ARC for review.

Before  I share my thoughts, here’s what the official blurb says:

On a remote Scottish hillside, three paths meet. On each path, a boy, one carrying a gun.
When their paths cross, a shot is fired and a boy dies.
That leaves two – one killer and one perfect witness.
This killer will stop at nothing to make sure the witness says nothing. Difficult for most people, even for someone who’s been guarding a secret of his own for five years.
What if the witness decides he’s been silent too long? Sometimes even the unspeakable must be spoken if we can find the words.

Kicking off with a behind the scenes view of a holiday park in Ayrshire I was immediately transported back to my childhood as memories of holidays on the Ayrshire coast filled my head. But this was no happy family moment and it became immediately clear that there was an underlying tension between Richard & Viv caravan park owners with son Charlie stuck in the middle. Charlie sneaks off to get his father’s gun with one thought in his mind – “tomorrow they will remember me”…

Three boys, one path and a meeting that will change their lives forever! Oh, my heart went out to Charlie. I could sense a lot of pain about him but at the same time, there was a feeling of darkness surrounding this character. Despite his young years, the author was able to weave an air of trouble into the character yet at the same time make the reader feel protective of him.

We also meet the two other characters who are taking the path that fateful moment; Gus is in Scotland from South Africa trying to make his name in international rugby but Gus has a bit of a reputation for his temper and this may be his downfall. Sebastian has come over to Scotland from France to work the summer in the Brackenbrae Holiday Park yet there is a real sense that he has run away from something back in France and is not just coming over for the work experience. Through the narrative, we learn a little more about each character and this helps the reader make sense of the tragic events.

I can’t say too much without giving away spoilers here but Charlie definitely stole the show for me in this novel, his anguish and pain are palpable and at times I wanted to slap his parents as they couldn’t or wouldn’t see what was going on with him.

I felt a real sense of injustice as I read and I was willing it all to come right in the end. Whether it does or not, you will just have to read it and see. It is not a fast-paced thriller but more a slower paced exploration of relationships, circumstances and “what ifs”. I was left with a few questions unanswered but sometimes that can be a good thing as it leaves you pondering long after the last page has turned!

A cracking sense of place was created by the author and you can tell she knows the area well. I loved the visuals that this book brought to mind as I read.

One Perfect Witness is a cracking read that will keep you engaged until the very end and leave you wondering for just that little bit longer.

One Perfect Witness is available to purchase from:

Pat Young grew up in the south-west of Scotland where she still lives, sometimes. She often goes to the other extreme, the south-west of France, in search of sunlight.
Pat never expected to be a writer. Then she found a discarded book with a wad of cash tucked in the flyleaf. ‘What if something awful happened to the person who lost this book?’ she thought, and she was off.
Pat knew nothing of writing, but she knew a thing or two about books, having studied English, French and German at Glasgow University. A passion for languages led to a career she loved and then a successful part-time business that allowed her some free-time, at last.
Pat had plans, none of which included sitting at her desk from daybreak till dusk. But some days she has to. Because there’s a story to be told. And when it’s done, she can go out to play. On zip-wires and abseil ropes, or just the tennis court.
Pat writes psychological thrillers. Her debut novel Till the Dust Settles has been awarded the Scottish Association of Writers’ Constable Stag trophy. Following publication in July
2017 Pat was delighted to be chosen as an ‘emerging talent’ for Crime in the Spotlight and read from Till the Dust Settles to an audience at Bloody Scotland – another dream come true.
Published by Bloodhound Books, I Know Where You Live is the much-anticipated sequel to Pat’s gripping and unmissable debut thriller, Till the Dust Settles. It too is a psychological thriller with a skillfully told story that makes for an enjoyable stand-alone read. It will hook you from the start.
One Perfect Witness, Pat’s third novel to be published, tells a completely new story. If, like Pat, you’re fascinated by what happens when someone disappears, you’ll enjoy this book of secrets, lies and deception.
Links:
Twitter – @py321_young

One thought on “#BlogBlitz #OnePerfectWitness by Pat Young @py321_young @BloodhoundBook”