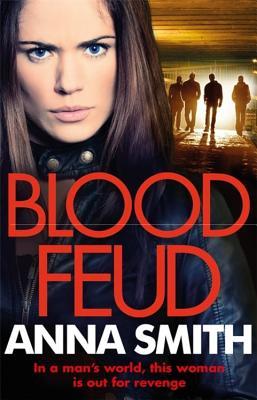 Having read Anna’s Rosie Gilmour series a number of years ago, I was delighted to bump into the author at this year’s Bute Noir Festival and pick up a copy of the first in her latest series, Blood Feud.

They came for her family. Now she’s coming for them. This nail-biting thriller introduces Glasgow’s newest gangland mistress, Kerry Casey.

Kerry Casey thought she’d made a life away from the dirty dealings of her gangster family. Her father wanted to make them legit – her brother Mickey had other ideas, and now it’s got him killed. When Mickey’s funeral turns into a bloodbath at the hands of a group of anonymous shooters and Kerry’s mother is killed in the crossfire, Kerry finds herself at the head of the Casey family, and desperate for revenge.

Running a crime empire is not a job she ever asked for, and not one she wants, but Kerry is determined to fulfil her father’s wishes and make the Caseys go straight. First, though, she will find the men who murdered her mother, and she will take them down, no matter what it costs.

Betrayal and revenge are key themes as Kerry Casey finds herself at the head of a family empire that she has no interest in or experience of. She might have lived a sheltered life away from her family in Glasgow following the death of her father many years ago,  but her heart is driven to seek revenge for the wrongs done to her. Can Kerry turn her back on the right side of the law and jump the fence over to the dark side?

There was plenty of action, fast paced and fast reading moments in this edgy Glaswegian Gang thriller. This combined with the development of relationships between characters resulted in an engaging and compelling read.

I enjoyed Kerry’s character and while I thought that she adapted to her new life a little too easily, I still found her an engaging character who intrigued me. Her relationship with a man from her past is one that I hope will be explored further as the series goes on.

However, it was Maria Ahern and her son Cal who stole my heart in this one; I engaged with both characters immediately and really felt myself empathising with their situation. A few gut-wrenching moments for them both and I enjoyed how the author drew them out as the book developed, especially Cal and I can see him being a big player in future books. It was a frighteningly depressing but realistic tale of the different paths people’s lives can take sometimes through what seems to be an unlucky roll of the dice.

Strong female protagonists proving that the female is definitely more deadly than the male; drugs, human trafficking, betrayal versus loyalty; from Glasgow to Manchester to Amsterdam to Spain this one is blowing the Scottish gang scene global. The authentic and gritty language will not please the “no swearing brigade” but come on its Glasgow, it’s Gangland and the C word is a term of endearment up here!

This one has got everything you are looking for in a gangland crime novel. It’s gritty, it’s raw and hard-hitting. No punches pulled as the story plays out in front of you. A cliffhanger ending means that the countdown is on until the second in the series is released next year!

Blood Feud can be purchased via: 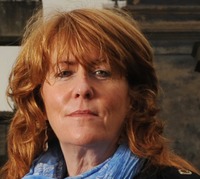 Anna Smith is an award-winning journalist who spent a lifetime in daily newspapers, reporting from the frontline all over the world. She has covered conflicts from Somalia to Rwanda to Kosovo, where she witnessed the plight of tragic refugees, genocide and hideous ethnic cleansing. She has also worked on major investigations, unmasking drug dealers and paedophiles, as well as reporting on the Dunblane Massacre, to 9/11, where she was one of the first journalists on the scene in both world-shaking events.

She writes novels full-time now, using her vast experience as a journalist to create the hugely popular Rosie Gilmour character, a gritty Glasgow journalist who tears down the walls of corruption and will stop at nothing to get her story. Anna lives between her homes in Scotland and the West of Ireland – and also in Spain to escape the British weather.

Her highly acclaimed debut novel, The Dead Won’t Sleep, was the first in the series, exposing corruption and child abuse at the very top of the establishment, echoing real news stories that are being reported at the moment, even though the novel was published three years ago.