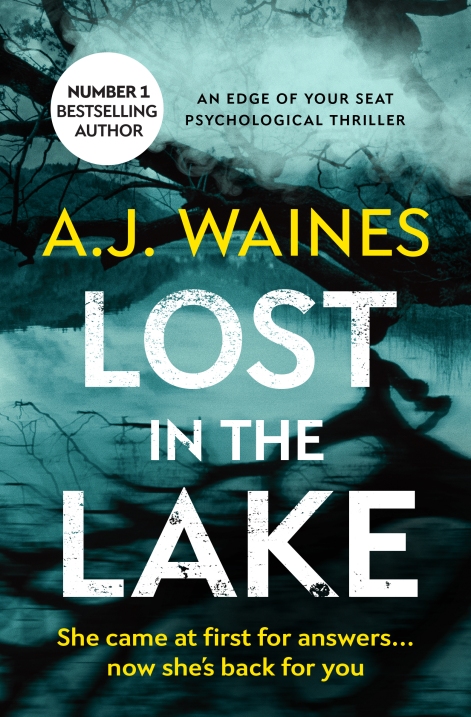 I’m delighted to be taking part in the Blog Tour for AJ Waines “Lost in the Lake” and a huge thank you to Bloodhound for inviting me to participate.

Amateur viola player Rosie Chandler is the sole survivor of a crash which sends a group of musicians plunging into a lake. Convinced the accident was deliberate, but unable to recall what happened, she is determined to recover her lost memories and seeks out clinical psychologist, Dr Samantha Willerby.

But Rosie is hiding something…

Sam is immediately drawn to the tragic Rosie and as she helps her piece the fragments together, the police find disturbing new evidence which raises further questions. Why is Rosie so desperate to recover her worthless viola?

When Rosie insists they return to the lake to relive the fatal incident, the truth about Rosie finally emerges. Now Sam is the one seriously out of her depth…

Rosie Chandler is desperate to uncover her locked memories from the night of a terrible tragedy and she turns to psychologist, Sam Willerby for help, but does Rosie want more than Sam is prepared to give her and just how much can Sam trust in what Rosie is telling her. I read this one with the creepy horror film soundtrack playing in my head!

Right from the outset you just know that Rosie Chandler is bad news but there is also something ever so endearingly vulnerable about her that draws people in like moths to a flame. Her horrific childhood would reduce even the hardest professional to tears and it is clear that she is suffering greatly from the traumas she has experienced. She was a bit of an enigma and it was difficult to know when she was lying or telling the truth but it was clear that she was in need of some form of help that’s for sure!

As I hadn’t read the previous book in the series I had no preconceptions of what to expect from Sam. I’m now interested to go back and read the first one to find out just a little more about her and what makes her tick. If I’m totally honest at times she really irritated me and I found her inability to say no to Rosie infuriating at times, although, I could understand why she was reluctant to let her go. I didn’t dislike Sam’s character, I just wanted to understand her a little better. Sam’s sister, Miranda and their relationship is also intriguing and I engaged well with Miranda as a character and could understand her frustrations at Sam constantly checking up on her but also got the sense that Miranda, at a subconscious level appreciated and indeed welcomed this.

The plot is certainly twisted and chilling and as a reader, I was constantly re-evaluating what was truth and what was lies; just what memories did Rosie have and what exactly was it she was hiding from Sam? The whole topic of memory loss and retrieval, especially in the area of trauma, is a fascinating subject in itself and this engrossed me throughout. I wanted to go and find out more about the subject and treatment!

I could imagine Lost in the Lake transferred onto the big screen, it would work perfectly as a psychological thriller. A dark and twisted journey into memories and the mind that will have you checking the doors behind you and looking under your bed before you go to sleep!

Lost in the Lake is available to purchase from:

AJ Waines is a number one bestselling author, topping the entire UK and Australian Kindle Charts in two consecutive years, with Girl on a Train. Following fifteen years as a psychotherapist, the author has sold nearly half a million copies of her books, with publishing deals in UK, France, Germany, Norway, Hungary and Canada (audio books).

Her fourth psychological thriller, No Longer Safe, sold over 30,000 copies in the first month, in thirteen countries. AJ Waines has been featured in The Wall Street Journal and The Times and has been ranked a Top 10 UK author on Amazon KDP (Kindle Direct Publishing).

She lives in Hampshire, UK, with her husband. Find her books here and visit her website and blog, or join her on Twitter, Facebook or on her Newsletter.