This post brings you, Owen Mullen,  a Bloody Scotland McIlvanney Crime Book Of The Year long-listed novelist. His latest novel And So It Began is a Sunday Times Crime Club Star Pick.  so let’s here Owen’s rebellious tale!

Rebelling On An Empty Stomach

My rebellions have tended to be quiet affairs which have often gone unnoticed. When I have rebelled, I’ve been spectacularly unsuccessful. The story I’m about to tell you happened a long time ago, but even now it makes me cringe.

I was about twenty years old and in a group – long hair, attitude, all that. And we had a strict rule. No booze on days when we had a gig. I didn’t mean to rebel, it just happened: the force of circumstances was too powerful to resist.

One Saturday morning a roadie came to my house and asked if I wanted to go to a football match later that afternoon in Glasgow. I did. So we met in the pub – how many tales of disaster begin with that line? – and had a few beers. Then we bought some more for the game. On the way there, a rival fan threw a bottle at the bus and smashed the window where I was sitting. I casually brushed shards of glass off me and carried on with the fascinating conversation I was having with a guy who raced pigeons.

As for the game, don’t remember who won. After a while, it didn’t seem to matter very much. What did matter was getting to the pub because the van was picking us up. To pass the time we had a few more drinks – as you do – and waited. They were running late, so we had a few…you get the idea.

Understandably, when my bandmates eventually arrived they weren’t pleased to find their bass player legless. But – and this is important – until this point, the night was still salvageable.

The gig was the Flamingo in Paisley Road West.

[think it’s a bingo hall now. Maybe I had something to do with that]

The ‘Flam’ had been a ballroom for decades and had two stages; the big stage where a resident 1950s style big band [sax, trumpets, trombones] played, and a smaller stage for guirar groups like us. The big stage was on the other side of the dance floor, the smaller one reached by turning left out of the dressing room and then right.

I made the mistake of not bothering to do a sound check, deciding a better idea would be to hit the pub without going near the ballroom. The point of no return had been reached. [good job this isn’t a book. You can already tell where it’s going, can’t you?]

In the Quo Vadis, I remember one heavy-looking guy taking exception to me chatting-up his girlfriend. Getting out of there was the only decent idea I’d had all day. Then I realised I hadn’t had anything to eat since breakfast – no wonder I was pissed. A Chinese takeaway curry sorted that. Eventually, I rolled up to the gig and knocked on the back door of the Flamingo. Don’t recall who let me in but somebody did.

Of course, I was persona non grata. Explaining I was living the rock ‘n’ roll lifestyle wouldn’t impress them very much. They left me struggling to stay upright in my platform heels. [told you it was a long time ago]

Boy, did the Fender feel heavy.

The bastards had started without me!

I dragged on the guitar, almost falling over the lead, turned right into the corridor and left, stumbling onto the stage. I plugged in and started playing. That’s when I noticed this guy looking at me funny. I didn’t recognise him but carried on. My error revealed itself to me in slow motion. Through an alcohol haze, the familiar faces of the guys in my group began to take shape.

They were shaking their heads. The ‘50s band wasn’t there anymore. My group was on the big stage. Which meant I’d plugged in with a group I’d never seen before.

Imagine how surprised those guys must have been. There they were, rocking Proud Mary when some mad drunk geezer rushes on and joins in.

The rest of the night was a blur though apparently, I played a blinder.

Hahahaha, this is brilliant, I am howling! And even better here’s the picture of Owen in the band…which one do you think is him!

You can buy Owen’s books over at Amazon 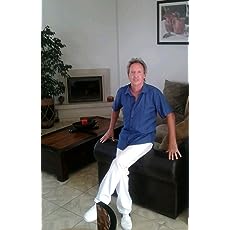 Owen Mullen graduated from Strathclyde University, moved to London and worked as a rock musician, session singer, and songwriter, and had a hit record in Japan with a band he refuses to name; Owen still loves to perform on occasion. His passion for travel has taken him on many adventures from the Amazon and Africa to the colourful continent of India and Nepal. A gregarious recluse, he and his wife, Christine, split their time between Glasgow, and their home away from home in the Greek Islands where the Charlie Cameron and Delaney series’, and soon to be released psychological thriller were created.