Douglas Skelton is a top Scottish author who has written 14 books including true crime as well as fiction. If you haven’t read his books then you are really missing out!

This tale from Douglas is fascinating as I know the case he is talking about, as will many Glaswegians who grew up in the 1970s and 80s. It was one of the biggest miscarriages of justice in Scotland

I didn’t know I was rebelling.

To be honest, when I first started on the case, I thought it was just a chapter in a book.

Almost ten years after, I was still involved.

In fact, I didn’t realise there was more than a whiff of rebelliousness until a friend of mine – an ardent Tory, it must be said – asked, “You’re not going completely against the establishment, are you?”

The answer, it turned out, was yes.

But it gave me sleepless nights.

The case in question was what would eventually become an acknowledged miscarriage of justice. Out of respect for the dead, the survivors, the then accused and the witnesses I won’t name the case but anyone who desperately wants to know can find out with ease.

It was back in 1991 and I was about to have my first book published. ‘Blood on the Thistle’ was a compendium of true-life Scottish murder cases of the 20th Century and my publisher asked me to include this particularly notorious and tragic case. In my naivete, I said yes but soon learned a single chapter would not cut it.

In the timescale, I had it would have been a simple job to use the extensive press coverage of the trial but something told me that wouldn’t be enough. So I contacted the solicitor of one of the accused and asked to see him. It was he who disabused me of any notion of a solitary chapter. He threw open the door to a small office and pointed at the piles of papers, files, memos, transcripts, statements and records that stretched from the floor to the ceiling.

“That,” he said, “is the file for this case. If you want to do this job properly then you’ll go through every single piece of paper, read every word, and reach your own conclusions.”

A gauntlet had been thrown down and I picked it up.

And so began one of the most exciting, terrifying, satisfying and exasperating ten years of my life.

I enlisted the aid of a journalist pal, Lisa Brownlie, and together we set out to read the material and contact witnesses. It took us months to pull it together but in the end, we had the makings of a book, which was published in 1992.

People tried to put us off. We were warned we were putting ourselves in danger, for there were some heavy underworld names involved. The powers-that-be tried to stonewall.

But the book had set a stone rolling. That stone picked up momentum and soon there was a campaigning avalanche falling down on the legal establishment.

Eventually, I had a meeting with a depute procurator fiscal in Glasgow during which I was unusually forthright in my opinions. As I handed over documents, I told him that there will be an impulse to sweep it all under the carpet, to fall back on procedure. I warned him this was not going away. I said that the case did not heap glory upon the Scottish legal system. I urged him to speak up, to allow it to be properly investigated.

I don’t know if he did but it took some years before it finally came to an end, with a judgement in an Edinburgh courtroom and much punching of the air. Along the way, there were setbacks, disappointments, more death, and attempts to put everyone concerned off.

There was even a suggestion that my home phone had been tapped and – when one of the accused men escaped from jail to publicise the campaign – fears that police would come to take me in for questioning. I don’t think that was ever on the cards but that was the cause of the sleepless nights.

There were moments when it all got too much for me. It was too big a story. The odds against us were too great. There were too few people ranged against an entire system.

But, slowly, we made headway. People came over to our side, recognised that there was something deeply wrong with the case. Journalists. TV producers. Other writers.

Did I feel like a rebel at the time?

No. there was too much going on. Too many interviews to do, too many words to be transcribed, too many people to find.

But now that I look back at it, we were rebels. We bucked the system. We spoke what we thought was truth to power.

But only because, in the end, the system we were fighting came over to our side.

Thank you, Douglas, this one is a must read for all true crime fans! 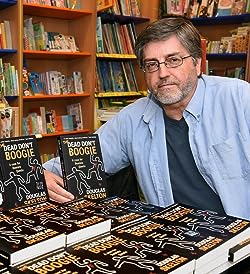 Douglas Skelton, shortlisted for Scottish Crime Book of the Year 2016, is a writer who specialises in the darker side of things: he’s a former journalist who has published eleven true crime books. In 2011 he made the leap to writing crime fiction, beginning with the hugely successful series of Davie McCall thrillers and continuing with the Dominic Queste series: The Dead Don’t Boogie and Tag – You’re Dead. His latest thriller, The Janus Run, is NYC noir at its finest.