This post is brought to you by the author of “A Murder of Crows”, Ian Skewis.

Rebel.
noun. A person who rises in opposition or armed resistance against an
established government or leader.

Okay, so that’s the official description over and done with, but what exactly
is a rebel to the likes of you and me?
It’s all in the eye of the beholder, I think. One person’s rebel is another
person’s hero. One person’s hero is another person’s traitor. And so on.
Scratch the surface and all of us have a rebellious streak, but what exactly
does it mean to rebel? It seems an archaic and somewhat romantic notion.
James Dean springs to mind. Che Guevara perhaps. What exactly are we
rebelling against these days, I wonder?

As a gay man, I’ve always felt like a rebel simply because of my existence.
Less so now, admittedly, as the Western World finally begins its crawl
towards common decency, and recognises our right to be treated the same
way as everyone else, regardless of our sexual preferences.
But nothing ever stands still. As the EU decide that everyone should play fair
and pay their taxes, certain members of our establishment, most notably the
rich and the shameless, have decided they want out.

I wonder why?
The timing of Brexit is certainly fortuitous — for them. After all, they
engineered it. They advertised it as something to be proud of.
And the public said yes.

But we all know that Brexit has been nothing but one big lie after another. It’s
entirely in the interests of those who want to privatise everything in favour of
big business and to hell with how it affects those who can’t afford it. It’s all
about the money. That’s all that matters to them in the end.
But yes, they said.

And, as usual, they play their tricks and turn man against man, and so
certain individuals with small minds and inhumane opinions are given airtime
and platforms to spout their vile messages from. Every now and then another
malicious soundbite is delivered, and they watch as the rest of us argue
amongst ourselves, whilst they quietly dismantle our NHS behind our backs.

Meanwhile, the unsuspecting vote with their feet and give these creatures,
who promise everything and deliver nothing, time and permission to inflict
more damage on our infrastructure and our sensibilities. Yes, yes, yes, they
said.

I can foresee a time where I might have to slam my perfectly structured
handbag into the faces of those who loudly proclaim that I no longer have
the right to exist. I hope that things have moved on enough for me not to
have to do this, but it’s really quite fragile our society. What’s done can
always be undone.

Certain figures of suspicious authority brand migrants as criminals, and their
sympathisers say yes, once more — and neither see the irony. The cold, hard
truth is that they, the stirrers of prejudice and those who voted for them, are
the criminals, for they have contributed, directly or indirectly, to the suffering
of many.

Do I feel like a rebel writing this? A little bit, because I can’t help thinking this
was not what I intended to write. But sometimes fiction isn’t enough. I’m a
writer of fiction, but I’m also part of this community. I’m a citizen of the
world. I might be correct in my assertions, I might not be. But I wrote this
from a place that counts. That’s more than can be said for the heartless, who
pretend to support our nationwide interests, whilst surreptitiously bleeding
us dry.

So, if I feel the need to stand up for common decency against a new dawn of
hate and narrow-mindedness, then, of course, I am proud to be a rebel, in
my own small authorly way.

And as for you, you might not consider yourself a rebel at the moment, but
you might have to.

They say yes. And their dreams become our nightmares. We can change it. If
we want to. There are far more of us than there are of them. Sometimes they
need reminding of that, for it’s not always enough to stay silent and hope
that it all goes away.

What is a rebel? asked Albert Camus, the famous French philosopher.
A man who says no.

Brilliant Ian! Thank you! This really stirred up my inner rebel that’s for sure! I’d love to hear folk’s thoughts on Ian’s piece? 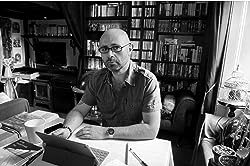 Ian Skewis was born in Scotland and was a professional actor for many years before moving on to writing.

His short story, Inkling, was published in an anthology called The Speculative Book.

His debut novel, A Murder Of Crows, became a No.1 Bestseller. It is available on Kindle, Paperback and Audiobook.