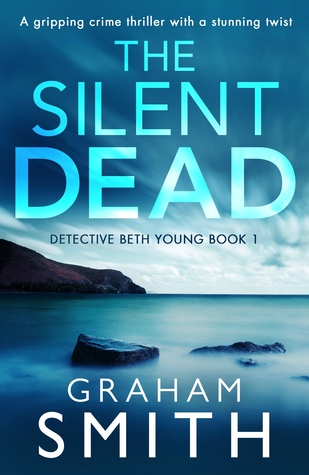 As a beta-reader for this book, I was delighted when Bookouture signed Graham Smith in a publishing deal for his latest series featuring Detective Beth Young. The Silent Dead is the first in the series and it gives me great pleasure to be taking part in the opening day for the blog tour for this. Thanks to the publishers and to the author for the ARC to review.

He’d found an angel for his collection. But one angel at a time was never enough…

Detective Beth Young has just joined the Cumbrian major crimes team when a body is found posed in a ritualistic manner – arms spread and graceful wings attached – at a crumbling castle in the hills of Lake District.

The entire police force are on red alert. But Beth begins to feel she’s the only one who can follow the disturbing clues left by the twisted killer. Because she doesn’t think like everyone else. To Beth, crimes are puzzles she can solve. Even if real life is a little harder.

As more bodies are discovered in derelict stately homes across the Lake District, she knows she’s in a race against time.

But the killer is looking for another darling to add to his collection… Will Beth be able to save her? Or will he get there first?

Graham Smith certainly knows how to open a book with a bang! And for new bride Emily Welton, her wedding day is not going to be one she forgets in a hurry!

DC Beth Young newest recruit to the Force Major Investigation Team and is not enamoured by her boss DS Thompson tries to belittle her. His reaction when first seeing her doesn’t shock her and for Beth, this is not unusual. Thompson is insensitive and a glory thief. Yet the more we get to know about Thompson the easier it is to understand him.

We learn about Beth’s motivation for joining the police and her ambition to become a detective. At times she is astute yet a little naive. I’m looking forward to her character developing as the series unfolds. I’m keen to see how her relationship with DC Unthank, the most placid and perhaps sensitive member of the team develops.

DI Zoe O’Dowd heads up the team and she is a formidable leader who Beth is eager to impress. O’Dowd is direct and straight to the point, she definitely takes no prisoners in her approach, but there is also a sense of understanding and empathy that lies beneath her stern exterior.

With the team there is a real feeling of getting to know them in this first book in the series, uncovering their quirks and their personalities and helping the reader understand what makes them tick. It paves the way and whets the appetite for the readers’ anticipation for what is going to come next.

The author provides his readers with a great sense of place and he certainly brings the streets of Carlisle and Cumbria to life. Some of the places I recognised and those that I didn’t I felt as though I were there in the heart of the story.

Plenty of clues and red herrings are provided with the narrative and with two unknown narrators we get a voyeuristic feeling as they talk of watching their angels. There was something very creepy and disturbing reading from their point of view. Caught in their sights is car salesperson, Sarah Hardy and I loved her character, the reader may have one idea about her when they first meet her but like all good characters just scratch beneath the surface to find out what’s really going on.

Graham Smith is excellent at creating characters which lead the reader to make assumptions about them before he picks away and slowly reveals what lies beneath and some you will like even more after the reveal while others will leave you cold and afraid!

The dark and quite twisted murders demonstrate the darkness that inhabits the author’s mind! You certainly don’t want to be getting in his wrong side and being killed off in a book because it ain’t going to be pretty!

The Silent Dead is a great start to what promises to be an exciting new series from Graham Smith.

It is available to purchase from

Don’t forget to check what the other bloggers are saying

Graham Smith is the bestselling author of four explosive crime thrillers in the Jake Boulder series, Watching the Bodies, The Kindred Killers, Past Echoes and Die Cold. Watching the Bodies spent over two weeks at number one in the Amazon UK chart and Amazon CA charts. Graham is also the author of the popular DI Harry Evans series and has collections of short stories and novellas. His latest novel – The Silent Dead is published by Bookouture and set in Cumbria / the Lake District, featuring DC Beth Young.

He is the proud father of a young son. As a time served joiner he has built bridges, houses, dug drains and slated roofs to make ends meet. Since 2000 he has been manager of a busy hotel and wedding venue near Gretna Green, Scotland.

An avid fan of crime fiction since being given one of Enid Blyton’s Famous Five books at the age of eight, he has also been a regular reviewer for the well-respected review site Crimesquad.com since 2010.

When not working, his time is spent reading, writing and playing games with his son. He enjoys socialising and spending time with friends and family.